Die Antwoord is Zef till Def

The June 12 show has been postponed. 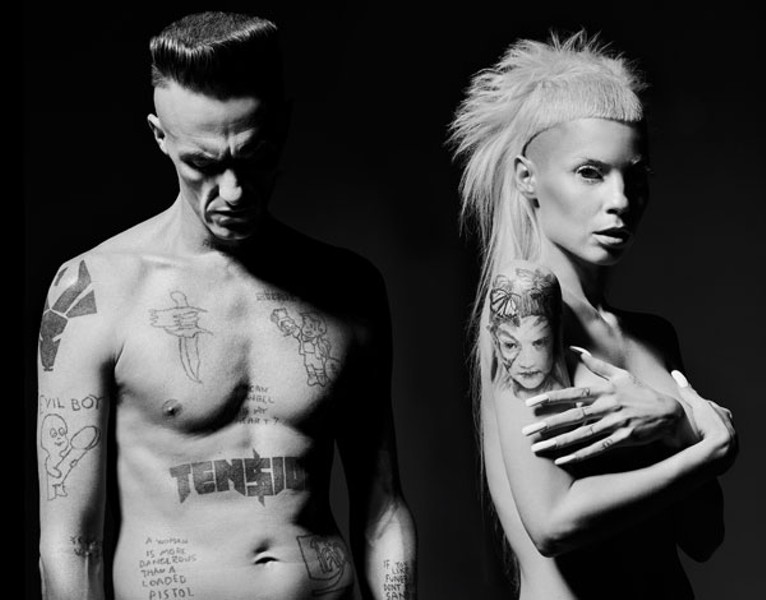 Chances are you didn't hear Die Antwoord the first time you thought you heard them. You saw them and remembered them for their sometimes hilarious, sometimes haunting videos.

Consider the video for "Pitbull Terrier," the latest single from the South African rave-rap trio's early June release Donker Mag. Ninja, Die Antwoord's male emcee, wears a remarkably lifelike pitbull mask and a garishly exaggerated spiked collar; he races around on all fours, alternately mauling and humping people. Ninja's female counterpart Yo-Landi is creepy and spectral in stark white body paint and blacked-out eyes; she flies around doing martial arts, and after Ninja's hit by a bus, spits in his mouth to revive him. It's utterly confusing to the sensibilities, simultaneously tickling and titillating and nauseating.

That's been Die Antwoord's bewildering modus operandi since taking the Internet by storm with the visually visceral "Enter the Ninja" in 2010. (Think: A mix between Aphex Twin's creepier moments and Da Ali G Show.) The music — aggressive dance beats laced with tongue-rolling hip-hop flow and manic pixie trills — always seemed secondary, serving only as a soundtrack to the Die Antwoord's irony-soaked caricature of the South African counter-culture movement zef, once described in The New York Times as "the nasty, freaky, gleefully trashy underbelly of post-apartheid white South African culture." Not too long after the group burst forth from Cape Town, Pitchfork ran a profile with the probing headline "Who the Hell Are Die Antwoord?"

Four years later, much of the mystery has worn off, as the band gets set to roll into Amos' Southend on June 12 (NOTE: This show has been postponed). Their real names have been revealed: Ninja was born Watkin Tudor Jones; Yo-Landi, Anri Du Toit. (The third crew member is Justin De Nobrega, aka DJ Hi-Tek.) And what seemed like overnight success had been decades in the making. Jones, who's been cranking out satirical hip-hop in South Africa since the mid-'90s, is something of a South African Kool Keith; before they were Die Antwoord, Jones and Du Toit performed as The Constructus Corporation, creators of a three-hour, book-accompanied album satirizing consumerism and corporate power.

But satire, Jones has long argued, isn't the point of Die Antwoord.

"I'm just engaging my inner zef, which everybody has," he told South Africa's Times in 2010, referring to the South African redneck-cum-hood rich counter-culture movement. "It's not a persona, it's an extension of myself, an exaggerated version of myself."

The mystery may have worn off, but the exaggeration remains — as does the shock value, which isn't hollow, often opting for biting social commentary. But while Die Antwoord's visual game is strong, it's hard to sometimes extricate the music from its visual accompaniment, often to the detriment of the songs. "Pitbull Terrier," for instance, stumbles as a stand-alone song; it sounds woefully dated, with Jones' barking bravado less junkyard dog and more paper tiger.

The not-even-trying-to-be-subtle "Cookie Thumper," the first track leaked from Donker Mag, fares better, mostly on the strength of Hi-Tek's garish carnival-house beat, and Du Toit's rapid-fire rhymes, spit in a hodgepodge of English and her native Afrikaans. Even the hypersexed group's best songs — like Ten$ion's "I Fink U Freeky," a bleeping and sinewy dancefloor anthem — remain so willfully obsessed with ninjas and ejaculate as to be grating by sheer repetition.

"It's, like," Jones quipped to the Guardian in 2010, "is this [Die Antwoord] fucking terrible, like fucking retardedly the worst thing ever or the most amazing thing in the entire universe?"

The answer's somewhere in between. Maybe Die Antwoord isn't worth a deep listen, but its compelling visual spectacle is certainly worth seeing.