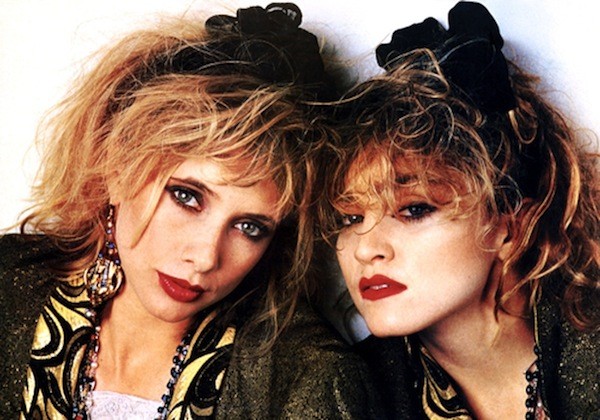 DESPERATELY SEEKING SUSAN (1985). Oozing New Wave attitude and drenched in NYC ambience, director Susan Seidelman's Desperately Seeking Susan is perhaps best known for capturing Madonna in that period of time when her career was beginning to go supernova. Soon to be revealed as a wretched actress in such bombs as Shanghai Surprise and Who's That Girl, she's actually just fine here, since her entire performance is based more on appearance and sex appeal than on any semblance of thespian ability. She plays the Susan of the title — actually a supporting role, since the lead is Rosanna Arquette in the role of her career. Arquette stars as Roberta Glass, an unfulfilled housewife who escapes her dull life with husband Gary (Mark Blum) by tracking the exploits of the free-spirited Susan via messages that appear in the classified ads. A bump on the head results in Roberta believing that she's Susan, resulting in a series of adventures involving a hunky projectionist (Aidan Quinn) and a murderous stalker (Will Patton). Leora Barish's passable script is greatly enhanced by Seidelman's style and the efforts of Arquette and Madonna. The supporting cast is especially eclectic, including among its ranks musician-actors John Lurie, Ann Magnuson and Annie Golden, imposing character actor (and former Sex Pistols bodyguard) Rockets Redglare, and comedian Steven Wright. Plus, John Turturro, Giancarlo Esposito and Richard Edson all turn up in small roles — did Spike Lee watch this flick immediately before casting Do the Right Thing?

Blu-ray extras consist of audio commentary by Seidelman and producers Sarah Pillsbury and Midge Sanford; a feeble alternate ending (actually, more of a continuation) that fortunately was voted down by preview audiences before the film's release; and the theatrical trailer. Alas, not included is the music video for Madonna's "Into the Groove," the hit single introduced in this picture.

INTO THE STORM (2014). For a movie that felt like an also-ran afterthought in the blockbuster summer season, Into the Storm features some excellent visual effects that, in their own way, are about as impressive as anything else I've seen created by CGI wizards this year. Whether it's a stationary airplane or a struggling person being whisked into the sky by one of the record number of tornadoes destroying the town of Silverton, the effects (visual and aural) are both ferocious and frightening — and hold up well on Blu-ray. Unfortunately, they're wasted in the service of a film that's otherwise a slog to sit through, thanks to a pedestrian script, bland characters, and yet one more ill-advised use of the "found footage" format. Those professionally interested in the tornadoes include the yin and yang of storm chasers, a profit-motivated jerk (Matt Walsh) and a compassionate single mom (The Walking Dead's Sarah Wayne Callies). Those personally affected by the tornadoes include a single dad (Richard Armitage, back to normal size in between Hobbit films) and his two teenage sons (Max Deacon and Nathan Kress). The character-based sequences only provide connective tissue between the impressive bouts of destruction, and unless you count the fact that no one mentions global warming as a possible cause for the storms' irregularity or the fact that the inept high school principal (Scott Lawrence) looks eerily like Pres. Obama, there's not an ounce of substance or subtext. Welcome, then, to what's basically The Weather Channel: The Movie.

Blu-ray extras include a look at the creation of one of the storm sequences; a piece on tornadoes with meteorologist and star of Discovery Channel's Storm Chasers, Reed Timmer; and a featurette on a storm-chasing vehicle. 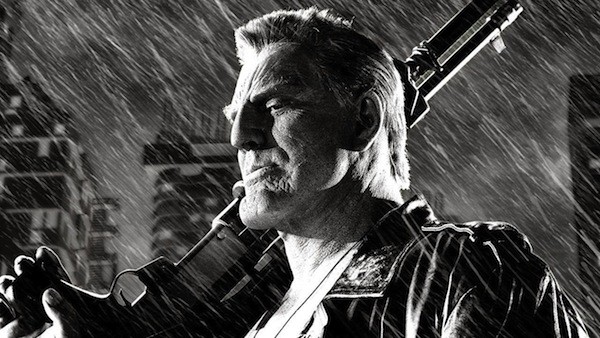 SIN CITY: A DAME TO KILL FOR (2014). Robert Rodriguez and Frank Miller serve up sloppy seconds with this sequel to the 2005 hit Sin City. The original offered dazzling visuals patterned after those found on the pages of Miller's graphic novels; this follow-up functions in the same manner, but whereas its predecessor showcased decent stories to further embellish the ocular assault, the sagas here are a feeble bunch, further hampered by continuity errors that suggest Rodriguez and Miller didn't even have any recollections of making a Sin City flick before this one. The heroes played by Mickey Rourke, Bruce Willis and Clive Owen all return in this combo prequel-sequel, albeit in altered versions. There was a line in Sin City about Owen's Dwight McCarthy having had facial reconstruction, and that's borne out with the casting of Josh Brolin as Dwight, giving us the man before he went under the knife. Yet while his different looks are explained, his different actions are not — simply put, it's impossible to reconcile the Dwight played by Brolin with the one essayed by Owen. Meanwhile, Willis' good cop Hartigan died in the first picture, so here he only pops up now and then as a ghost. Then there's Rourke's Marv, who emerged as an audience favorite in the first film. In fact, Marv's popularity explains his presence in much of this picture, as chronologically, it makes no sense for him to still be alive during at least one of the vignettes. Lastly, there's a new protagonist in the form of Johnny (Joseph Gordon-Levitt), a cocky gambler. Johnny's is the most interesting storyline, which makes it all the more frustrating when his saga ends on the most unsatisfactory note. Then again, it's hard to get too worked up about anything that occurs in this disappointing neo-noir; to paraphrase Chinatown, "Forget it, Jake; it's Sin City."

The Blu-ray contains the theatrical cut (offered in 3-D and 2-D) as well as an all-green-screen version. Extras include character profiles and featurettes on the makeup effects and stuntwork. 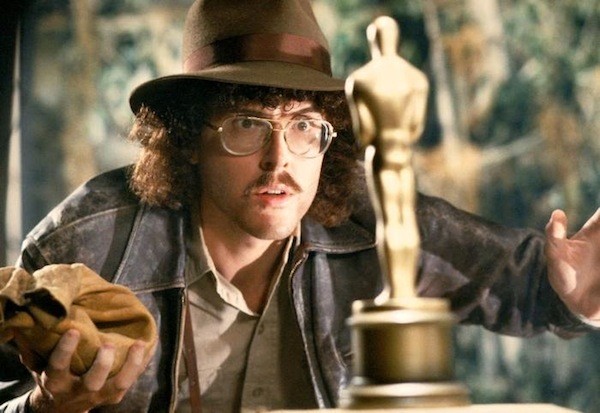 UHF (1989). A theatrical flop in 1989 but a DVD hit in subsequent years, this comedy stars Weird Al Yankovic as George Newman, a likable guy with a sweet girlfriend (Tea Party psychopath Victoria Jackson), a loyal best friend (David Bowe) and a knack for getting fired from every job he's ever held. His Uncle Harvey (Stanley Brock) puts him in charge of a failing TV station he won in a card game, and while it initially appears as if the tiny network will fold, an unexpected string of hits — shows like Wheel of Fish and Raul's Wild Kingdom — instead catapults it to the top of the ratings. In one of the extra features on the new Blu-ray release, Yankovic even admits that the flimsy plot was an afterthought, created only as a framework on which to place gags spoofing movies and TV shows. Given its feebleness, that's readily apparent, but the film largely works because of the parodies, which tackle everything from Raiders of the Lost Ark to Conan the Barbarian (reconfigured here as Conan the Librarian). A pre-Seinfeld Michael Richards co-stars as a dim-witted janitor who becomes the unlikely host of a hit children's series, while The Nanny's Fran Drescher appears as the station's aspiring news reporter.

Blu-ray extras include audio commentary by Yankovic and director Jay Levey; deleted scenes (with intros by Yankovic); behind-the-scenes footage; a retrospective panel discussion with Yankovic at this year's San Diego ComicCon; the music video for Weird Al's "UHF"; and production stills. Shout! Factory is also releasing The Compleat Al (sold separately), a mockumentary purporting to trace the life story of Weird Al; this DVD also includes eight classic music videos, including "Eat It," "Like a Surgeon," the hilarious "Ricky" and the brilliant, Devo-esque "Dare to Be Stupid." 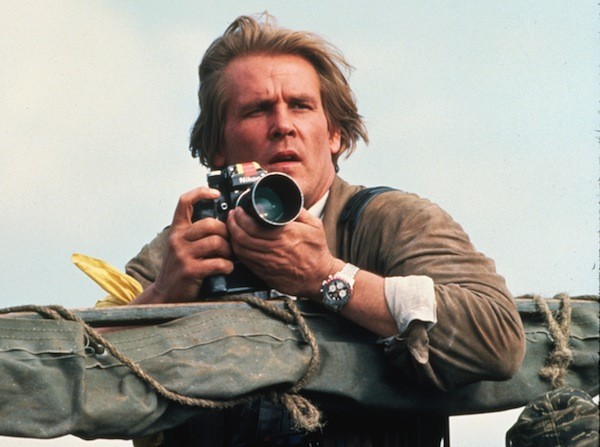 UNDER FIRE (1983). John Williams is clearly one of the all-time great film composers, so it's certainly no knock against him when I ask, why does he have five Academy Awards (against a record 49 nominations) while the late, great Jerry Goldsmith only has one (against 18 nods)? Goldsmith nabbed his solitary gold statue for 1976's The Omen but also provided the iconic music for such classics as Planet of the Apes, Chinatown, Alien and Star Trek: The Motion Picture (subsequently also employed as the main theme for TV's Star Trek: The Next Generation). His Oscar-nominated work on Under Fire may not be as famous as his more celebrated pieces, but it stands as one of his finest scores — excellent music for an excellent movie. Anyone who (like me) is a sucker for 80s political thrillers set in troubled foreign lands will find this a must-watch, in the same class as The Killing Fields, Missing, Salvador (like Under Fire, a 2014 Twilight Time release) and The Year of Living Dangerously. Nick Nolte delivers one of his finest performances as Russell Price, an American photojournalist who gets personally involved in the 1979 Nicaraguan revolution in which the Sandinistas attempt to oust brutal dictator Anastasio Somoza. Friends with reporters Alex (Gene Hackman) and Claire (Joanna Cassidy), Russell finds himself drawn to Claire after the power couple break up, and the film smoothly develops their relationship without ever compromising the harshness of the real-world backdrop. Cassidy and Hackman are terrific; ditto Ed Harris as a chipper mercenary and Jean-Louis Trintignant as a shady French operative.

THE BLOB (1988). The Steve McQueen starrer The Blob was a sizable hit back in 1958, but the box office wasn't as kind to this new-if-not-improved remake, which proved to be a sizable flop. Kevin Dillon (miscast) and Shawnee Smith (aptly cast) are the teens who try to stop the gelatinous creature that's destroying their town, and that's former Playboy Playmate and future Baywatch star Erika Eleniak as the cutie who gets slimed by the blob while dozing in a car. Director Chuck Russell keeps the proceedings moving at an appreciable clip, though the script he co-wrote with Frank Darabont often revels in its mean-spiritedness.

Blu-ray extras consist of audio commentary by Russell and horror expert Ryan Turek; a Q&A with Russell; the theatrical trailer; and an isolated track of Michael Hoenig's score. 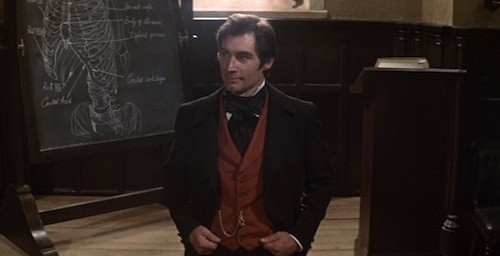 THE DOCTOR AND THE DEVILS (1985). Mel Brooks may be known foremost as a brilliant comedian, but through his Brooksfilms company, he nurtured such acclaimed dramas as The Elephant Man, The Fly and 84 Charing Cross Road. Although directed by the estimable Freddie Francis and based on a screenplay Dylan Thomas wrote back in the 1940s, The Doctor and the Devils was deemed a misfire, although it deserves a fresh look today. Timothy Dalton plays Dr. Rock, a 19th-century professor (clearly not the other Dr. Rock, the boozy DJ of the same name that Jim Belushi played in Salvador!) who employs a pair of grave robbers (Jonathan Pryce and Stephen Rea) to supply him with fresh cadavers for his medical research. A fictionalized take on the real-life grave-digging ghouls Burke and Hare, this benefits from the script's moral musings and a suitably grungy atmosphere. 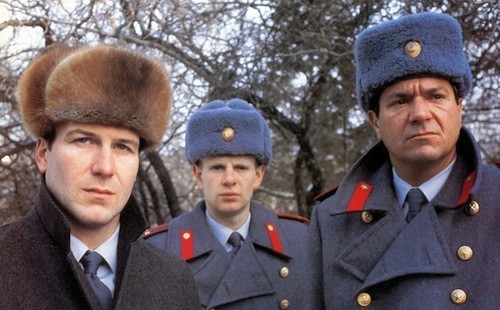 GORKY PARK (1983). Martin Cruz Smith's smash best seller gets turned into a satisfying movie featuring a stellar cast and a script by The Singing Detective scribe Dennis Potter. William Hurt plays Arkady Renko, a diligent Moscow detective determined to find out who's responsible for the three unidentifiable corpses found in the city's Gorky Park. The Cold War intrigue works better than the murder-mystery angle, which isn't too difficult to figure out. Lee Marvin and Brian Dennehy co-star as Americans who may or may not be involved with the slayings, and that's the Star Wars franchise's Emperor/Chancellor Palpatine, Ian McDiarmid, as the university professor who helps Renko identify the bodies through unique means.

Blu-ray extras consist of an interview with Apted and the theatrical trailer.

View from the Couch film View From The Couch Matt Brunson Desperately Seeking Susan Into the Storm Sin City: A Dame to Kill For UHF Under Fire The Blob The Doctor and the Devils Gorky Park Blu-ray