When Deniro Farrar, local rapper and founder of the Cult Rap movement, walked into Common Market in Plaza Midwood on a recent Wednesday afternoon, there was something different about him that I couldn't place at first.

I had just seen him two weeks before at a Player Made party at Snug Harbor down the street, but something had changed in that short time. It only took a matter of seconds to realize what it was, but it's surprising that it even took me that long.

Farrar's most recognizable feature, his shoulder-length dreadlocks, were chopped down to a few inches each.

When I asked him about it, he laughed and said he had been growing his dreads for four years. 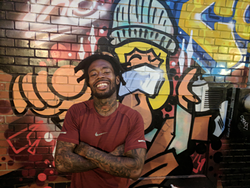 "Throughout that four-year journey, for real, I've been through so much shit, dog, so many ups and downs, you know what I'm saying, and I feel like hair really do carry energy," he said. "I was like, 'Man, you know what, I'mma cut it.' I just did it one night."

It was important for Farrar to keep the "stumps," the foundation of each dreadlock like a tree that will grow back, he said. And considering his earlier statement about the energy that's been stored in those iconic 'locks over the last four years, he's right to want to keep that foundation, because it's been a hell of a ride for the Charlotte native.

In that time, Deniro — whose real name is Dante Qushawn Farrar — has seen his name continue to blow up internationally. He's played huge venues across the country and toured the world, stopping in Dubai and China, all while continuing to put out high-quality music partnered with equally exceptional visuals.

On Sept. 22, Farrar will appear at The Black Mecca festival at Camp North End before catching a flight and embarking on another cross-country tour, hitting Las Vegas, Boston and other spots in between.

But Farrar's journey didn't begin when he started growing his dreads. In fact, it began on an unsuspecting night at the club.

According to Farrar, now 31 years old, he wasn't even rapping regularly when a man heard him spitting a freestyle in front of a Charlotte nightclub on 2010. That man, David Luddy, was the owner of the locally owned Black Flag Records. Luddy offered his card and suggested Farrar call him if wanted to record in a studio.

Up to that time, Farrar had never written a rap before, so he had no interest in studio time.

Then in his early 20s, Farrar was selling weed and had already caught two felonies, which made it hard for him to get a job. He eventually began working with his uncle on a street-sweeper truck, but quit before the year was up.

A 9-to-5 wasn't for him, so Farrar decided to quit the job that same year and give Luddy a call, just "on some bored shit," he said.

"[Luddy] had a studio, he tried to put me in the booth to rap and I was like, 'I ain't a rapper. You just heard me kinda rapping, just saying some shit, but I ain't a rapper. I ain't got nothin' to say,'" Farrar said.

But Luddy told him to go home and write a rap, then bring it back and they could give it one more try. Farrar did just that, and came back with a verse. The recording became one of 31 tracks on Farrar's debut mixtape, Feel This, which dropped in November 2010.

It turned out he had plenty to say.

"I was just goin', I was a workhorse already, you know. And [Luddy] was a workhorse, so he was just basically exercising that workhorse in me and showing me I already have the ability to grind and grind and grind, and he just wanted me to put my creativity out in its totality," he said. "Like, 'Yo, we ain't cutting shit. We're putting everything out because everything is experimental, you don't know what's going to stick.'"

And it stuck. Farrar's raspy voice and head-bobbing flow was the prime delivery vehicle for his raps, which struck a back-and-forth balance between criminal and conscious.

Farrar credits astrology with the personality traits that have bled into his music. He said it's just his Gemini ways. It's also a callback to his favorite rapper, Tupac.

"That's what made me unique. That's what gave me my lane and style, just merging those two, because I am conscious, but I do have a lot of street ways," Farrar said. "Merging those two was a perfect match for me. It's like Sour Patch Kids, sweet and sour, but it's the combination of the two, the salted caramel brownie, they just work well together."

Farrar kept up the workhorse mentality, following Feel This with three releases in 2012. But it wasn't just the mixtapes that were helping Farrar build his name. Luddy and Farrar's manager, Konstantin, had Farrar in front of huge crowds from the get-go. He was touring with Wiz Khalifa already when Feel This dropped, and would open for acts like Nas and Damien Marley, Mike Posner, Wale and Public Enemy during his first two years.

As the hype around Farrar built, he tried to keep his head down and keep working, but that's always going to be hard for someone thrown into such a situation so quickly. In a 2012 profile of Farrar in Creative Loafing, Farrar admitted to becoming arrogrant, pointing to a tweet from May 2011 in which Farrar let it fly: "Listen up you fuckers, that's not rain that's me pissing from my private jet in the sky."

It would be in 2013 that Farrar would truly grow up, thanks to two events that would shape his life forever.

First, Farrar's younger brother, Anthonio "Tune" Farrar, was arrested for the murder of 19-year-old Benjamin McDaniel. Two years later, he'd be convicted and sentenced to 18-23 years in prison, only to win his appeal and be released in 2017.

"There was nothing I could do," Deniro said. "I didn't have the financial stability to be able to fight the case the way that I know it deserved to be fought. But then the Most High always got the last say so."

Another factor in Farrar's maturing that year was the birth of his first children, two sons born four months apart. 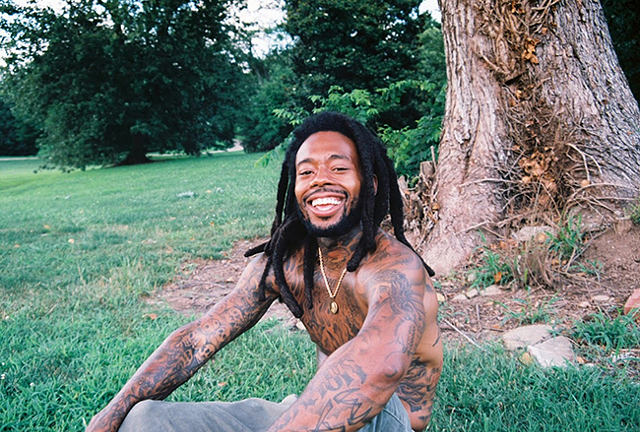 Eventually, fatherhood wasn't the only pressure that Farrar felt. Farrar founded Cult Rap, a label and movement he named after his long-time interest in cult leaders like Charles Manson and Jim Jones and the sway they had over people.

As his star grew, more folks began to take notice, both at home and away. Over the last four years, as Farrar has been touring the world, the hip-hop scene in Charlotte has been growing like his dreadlocks.

While he opened up locally for many LiveNation acts, he admitted that he "kind of skipped over that," when I asked him about playing local shows during his come-up.

He said he was too busy on his grind to even be aware of any scene in the city.

"I really felt like I was the only rapper rapping at the time, which wasn't the truth, but I could only see what I was doing because I was so focused on what I had going on," Farrar said. "I couldn't see what was happening around me. I was not in tune with the heartbeat of the music, the pulse of the music, my ear wasn't to the street. Some people wouldn't necessarily classify that as a good thing, but I didn't think it was a negative. I was just immersed in what I was doing. I didn't have time to pay attention to what anybody else was doing."

However, as a current Charlotte resident who splits his non-touring time between his hometown and New York City, he's proud of what's been happening in the scene lately.

"There was not a lot of things taking place [in 2011] that I'm starting to see unfold now," Farrar said. "As my career began to flourish I started to see the city of Charlotte become more open to hip-hop and doors start to open. I won't say it was all because of me, but I know I played a part in that, opening up a lot of those doors. It was a blessing just to see."

In August 2017, Farrar held a Tribe concert at The Rabbit Hole in Plaza Midwood. He told organizers that he wanted to put together the line-up, then recruited some of Charlotte's best black talent: Nige Hood, Yung Citizen, Dexter Jordan, Blu House and more. The show was a shoo-in for Best Local Concert Critic's Pick in CL's 2017 Best of Charlotte issue.

Farrar said the Tribe show was something he'd like to do more of moving forward, as well as philanthropic efforts for Queen City youth.

He said he once felt he was the only rapper folks in Charlotte were talking about, but that's now changed, and he's all the better for it.

"I was the talk of Charlotte and I hated that in a sense. I enjoyed it because of the hard work that I put in, but I hated it because I'm like, 'Man there's so much other talent here in the city. I'm not the only one,'" Farrar said. "And now I'm really not the only one, because you got Da Baby, you got Lute, you got Elevator [Jay], you have Nige Hood. I mean, man, there's so many people to name, and it's dope because the culture is growing.

"I feel like I'm one of those OG faces at this point now," he continued, laughing. "I'm just like that dude that come in the party and people are like, 'Oh shit, Deniro, what's good?' I just fall back on some, 'Yeah,' shit."

Although having seen Farrar on stage many times, odds are that we'll all see more than just some "Yeah" shit at The Black Mecca.