DEEP RISING (1998). A major box office bomb that has since developed a small if devoted following, Deep Rising is yet another Alien-style horror yarn that offers little in the way of originality or innovation. Even its nautical slant was too little, too late – the end of the previous decade has seen a rash of similar titles like Leviathan and DeepStar Six — and its plotting is strictly by-the-numbers. Still, ya gotta give a sliver of credit to any movie that would include the term “Half-Digested Billy” in its closing credits. Treat Williams stars as a wisecracking skipper-for-hire who’s just one of many people stranded on a cruise ship that’s under siege by sea monsters with an appetite for humans. (“They drink you alive,” helpfully explains one of those fighting for survival. “They suck all the fluids out of your body before excreting the skeletal remains.”) Also on hand are a wisecracking passenger (Famke Janssen), a wisecracking mechanic (perpetually irksome Kevin J. O’Connor), and a criminal mastermind (Wes Studi) who doesn’t particularly care for wisecracks. FX wiz Rob Bottin (The Howling, The Thing) remains one of the best in the biz, but the monsters he created for this picture are just a CGI blur of teeth and tentacles — equally disappointing is an underwhelming climax involving a jet ski. Reliable Jerry Goldsmith provides a solid score, and look for such fine actors as Djimon Hounsou and Cliff Curtis cast as villainous underlings.

Blu-ray extras include audio commentary by director Stephen Sommers and editor Bob Ducsay; interviews with Studi, O’Connor and co-star Anthony Heald (suitably oily as the luxury ship’s duplicitous creator); a pair of pieces on the visual effects; a still gallery; and the theatrical trailer. 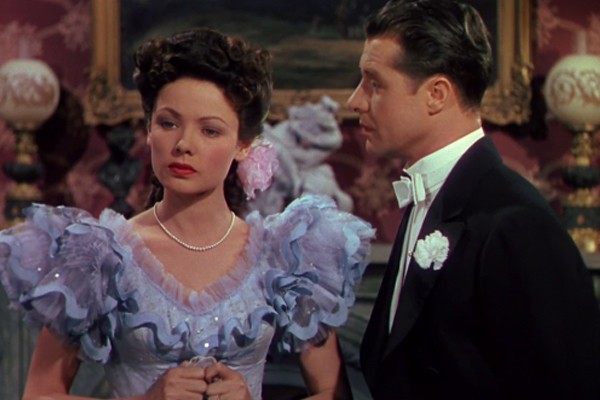 HEAVEN CAN WAIT (1943). Not related in any way to Warren Beatty's popular 1978 fantasy of the same name (itself a remake of 1941's Here Comes Mr. Jordan), this Heaven Can Wait is director Ernst Lubitsch's haunting study of a man so convinced he belongs in Hell that he doesn't even apply for admission at the Pearly Gates. Relating his life story to a clearly amused Satan (Laird Cregar, the memorable though tragically short-lived star of The Lodger and Hangover Square, the latter reviewed here), lifelong slacker Henry Van Cleve (Don Ameche) offers specific details on how he's spent an entire lifetime romancing women, even when it put his marriage to a perfect wife (Gene Tierney) at risk. What begins as a sprightly comedy eventually turns into an affecting look at loneliness, ageism and mortality. One of Lubitsch's biggest commercial successes, this earned Academy Award nominations for Best Picture, Best Director and Best Color Cinematography; however, the memorable sets by James Basevi and Leland Fuller, most notably the urbane depiction of Hell's waiting room, somehow failed to snag a nod. (The wonderful Charles Coburn, who appears as Ameche's wisecracking grandfather, nabbed the year's Best Supporting Actor Oscar for an even better performance in The More the Merrier.)

Blu-ray extras consist of a video conversation (from 2005) about the film between critics Andrew Sarris and Molly Haskell; a 1982 episode of Creativity with Bill Moyers that looks at the life and career of the film's screenwriter, Samson Raphaelson; a 1977 audio seminar with Raphaelson and film critic Richard Corliss; home recordings of Lubitsch playing the piano; and the theatrical trailer.

NEVER SO FEW (1959) / HOME FROM THE HILL (1960). McQueen, Mitchum, and other macho men are at the forefront of two vintage titles from the Warner Archive Collection.

John Sturges was a dependable director of robust action yarns, but the World War II effort Never So Few finds him largely defeated by a scattershot script. Frank Sinatra (sporting an unfortunate goatee in the film’s opening scenes) stars as Captain Tom Reynolds, who’s leading an OSS squad into combat against the Japanese in war-torn Burma — that is, when he’s not busy wooing an Italian beauty (Gina Lollobrigida) whenever he’s on leave (which is often). The love story is commonplace and hampered by a noticeable lack of chemistry between Sinatra and Lollobrigida — the war material is similarly humdrum until a late-inning development that finds Reynolds and his team squaring off against Chinese warlords and subsequently battling U.S. bureaucrats wary of an international incident. Richard Johnson is excellent as Reynolds’ best friend, Steve McQueen (just breaking out) steals scenes as a brash soldier, and an unbilled, pre-Sulu George Takei appears briefly as a hospital patient. Sturges would again use McQueen and Charles Bronson (on hand as a temperamental soldier) in his subsequent classics The Magnificent Seven and The Great Escape.

Home from the Hill, meanwhile, is a rich family drama anchored by Robert Mitchum’s fine performance and further distinguished by superlative support, by George (two of them, actually). George Peppard and George Hamilton play the sons of Mitchum’s Wade Hunnicutt, a Texas tycoon known for his womanizing ways. Theron Hunnicutt (Hamilton) is the legal son he sired with his wife Hannah (Eleanor Parker) while Rafe Copley (Peppard) is the bastard offspring from one of his dalliances. Both Theron and Rafe are decent men, but while Rafe is comfortable with his rugged individualism, Theron is tired of his mama’s boy status and seeks to break free. Vincente Minnelli has directed so many classics that this picture often gets overlooked, yet that shouldn’t be the case. Working with the Hud / Norma Rae screenwriting team of Harriet Frank Jr. and Irving Ravetch (adapting William Humphrey’s novel), Minnelli has fashioned a compelling enterprise that offers a double-barreled spin on the familiar “sins of the father” narrative.

The only extra on both Blu-rays is the theatrical trailer.

THE TINGLER (1959) / STRAIT-JACKET (1964). While the major studios apparently can’t be bothered to release William Castle films on Blu-ray, they are allowing specialty outfits like Shout! Factory and Olive Films to make them available to eager audiences. Here are two more to add to the roster, both courtesy of Shout!

Perhaps Castle's most outrageous film, The Tingler also stands as one of his best. Vincent Price stars as a scientist who discovers that fear manifests itself as a physical creature that attaches itself to the frightened person's spinal cord, and that the only way to get rid of it is through screaming. Credit this picture for originality, but also give it props for smartly playing around with the conventions of cinema itself, as witnessed via one segment in which the blood in this otherwise black-and-white feature is presented in color, or in the climactic sequence in which "The Tingler" terrorizes a packed movie theater. Ever the consummate showman, Castle was known as much for his promotional gimmicks as for the movies themselves — for The Tingler, he had select theater seats wired to provide viewers with an electric jolt at crucial moments in the film.

After hitting a rough stretch that found him directing in rapid succession the daft Zotz!, that lamentable remake of The Old Dark House, and the truly awful 13 Frightened Girls, Castle regained much of his former luster by helming Strait-Jacket, in which a woman (Joan Crawford) hacks up her husband (yes, that's an unbilled Lee Majors) and his girlfriend with an axe in front of her young child. Twenty years later, Mom is released from the insane asylum and goes to live with her now-grown daughter (Diane Baker), but has she really been cured of her violent impulses? The twist ending is one of the most obvious ever put on film (the script is by Robert Bloch, who wrote the novel on which Psycho was based), but Crawford's campy histrionics and some neat stylistic flourishes make this worthy entertainment.

Blu-ray extras on The Tingler include audio commentary by film historian Steve Haberman; interviews with co-star Pamela Lincoln and publicist Barry Lorie; a vintage featurette; and a promotional recording made for theater lobbies back in 1959. Blu-ray extras on Strait-Jacket include audio commentary by film historians Steve Haberman and David J. Schow; interviews with actress Anne Helm (who was fired from the film thanks to the typically shrewish Crawford) and publicist Richard Kahn; a making-of featurette; and screen test footage of Joan wielding an axe.

WILD AT HEART (1990). Winner of the Palme d'Or at Cannes, Wild at Heart was writer-director David Lynch's first feature since his 1986 cause célèbre Blue Velvet. As such, the film arrived on the scene with much fanfare, even though it eventually ended up nabbing decidedly mixed reviews (even at Cannes, its victory was greeted with both cheers and jeers). I enjoyed it more back in 1990, though I'd be hard-pressed to recall exactly why — viewing it now, it's only a marginally satisfying experience, with some potent set-pieces diluted by an almost juvenile predilection on Lynch's part to try to shock the audience with gruesome shots or downright baffling ideas. Nicolas Cage and Laura Dern play Sailor and Lula, lovers on the run from Lula's insane mother Marietta (Diane Ladd, Dern's real-life mom). Wanting Sailor dead and Lula brought back to her, Marietta will stop at nothing to achieve her goal; as for the young couple, they meet an odd assortment of characters on the road, none of them more dangerous than the perpetually grinning Bobby Peru (a funny-scary Willem Dafoe). Wild at Heart is a grab bag of vignettes, several of which pay direct homage to The Wizard of Oz while many more serve little purpose except to indulge the auteur's idiosyncrasies (one flashback, for instance, finds Crispin Glover as a nut who likes to stuff cockroaches in his underwear). Cutting through the perversions are Cage and Dern, completely credible as the crazy-in-love couple. Incidentally, Ladd took to personally calling Academy members (and even inviting some over for dinner!), which explains how her hammy performance managed to snag a Best Supporting Actress Oscar nomination.

Blu-ray extras include a retrospective making-of featurette; an interview with author Barry Gilford (who wrote the source novel); deleted and extended scenes; and the theatrical trailer. 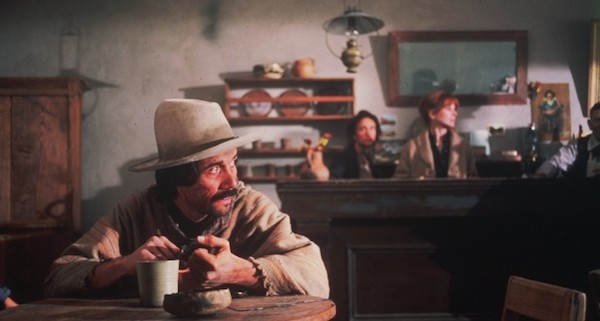 THE BALLAD OF GREGORIO CORTEZ (1982). A PBS production that nevertheless managed to eke out a brief theatrical run, this is a textured drama based on the true-life tale of a Mexican-American farmer (Edward James Olmos) who killed a sheriff in self-defense and then found himself on the run from various lawmen as well as posses out for blood. Director and co-scripter Robert M. Young packs his picture with seasoned character actors who add grit rather than glamour (Brion James, Bruce McGill, James Gammon, William Sanderson), and in the current climate sparked by the white supremacist in the White House, its story of wrongly persecuted Mexicans rings especially true.

THE UNBORN (1991). This lamentable horror yarn, both tedious and turgid, stars Invasion of the Body Snatchers’ Brooke Adams as Virginia Marshall, a wanna-be mom who suffers through a series of miscarriages before she and her husband (Jeff Hayenga) learn of a doctor (James Karen) who offers a radical IVF program. Virginia becomes pregnant, but it’s not long before she suspects that the doc is insane and that she’s carrying some sort of monster. Swiping from both the classy Rosemary’s Baby and the cheesy It’s Alive, this often risible flick is merely stillborn. Look for early screen appearances by Lisa Kudrow as the doctor’s receptionist and Kathy Griffin as a lesbian whose partner (Wendy Kamenoff) is carrying one of the mutant babies.

Blu-ray extras consist of audio commentary by director-producer Rodman Flender and Adam Simon (who appears briefly as a priest), and the theatrical trailer.