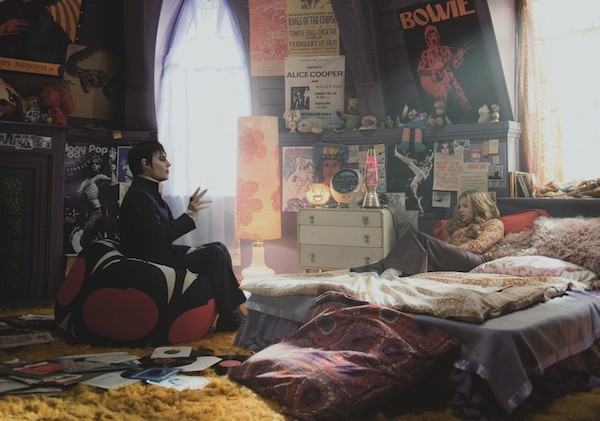 My mother — God rest her soul — liked her celebrities sexy and larger than life: Tyrone Power, Burt Reynolds, Bobby Kennedy (this despite her being a lifelong Republican), Tom Jones and, above everyone else, blonde, blue-eyed, beautiful Robert Redford. And yet my early childhood memories insist that the only poster she personally hung in our house, which was otherwise tastefully decorated with landscape paintings and family portraits, was of Barnabas Collins, the vampire portrayed by Jonathan Frid in the popular TV soap opera Dark Shadows (1966-1971). The poster resided on the inside of a clothes-closet door, an appropriate place for a creature who embraced darkness and shunned the light.

Frid (who passed away last month) wasn't a particularly handsome actor — and my mom certainly wasn't a soap opera fan (besides, the show didn't air in Argentina, which is where we lived at the time) — but such is the seductive allure of suave, well-spoken vampires that they tend to break down resistance across all lines. Some people swoon over Christopher Lee's Dracula; others respond to Robert Pattinson's Edward Cullen; for Mom, it was apparently — perhaps inexplicably — Jonathan Frid's Barnabas Collins.

It's hard to imagine anybody save maybe the most extreme Johnny Depp groupies going all aflutter over the new Barnabas Collins in Tim Burton's big-screen Dark Shadows. How is it possible that a man who just a few years ago stood as one of our most exciting and unconventional actors has now become one of the most predictable? It brings to mind Marlon Brando, who followed a decade's worth of terrific performances with increasingly eccentric characterizations that barely tested his abilities but certainly tested the patience of audience members. Depp worked with Brando on a couple of projects (Don Juan DeMarco and The Brave), so maybe some of that eccentricity rubbed off on Depp and has been quietly cultivating itself for the past decade-and-a-half. How else to explain a career path that has largely become a parody of itself? Depp's terrific, Oscar-nominated turn as swishy pirate Jack Sparrow in the first Pirates of the Caribbean film was a godsend, but because the actor has since largely restricted himself to roles that require him to pack on the pancake makeup while engaging in various modes of Sparrow Lite, it's no wonder many moviegoers aren't exactly breathless over the prospect of his Tonto in the upcoming Lone Ranger film or yet another return to the high seas for a fifth Pirates flick.

Dark Shadows is too often more of the same. A fairly faithful take on the vintage show, the movie features the best production values a studio's money — and Burton's vision — can buy. This is no surprise: Rick Heinrichs won his Oscar for his brilliant set design on Burton's Sleepy Hollow, while Colleen Atwood won one of hers for her elaborate costumes for Burton's Alice in Wonderland (and received additional nods for his Sweeney Todd and Sleepy Hollow). Heinrichs and Atwood are also employed here, and both might be adding to their cabinets of industry accolades. But it used to be that a Tim Burton production offered much more than surface pleasures.

The 18th century period setting provides for the whirlwind prologue — the spurned witch Angelique (Eva Green) kills Barnabas' true love Josette (Bella Heathcote) and turns the brokenhearted gent into a vampire, leading him to be imprisoned in a coffin by angry villagers. The rest of the movie takes place in 1972, when Barnabas is unearthed and returns to the family estate, now in the hands of dysfunctional descendants: matriarch Elizabeth Collins Stoddard (Michelle Pfeiffer), her useless brother Roger (Jonny Lee Miller), her surly teenage daughter Carolyn (Chloë Grace Moretz), and Roger's meek son David (Gulliver McGrath). Other Collinwood Manor residents include psychiatrist Julia Hoffman (Helena Bonham Carter), groundskeeper Willie Loomis (Jackie Earle Haley), and David's new nanny Victoria Winters, who just happens to be the spitting image of Josette. The family business (seafood) has taken a precipitous hit with the emergence of overpowering competition, and Barnabas soon learns that this mysterious rival is Angelique, still causing problems for the Collins clan after all these centuries.

Penned by frequent Burton collaborator John August and Seth Grahame-Smith, the author of Pride and Prejudice and Zombies and Abraham Lincoln: Vampire Hunter, this screen version hums along nicely for a good while, as Barnabas' reactions to a radical new world provide some amusing moments. Most of the humor derives from the mere juxtaposition of the character's old-school speech in this 1970s setting: "Fear me not, drunkard," he barks to the inebriated Willie Loomis, while later he comments to Carolyn, "Fifteen, and no husband? You must put those childbearing hips to good use." But after a while, the fish-out-of-water gags grow old, and they're replaced with something even more damaging: a plotline that takes itself too seriously. There are still bright moments here and there, and Green is good as the seductive sorceress, but the film becomes increasingly more diffuse, and it ends with a dreary FX blowout that shares nothing in common with the modest source material.

Dark Shadows marks the eighth collaboration between Burton and Depp, and it's quite possible that — to borrow the name of another long-ago TV show — eight is enough.