Dammit Wesley Gets the Conversation Rolling

Talk about the passion 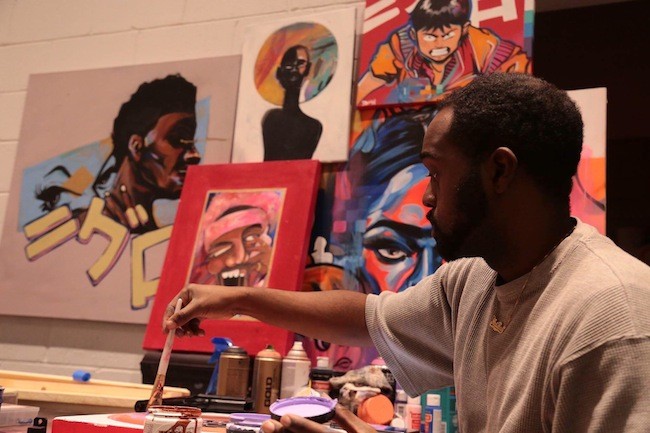 "The arts have always been a very powerful weapon," Jimi Thompson says, "especially for people of color." Thompson is better known as Dammit Wesley, the 31-year-old painter, innovator and part-owner of the BlkMrktCLT art gallery and photography studio at Camp North End, which celebrates its one-year anniversary on Friday, July 27.

Thompson is seldom at a loss for words about the state of the arts or the African-American community in Charlotte. For instance, in the past five minutes, the conversation has ranged from the ethnicity of Jesus Christ — Thompson points out the Messiah was most likely black — to the importance of arts literacy for people of color. He maintains that a legacy of visual arts is necessary to knit together African-American culture and give it an identity. As Thompson sees it, the city is not plagued by a glut of starving artists; instead, we are drowning in a sea of starved consumers.

"There are people out there who want more than what they're getting," Thompson maintains. "They don't believe Charlotte has a bubbling creative culture. There's nothing encouraging them to experience and experiment and try to put things right."

By both design and organic evolution, Thompson's career has been a response and counterweight to the problems he identifies. When he saw a shortage of arts shows for and by people of color, he teamed up with DJ Fannie Mae for "Dammit Fannie," a series of monthly showcases. When Thompson decided to move the showcases to a permanent space, he co-founded BlkMrktCLT with photographer Will Jenkins.

Similarly, when Thompson felt media coverage of the arts had become stagnant, with artists answering the same tired old marketing and resume questions, he launched and co-hosted the podcast "Let's Talk Dammit" with his sister, Jessica Thompson. After the podcast had run its course, Thompson transferred its anything-goes-attitude to a monthly open forum, also called "Let's Talk Dammit," where Charlotte artists of color can discuss and share information about their craft and their business.

As befitting an outspoken artist and defacto community leader, Thompson's arts background and training are also unconventional. He started in the arts not by choice but by circumstance.

"When I was five years old and in kindergarten I had a serious stutter," Thompson says. "So visual communication became a necessary survival skill."

At an early age, the native of Greenville, South Carolina, realized that visual arts is a distinct language. That lesson came in handy when he auditioned for — and won — a spot at Greenville's prestigious Fine Arts Center, where from third grade to his high school graduation Thompson received a college-level education in multiple fine arts disciplines, including painting, drawing, ceramics, theater and music. He went on to study graphic design at Winthrop University, where his outspokenness and youthful bravado caused him to butt heads with some of his professors.

"I was running into a lot of personal and political issues [in the classroom], and that steered me out of the commercial arts area," Thompson says. In his early 20s, he was making art while trying to make ends meet. He didn't have money to buy canvasses, so he painted on the back of pizza boxes. Thompson says he was creating just to create. In the same way that some people deal with problems by stress-eating, he would stress paint — a practice Thompson continues to this day. Eventually, an arts encounter changed the course of Thompson's career, and he says he owes it to an ad he saw in Creative Loafing for "Art, Beats & Lyrics," a traveling hip-hop and arts showcase.

"I was 21 years old and it was the first time in my entire life that I was seeing an exhibition with all-black artists," Thompson says. "All the people at the event looked like me. And the band was playing covers of old Def Jam records."

The show was a revelation, and Thompson realized he didn't have to be beholden to white Eurocentric arts and aesthetics to make meaningful work. He could actually create things for people like himself.

"A lot of times people don't embark on their journey, and they don't act on their dreams simply because they haven't seen anybody like them do it," Thompson says. So, Thompson determined to bring the inspiration that fired his imagination to others. In 2013 he started doing live painting at events around Charlotte, where he kept running into DJ Fannie Mae.

"Eventually, we linked up to make something happen, and everything fell into place after that," Thompson remembers. 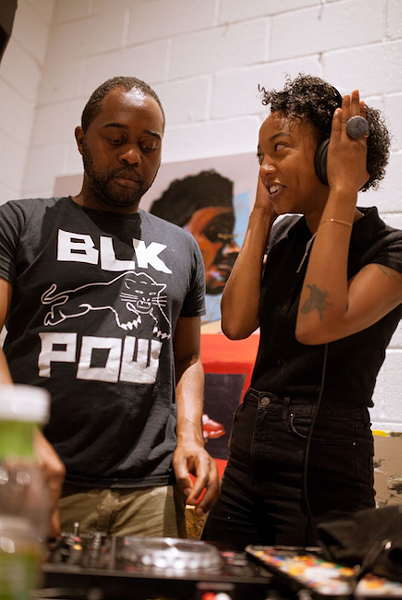 For the next three years, the pair mounted monthly "Dammit Fannie" showcases at venues like Dupp&Swatt and Studio 1212, where Thompson curated the live painters and all the visual art. Monthly arts showcases continue in the duo's permanent BlkMrktCLT home at Camp North End, which serves as a photography studio for Will Jenkins, but also quickly became a venue where creativity is encouraged.

BlkMrktCLT is a space where creatives of color can be free, be themselves and make art in peace without any need to filter themselves, Thompson says. He sees his niche as delivering resources, equipment and a venue for artists and event planners that enter the space. The site has played host to baby showers, weddings, solo shows, exhibitions, classes and music videos. "We've done it all and we're trying to do more," he says.

Concurrent with the evolution of BlkMrktCLT, Thompson was looking for a way to revive the open lines of communication he celebrated with his podcast. "After our podcast got shut down for too much explicit language and some other things, we got the studio at Camp North End," he explains. During one of the Camp North End photo walks, he noticed a age divide between photographers. With veteran photographers on one side and newbies on the other, there seemed to be little crossover, Thompson says. Money issues seemed to be fueling the fracture. Veterans wouldn't leave the house for less than $200 an hour, while people just beginning to learn the business and craft were charging $50 for a full hour shoot — a problematic, money-losing situation. 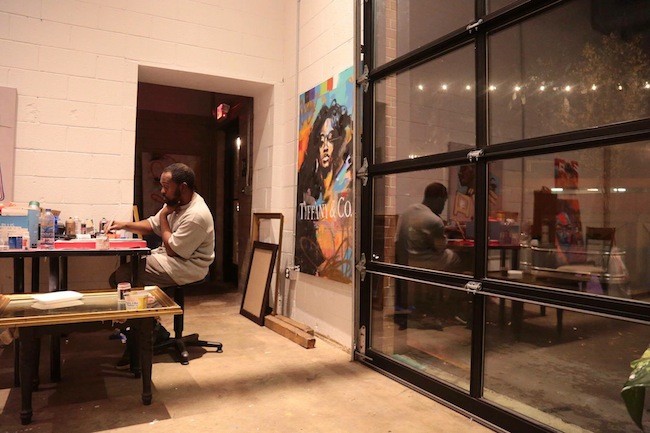 "Instead of me sitting in the middle listening to both sides complaining about it, I said, "Let's talk,'" Thompson remembers. And that's how "Let's Talk Dammit" was revived, not as a podcast, but as an open-discussion forum. Thompson was hoping a handful of people would show up for the inaugural monthly forum; instead, it seemed as if the entire city had turned out.

"It became obvious that creatives of color operated in bubbles," Thompson says. "We didn't talk. We didn't know each other's rates or skill sets. We didn't even have each other's email addresses."

"Let's Talk Dammit" works to break down those barriers, not in a traditional networking sense, but through open discussion throughout the community. At an early meeting, artists in attendance came up with a list of demands by creative people for the city council and then-incoming Mayor Vi Lyles. Compiling the list was difficult, Thompson says, because people of color don't have an ideal relationship with their government. Most just want to be left alone and not displaced from their homes by the powers that be, he says.

The council's recent decision to invite the Republican National Convention to town in 2020 has fueled that disillusionment, Thompson says, but he prefers to see the RNC as an opportunity, a chance for artists to use their most potent skill set — the power to influence people. "There's a bit of a revolutionary in me that is almost happy that Charlotte invited the RNC," he says. "It forces us to make our voices heard."

Thompson says artists of color should use the time between now and 2020 to hone their presentation and thereby increase their influence. "It's time to strengthen our voices, so that when we get the opportunity to get our message across, it's crystal clear."