When I meet with Sherrill, who performs as Cuzo Key, outside of his Davidson home, he explains to me why his laid-back, conversational style doesn't fit in with many of his peers. 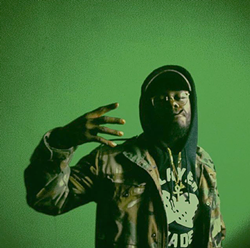 "I wouldn't even call myself a rapper, really. I just like to speak the truth. I just be wanting to give you some knowledge, give you some insight on whatever that subject is," he says as he rolls weed into a blunt wrap in his lap, unconcerned with the police officer who waves to him as he turns around across the street.

"I don't count bars, I count the beat ... and that's how I write my verses. I don't usually go bar after bar because that's not the type of person I am."

Recently, though, Sherrill found a rapper who could go bar for bar with him, even if it wasn't the same type of bars he was rapping. Sherrill linked up with Lavonte Hines, known locally as rapper and producer FLLS (pronounced like the word "fills"), and the two quickly realized that Sherrill's beat-riding style meshed well with Hines' straightforward flow. The two banged out a few songs, then a few more, and they eventually put together a collaborative project called Universal Player, the album release party for which will be at Snug Harbor on Oct. 16.

Before it's time to party, Sherrill chats us up about how he and FLLS built a rapport, and what comes next for him as a solo artist.

Creative Loafing: How did Universal Player come about?

Kenion Sherrill: We was just working. [FLLS] just made this one funky play beat. I did what I did on it, and that was "Getchu Some." When I did that, he was like, "I got a slew of beats just for you." He made another one, and then I got on top of that one, then he made another one, I got on top of that one. And then I wasn't finishing some of them. So he was like, "You know what, why don't I get on one of these?"

When he got on "Getchu Some," it was just a regular beat, but then he started adding samples, ad libs, he started putting breaks in it. We played it for some folks and they loved it. But it just wasn't, "Oh yeah, we like what we heard," it was more like it was something that they done heard before, that they prolly heard back in the day, and that's what it reminisces like.

So at that time we had four songs. Everything we're doing, the body of it is player, it's down South-ish, it's funky, I don't want to be cliché, but it's something different.

What was it that stuck out that made y'all decide to make a whole project out of it? 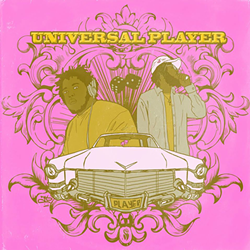 The diversity. He was into boom bap, I was into ridin' the beat. So, I felt like he made the beats so he can rap it lyrically, and I can rap it going on rhythm at the same time. He don't have to change the speed or switch the beat up, none of that. It can ride the same and I can do what I want and he can do what he want.

You said you had been previewing the work to people. Who was listening and encouraging that kept y'all going?

The circle that we got with Autumn [Rainwater] and Mariah [Scott] and Summer ["SideNote" Windham] and Callis [aka Jah-Monte], everybody in all those circles supported, and we also played it for them and we asked for their honest opinion, like, "If you don't like this, say it." I feel like you'll get a lot better if you hear a lot of honest "No" than a lot of lying "Yes."

So you have eight tracks right now together. How would you define this project? An album? A mixtape?

It's definitely not just a mixtape. I feel like it could have been just a mixtape if he just would have picked the beats that he had sitting around. But we actually sat down and made each one.

You haven't released a solo project since NIONEK in 2016. What have you been up to since then?

I'm working on NIONEK II, though. That's going to sound like more of me — more of everything that's done happened in the last two and a half years, since the last time I dropped NIONEK to now. It's not too much, not too all over the place, just really from then and until now, just another story.

What can we expect at this release party at Snug?

I think we are going to perform the whole thing. We've got Autumn on it, too. Spaceman Jones. We all run with each other, so most likely they'll show up for it. Callis gonna open it up for us, and then we just spit the whole thing. We gonna be tired, and it's gonna be worth it [laughs]. I'm really excited.