The siege of the 19th Annual Cucalorus Film Festival continues, with two more reviews from the front lines in Wilmington.

SHORT TERM 12 — Short Term 12 offers the most concrete proof yet that Brie Larson will be with us long-term. A former child actress who's lately been filling out small but memorable parts in such features as 21 Jump Street, Rampart and Don Jon (stealing, if not whole scenes, at least steady glances in a near-wordless role as Joseph Gordon-Levitt's sister), the 24-year-old talent here does a wonderful job playing the leading character of Grace, one of the staffers at a facility for at-risk kids. Like her boyfriend and fellow worker Mason (John Gallagher Jr.), Grace has dealt with the burden of once being a troubled foster teen herself, so she's well-equipped to handle these kids who largely come from homes where they've been physically beaten and/or sexually abused, be it by foster parents, stepparents or even biological parents. Grace cares about all the youth in her care, including a sullen teen named Marcus (Keith Stanfield), yet she takes a particular interest in new arrival Jayden (Kaitlyn Dever), whose sexual abuse at the hands of her father has left the girl angry, isolated and prone to emotional meltdowns. Writer-director Destin Cretton doesn't shy away from showing the results of the brutalities life has hurled at these poor children: Not only does he keep the camera uncomfortably close to Jayden as she kicks and spits and swears at the Short Term 12 workers who seek to help her, he also forces us (in a different scene) to be as confused as Grace in trying to determine who's leaking the blood that's streaking a bedroom door. Cretton joins these scenes of horror with scenes of heartbreak — particularly a superbly scripted bit in which Grace listens silently to Jayden's metaphorical tale about the friendship between an octopus and a shark — but above all, he offers plenty of scenes of hope, illustrating how these people, the at-risk kids and the young supervisors who understand their pain, function best when they can turn to each other for the love and support that's been denied them their entire lives.

HOW TO LOSE YOUR VIRGINITY — Despite its intriguing title, How to Lose Your Virginity isn't really a primer on how to get that cherry popped, any more than 1958's How to Make a Monster and 1965's How to Stuff a Wild Bikini were reference guides for their particular peculiarities. Instead, this relevant documentary from writer-director Therese Shechter employs that rhetorical statement as a springboard to allow all manner of people to weigh in on the subject. It's an enormous, unwieldy topic for one movie to address, yet the impressiveness on Shechter's part is how much varied material she does manage to pack into a running time that only slightly goes over the one-hour mark. One of the most frequent talking points, of course, is the whole madonna-whore dynamic, with our society looking favorably upon the Virgin Mary while frowning on poor Eve in the Garden (who, as noted, was only interested in accumulating knowledge while Adam preferred to sit like a lump). And as always, the grading curve for males is discussed, as participants comment on the misogynistic double standard that allows men to sleep with multiple women with no repercussions while the ladies must be careful not to engage in too much sex lest they be deemed sluts. None of this is new, but Shechter does a good job of rounding up folks who can present this material in appropriately infuriating context — none more so than Lena, a Harvard student whose punishment for candidly revealing her sexual activities on her blog was to be verbally abused by members of that special brand of sexist troll easily found polluting the entire Internet. Shechter also examines other disturbing developments when it comes to a woman's virginal status: For starters, Congress still will only shell out big bucks to schools that teach abstinence-only as opposed to comprehensive sex education (a tact about as useless as the War on Drugs), while the prevalence of purity balls, in which young girls pledge to allow Daddy to safeguard their virginity until a husband comes along to claim it, continues to hold steady. (The only flub on Shechter's part comes in showing the poster below as if it were for a real hotline; the url at the bottom of the one-sheet reveals it to be part of the promo campaign for the movie The Virginity Hit.) 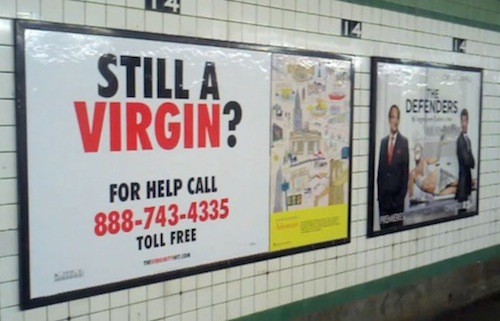 Yet don't think for a moment that this is an anti-virginity flick; on the contrary, Shechter showcases several folks who are happy with their non-"P-in-V" status, including Sarah, a 30-year-old comedian, and Brita and Daniel, an irresistibly cute couple who admit to having done almost everything except intercourse. Schechter's curiosity leads her to other interesting figures — some chaste, some not — such as Erica, the producer of the Barely Legal porn series, and Judy, a virgin who finds her job as a violinist on Lady Gaga's tour a good way to test her resolve. Schechter occasionally also turns the camera on herself, whether she's describing her own first time, trying on wedding dresses for her upcoming nuptials, or, to satisfy her curiosity (and ours), spending $30 to purchase a replacement hymen online. And what, you may ask, is a replacement hymen? Don't ask.

(The Cucalorus Film Festival runs through Nov. 17; go to www.cucalorus.org for complete details.)