Men cruising for men cause problems for neighbors, police and the outed gay community 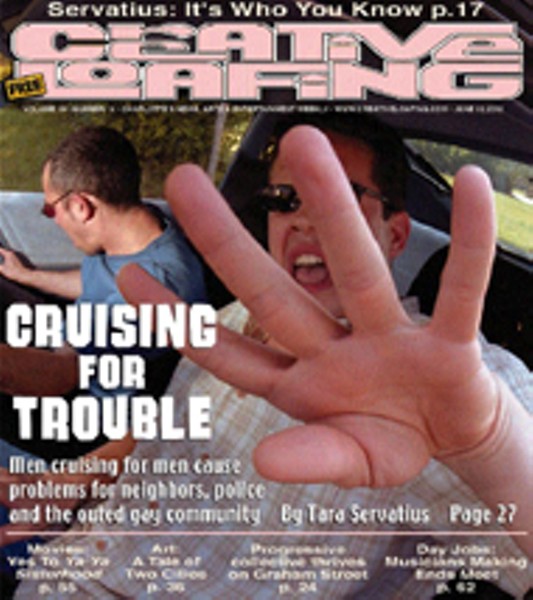 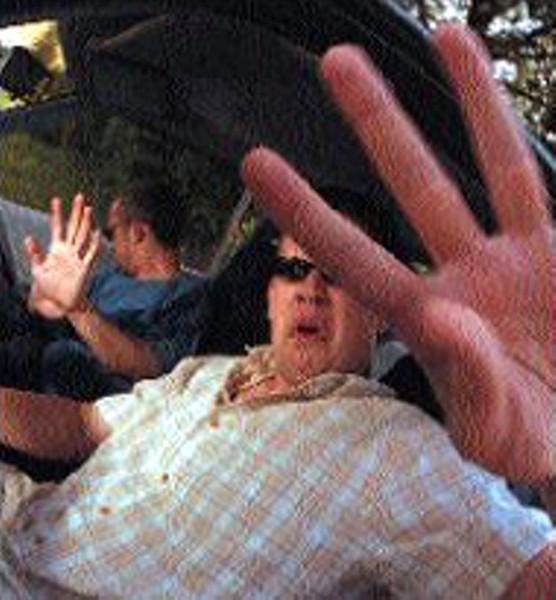 It was the pair of men's green bikini underwear that finally pushed Peggy Smith over the edge. She stepped on them when she got out of her car to take a walk along the trail at the airport overlook on Old Dowd Road last spring. They'd been casually tossed aside, likely after a tryst between two of the dozens of men who prowl the area daily, looking for sex with strangers.

"I was so pissed off," Smith said. But when she set out to do something about it, she couldn't find anyone willing to listen. Douglas International Airport Aviation Director Jerry Orr wouldn't return her phone calls and told her to call the airport police.

"The head of airport police said they have as much right as I do to be up there," said Smith. "I'll be damned if anyone has a right to subject me to stepping on a pair of their underwear. Now it's all queers up there all the time."

Smith says she now walks on the treadmill at home.

A woman named Jackie and her husband gave up their walks at the overlook trail after she saw a man wearing only a shirt standing by one of the cars in the parking lot. The couple was used to the condoms that sometimes littered parts of the trail, but outright nudity was too much. They stopped taking their kids up there as well, and found a new spot to exercise.

The official position of the airport police, who patrol the area, is that the overlook is a safe, family-oriented place to walk, picnic or watch the airplanes take off. But catch a cop or his friends off the record and you'll hear a different story. When one officer shined his light into a car he pulled over near the overlook, he discovered that the man inside was completely naked. The man told the officer that he was changing clothes. The officer pulled the man out of the car and made him put his clothes back on.

"We know it goes on," says another officer. "We patrol the overlook, but we don't sit there and watch it."

Tony Merritt, who likes to jog along the overlook trail, says he now understands what women go through when they walk by a construction site. He says men have heckled him on more than one occasion when he jogged by the overlook. The same thing has happened to Robert Davenport.

"I'd be jogging out there and they'd make passes from the overlook area to where the people park to walk," Davenport said. "They'll scream out their windows and make remarks like a man would to a woman, 'Woo, hey baby' and crap like that. Just enough to piss you off. It's definitely not a comfortable feeling."

But it's not that way for everyone. Unless you know what to look for, or happen to be mistaken for one of the regulars who park in the area, the subtle courtship rituals -- called "cruising" -- that take place at the overlook might escape your notice completely.

It works like this. At lunch and after work hours, cars driven by lone men pour into the parking lot of the overlook. Families and sightseers usually park right up against the fence at the front of the lot to watch the planes take off. Single men driving nondescript vehicles line the parking spaces near the back of the lot, leaving the spaces next to them vacant so other cars can pull in beside them. The middle of the lot serves as a kind of catwalk. Cruisers drive their cars into the lot and turn left, slowly parading past the line of parked cars in the back of the lot, checking out the men seated in them. Sometimes, if a cruiser wants a better look, he'll loop behind the other cruisers parked in the back of the lot and continually drive in a circle around the parked cars until he pulls in next to another car or moves on.

After circling a few times, if they don't see anything they like, men parked at the back of the lot often pull out and follow a predictable route that includes a small parking lot for pedestrians just outside the overlook and an adult bookstore called Highway 74 News and Video on the corner of Barry Drive and Wilkinson Boulevard.

The overlook is just one of dozens of hotspots around Charlotte where men meet surreptitiously for sex. Despite regular sting operations by Charlotte-Mecklenburg vice officers, parks like Kilbourne, Freedom and Park Road also attract a fair amount of traffic.

Cruisers don't seem out of place because they often look like they belong in these places. They're often older men who have none of the mannerisms of gay culture that homosexual men often adopt. They drive family type vehicles, because many of them are married. They don't go to gay bars because they're afraid someone they know might find out about it.