"It is a beautiful, romantic love story," says Pau Dones of Jarabe de Palo's 1996 break-out hit, "La Flaca." The true story recounts a trip to Cuba that leads to romance with a slight, dusky-skinned beauty — "a hundred pounds of skin and bone, forty kilos of salsa." Dones, a prolific songwriter, guitarist and vocalist, is the Spain-based alt-rock group's heart and soul and the song's narrator. He falls deeply in love, but must leave the island paradise, still longing for one more kiss from La Flaca. 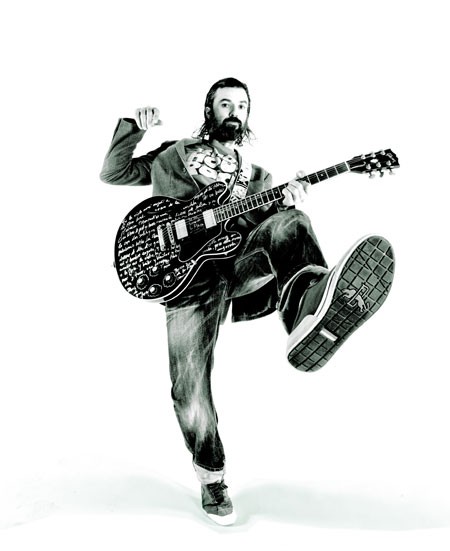 The song, and the story behind it, may be intensely personal to Dones, but, like many songs in Jarabe de Palo's joyous, heartfelt canon, its appeal is broadly universal. At the same time, the band's melodic mix of Caribbean, Latin, blues and classic rock retains an impish quality. Dones good-naturedly rattles cages and colors outside the lines, an inclination that's reflected in the band's name.

"Jarabe de Palo" is an idiomatic expression, meaning roughly "syrup of the stick." "It's when you are a kid and you don't eat your soup," Dones explains, "Your mama punishes you — a little bit." It's easy to imagine that Dones was the kind of kid who was told to "straighten up and fly right" more than once.

Dones is in Barcelona, packing for the airport, when he takes a break to answer questions about Jarabe de Palo's past and the band's upcoming tour, which includes the headlining spot on Charlotte's Latin American Festival at Symphony Park on Sunday, Oct. 14. "We fly into San Francisco," Dones mentions, "And then we have 24 dates, in America, Mexico and South America."

Crossing borders, both national and musical, is nothing new to the veteran band, which recently celebrated its 12th Latin Grammy nomination. Indeed, Dones' earliest influences were not Spanish-language artists, but Bob Marley and The Beatles. "Yes, I discovered the reggae of Bob Marley and the songs of The Beatles," Dones recalls. "But there have been many, many influences since. In the end, it's all music. We live in a world of ideas, so when you get a good idea, why not?"

For Jarabe de Palo, this cultural and musical sharing has led to rare and rewarding collaborations. On the band's sophomore album, Depende, the fledgling group boldly held its own with Spain's nuevo flamenco pioneers Ketama. On that album's stand-out track, "A Lo Loco," Dones shares vocals with the late, inimitable salsa legend Celia Cruz. "I knew of Celia because my mom was so fond of her music." Dones recounts how their musical collaboration became an abiding friendship. "I saw Celia whenever I went to New York. We became good friends. She was my American granny."

In recent years, Dones and his band's profile have risen beyond the borders of rock en español, so much so that artists are seeking to record with them, rather than the other way around. Case in point — The Pretenders' Chrissie Hynde. "Chrissie was in Italy where she saw our video for 'Bonito,'" Dones recalls, "She said, 'Who are these guys? I want to work with them.'" The result was the English language duet "Cry (If You Don't Mind)," the most prominent track on the band's album Un Metro Cuadrado 1m2, released in 2005. That LP signaled Jarabe de Palo's return to its rock roots, one of several shifts in the band's signature sound.

Dones prides himself on the band's consistent output, once telling the Spanish press, "People should be able to come to us just like a painting by Picasso or a movie by Almodovar, knowing beforehand what to expect." Jarabe de Palo's sound has been surprisingly fluid. The defiant-yet-danceable self-portrait of "Perro Apaleao" (a beaten dog) on the band's debut gave way in 2003 to the sunnier outlook of the Bonito LP.

For Dones, that album was a natural reaction to the negativity pervading all media during that period, a corrosive force that remains counterproductive to positive change. "You could read it in the newspapers," he says. "There was too much information and it was all wrong, all negative. But there are good things happening. I wanted to make songs that were happy, but serious."

Similarly, the band's recent return to the straight-ahead rock of its earliest efforts is a natural evolution. Rather than a strategic commercial shift, it's a case of Dones simply following his muse. Discussing the lack of Latin flavor on Jarabe's recent Y Ahora Que Hacemos LP, Dones points out, "No, it is not rock latina or rock mesquita. It is 'rock,' and this is what we do now. We want to make rock with a melody and a message."

Devotion to craft comes at a price. In 2008, Jarabe de Palo split with long-time label Warner Brothers to go independent. "At the moment, the industry is based on mainstream music. They wanted us to be more commercial," Dones says. "I say, 'OK, you are interested in your business, but I am interested in quality.' We have an image to maintain, and we have things to say."

Currently with Nacional Records and the band's own label, Tronco, Jarabe de Palo is touring in support of Orquesta Reciclando, a re-recording and re-imagining of 15 of the band's most famous songs. The rebooted versions benefit greatly from the band's current professionalism, more innovative instrumentation and new and surprising rhythms.

"The songs have grown and sound better than when they were composed," Dones says. "It is like wine. You open it, and it's good. But you wait 10 years, and then the wine is deeper, richer, bigger."