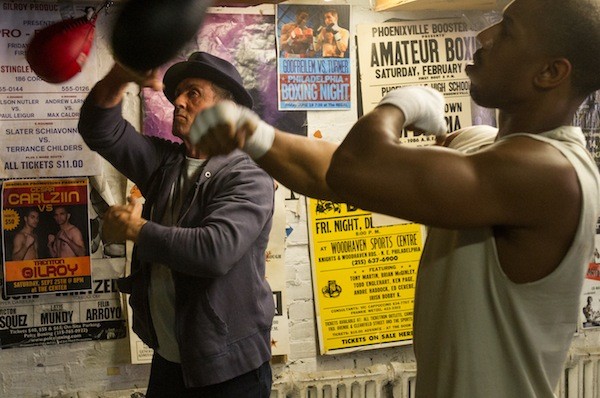 For a stretch of 30 years (1976-2006), Sylvester Stallone wrote the scripts for six Rocky films — if ever a series could have benefitted from fresh blood, it was this one. The franchise has been gifted to writer-director Ryan Coogler, but what's disappointing about Creed is how slavishly it follows the template of the previous pictures. It's as if Coogler, who made his startling feature debut with the powerful Fruitvale Station, was too afraid of messing with a sure thing, and the result is a movie that might as well have been written by Stallone himself. It's certainly not bad — it's the best entry since 1982's Rocky III — but aside from the character shift, there's nothing here that's especially original, and one's enjoyment depends entirely on how charitable one is feeling in the nostalgia department.

Michael B. Jordan is excellent as Adonis Johnson, the result of an adulterous tryst by the late Apollo Creed (played in earlier pictures by Carl Weathers). Now grown up, he returns to Philadelphia and asks Rocky Balboa (Stallone, of course), his father's nemesis-cum-friend, to take him under his wing.

Stallone is never better than when he's playing this role he nurtured from birth, and his relaxed and generous performance shows he has no problem moving from series star to supporting sage. But too many beats are far too familiar: There's even a Rocky-cribbed scene where Adonis is surrounded by fans and friends as he jogs down the Philly streets, and anyone who doesn't know exactly how the climactic fight will turn out clearly isn't paying attention.