The yawn that I stifled shortly past 8:30am during last week's live announcement of this year's Oscar nominations wasn't due to sleepiness. Instead, that involuntary emission was a result of the list of nominees being read by Mira Sorvino and Academy president Sid Ganis.

The nomination announcement can always be counted on for a few out-of-left-field surprises -- Edward Norton up for American History X? Yay! Paul Giamatti snubbed for Sideways? Booo! -- but this year resulted in zero surprises. None. Zip. Nada.

Well, OK, I didn't expect Memoirs of a Geisha to earn a Best Sound Editing nod to pit it against such digitally daunting endeavors as King Kong and War of the Worlds, and the lack of a Best Visual Effects slot for Star Wars: Episode III -- Revenge of the Sith is a real head-scratcher (it's the first Star Wars movie not to be nominated in this category). But in the major races, the field is largely what people predicted, and the few deviations from the expected shakeout (e.g. most prognosticators figured Walk the Line would slip into the Best Picture lineup over Munich) can hardly be considered earth-shaking. Even the directors branch, traditionally housing the most maverick of the voters, dutifully fell in line. The directors who in the past were brave enough to award solitary nods to such challenging fare as Blue Velvet, Short Cuts and The Last Temptation of Christ weren't edgy enough this year to honor A History of Violence's David Cronenberg, The Constant Gardener's Fernando Meirelles or Caché's Michael Haneke.

Still, there is a sizable silver lining here. Unlike the Grammys, the Oscars at least attempt to honor the best achievements in motion pictures rather than the most profitable (those Best Picture Oscars for Titanic and Gladiator notwithstanding), and that's never been more in evidence than this year. Among the five Best Picture nominees, the highest-grossing among the bunch is Brokeback Mountain with roughly $60 million at press time. That figure will probably climb to $100 million in the weeks ahead, but the other nominees, with grosses currently ranging from $16 million to $53 million, won't make it anywhere near that mark.

What's more, the five nominees are an educational bunch, the direct antithesis to the perpetual dumbing-down of America by shallow newscasts, reality TV shows and a goober president who couldn't spell Constitution if you spotted him every letter except the "c." Three of the nominees (Capote, Good Night, and Good Luck, Munich) are based on inflammatory events from the latter half of the 20th century, one (Crash) deals with race relations and the final title (Brokeback Mountain) focuses on homosexuality. History, blacks and gays -- clearly, these aren't topics that will find much traction with conservative factions constantly circling the wagons in an effort to keep the world out, but progressive film fans will appreciate the Academy's attempts to educate as well as entertain.

Here, then, are some more observations about this year's crop.

• The triumph of the independents. In the 1996 race, a lot of ink was spilled over the fact that the only Best Picture nominee from a major studio was Jerry Maguire. This year, the sole big-studio representative is the atypical Munich, which will be hard-pressed to gross even a third of what that Tom Cruise vehicle earned. In short, even with Miramax out of the picture, the independents continue to make their presence known during awards season. Focus Features, for my money the best studio currently on the scene, has been leading the charge as of late: Their titles among the past few years include Lost In Translation, The Pianist, Eternal Sunshine of the Spotless Mind, Far From Heaven and, from 2005, Brokeback Mountain, The Constant Gardener and Pride & Prejudice.

• The Best Original Score nominees. For decades, the old fogies who make up the music branch have been notorious for ignoring newcomers while embracing the same small circle of men year after year. And yes, this time around, they did predictably hand two of the slots to John Williams (for Munich and Memoirs of a Geisha), bringing his career total to 45. But astonishingly, the other three nominations went to musicians who are not only Oscar first-timers but international composers fairly new to English-language cinema: Argentina's Gustavo Santaolalla (Brokeback Mountain), Spain's Alberto Iglesias (The Constant Gardener) and Italy's Dario Marianellia (Pride & Prejudice).

• The Best Animated Feature nominees. Shark Tale, Brother Bear, Treasure Planet... These are just some of the acknowledged mediocrities that have managed to earn nominations in the past, placing the purpose of this fairly new category in question. But this year, all three nominees -- Howl's Moving Castle, Tim Burton's Corpse Bride and Wallace & Gromit: The Curse of the Were-Rabbit -- are fully deserving of their bids. And as someone who loathes the manner in which CGI has taken over the film industry, it's gratifying to point out that none of these films were created through computers (Howl was hand-drawn, while the other two employed stop-motion). 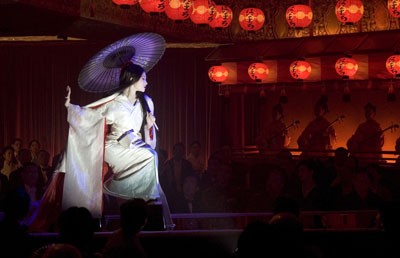