Being a supplier can have serious unintended consequences 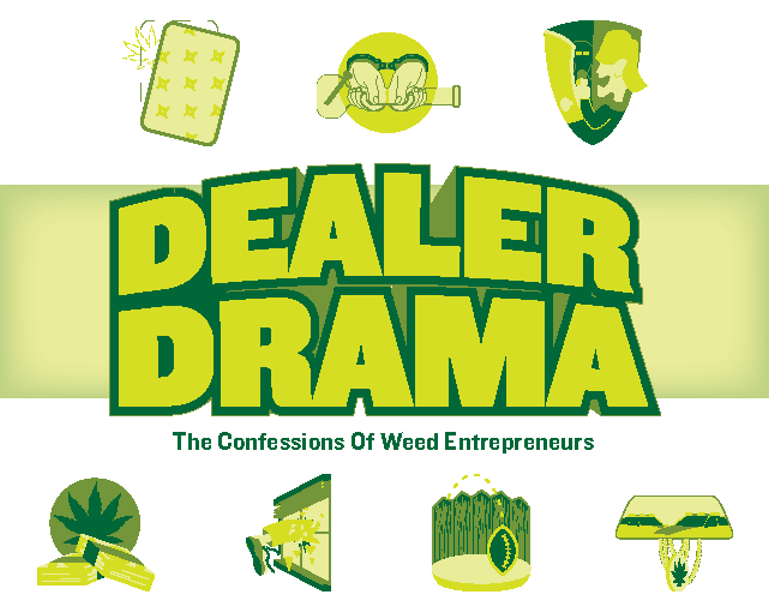 So you've decided to be a weed supplier. That's understandable. Growing or selling marijuana has the potential to earn you hundreds of thousands of tax-free dollars per year. You can make your own schedule. There's no degree required, but plenty of party supplies for you and your friends. Plus, sometimes you get the sense you're helping people with medical problems or anxiety issues, and you can feel good about that.

What's not to love?

Well, if the show Weeds taught us anything, it's that becoming a successful weed supplier can have serious unintended consequences. And while Charlotte isn't a Southern California town with cartel tunnels into Mexico (at least, we don't think there are cartel tunnels), our cannabis entrepreneurs face some real problems due to the continued illegality of the plant they're peddling.

Silas*, 28, was a mid-level dealer in Charlotte for six years before switching careers. "I've had my door kicked in multiple times. I've been robbed at gunpoint. I've been followed around the city by people I didn't know, but they obviously knew me. There were several times I came home, and my bed was moved over a few inches and I knew someone had been inside looking for my stash."

Silas says he has always been a nonviolent person with a distaste for weapons, but he was forced to buy a shotgun for his home.

New York transplant Andy*, 42, shares a similar story. He started his business by selling small amounts of weed to lower income customers. "It was extremely competitive. There was always someone trying to come take what I had via strong arm or at gun point."

He says one night a crew of guys busted into his apartment at 3 a.m. with guns drawn and took everything. After that, he and his associates bought guns for protection, but he soon changed his business model as well. "It just wasn't worth it," he says.

The craziest way someone got robbed, though? Silas: "A guy came over to make a run for me. He left his friend as collateral. I walked into my kitchen and immediately heard the sound of glass breaking. His friend had jumped out the window and was hauling ass down the street."

Growers, on the other hand, can't let anyone in their homes. "You have to basically become a hermit," says Conrad*, 35, a horticulturist who specializes in marijuana. "I can't have anyone over, ever. And I can't leave because someone might come over. I have to closely monitor my electricity use, which means sitting in the dark sometimes. I probably seem like a weirdo from the outside."

Conrad is a fierce Libertarian and says that back in 2008, CNN showed up on his doorstep to interview him about his support for Ron Paul. A campaign sign in his yard tipped them off. "They kept asking to come inside, but there were about 30 plants growing right in the window behind me. There's no way I could let in national news media!"

Because he doesn't deal with many people as a grower, his biggest challenge is neighbors. He once moved into a home and after unloading the truck, he and his partner tossed a football back and forth in the backyard. "It landed in the yard next door, and the older lady who lived there called the police! It obviously wasn't going to work out living next door to her, so we moved out the very next day."

WITH GOOD REASON, a weed entrepreneur's worst fear is the police. Selling or manufacturing marijuana is a felony and quantities over 10 pounds carry a mandatory minimum sentence starting at two years in this state. NC State Bureau of Investigation statistics show a 38 percent increase in selling and manufacturing arrests from 2004 through 2013. There's a prevailing sense among dealers that police know legalization is imminent, and they're following even the smallest leads now, trying to bust anyone they can.

"I had a crazy experience with police not long ago," says Andy. "It was just after my divorce and I'm pretty sure my ex-wife's crazy boyfriend called the police crime stoppers number and told them that I was a dealer. I hadn't sold anything in years. At this point, I was just a casual smoker. So one day I got a knock on the door and three officers were there. They said that they received a complaint from my neighbors about heavy traffic at my house. I said that was not the case because I only have a couple of people over, ever. I'm private that way. They asked to come in and talk, but they had no warrant, so I told them I'd answer any questions outside, and I did. They seemed satisfied and left.

"About 10 days later, BOOM! My front door was busted in and a full SWAT team, regular cops and detectives all with weapons drawn swarmed my house and searched everything. They tore it up. All they found was a pack of rolling papers and a bong. They asked me about heroin and all these other drugs. I told them they were wasting taxpayer money on a casual smoker. I was taken to jail for a bong!

"When I got home and finally read the search warrant, it stated they had found 15 hypodermic needles in my trash and that the lab had tested them positive for heroin. I have a dog that has diabetes and receives insulin shots twice a day. That was what was on those needles. They lied, thinking they had a big fish when all they did is ruin my door and waste time and money.

Silas, though, didn't get the courtesy of a first visit. Almost two years after he'd moved on from selling weed, he was deep into a new (legal) career and thriving at it. He had taken on a teenage intern, and they were spending a quiet evening at his house going over plans for an upcoming event. Suddenly, a SWAT team broke down his door.

"They immediately pointed a gun in my intern's face. This poor kid was just there to learn a craft from me. I felt terrible." Silas says they trashed every inch of his house, all the while making jokes with him about how soon marijuana won't be an issue, and saying maybe they could all laugh about this over a joint one day at a weed bar in NoDa.

"It made me sick," he says. "They were destroying everything I owned and ruining my reputation in the community over something they knew wasn't even a big deal."

Still, sometimes you get lucky. Nancy*, 33, says she's been selling weed since she was 16 without a run-in with police — until a couple of weeks ago. "I met a client in our designated spot. There's a system in place so we don't have to communicate via text or phone. We met in my car and had a quick exchange. As I was backing out, two cop cars pulled in from opposite directions behind us, blocking us in. I felt like after 17 years, my operation was about to come to a halt. I glared at my client, thinking he was behind it, and as quickly as they pulled up, they pulled away. I have no idea why. I was reminded to tighten up. I have to be here for my clients."

NANCY SAYS HER clients are nurses, business owners, lawyers, artists and even clergy. "Many use it for sleeping disorders, a few for anxiety. One person uses it to help them stay sober of alcohol and one uses it to fight an eating disorder. I've always enjoyed being surprised by the people I've taken on over the years. A mom I see once a month or so prefers it over the Xanax she's prescribed because it helps her symptoms, but still lets her remain alert and coherent for her child."

Silas says one of the worst things he ever saw was a regular client get his children taken away by the state because he was found guilty of possessing a small amount of pot. "They took away a loving, caring father from those children for what was essentially the equivalent of two beers." Silas says he doesn't know if his client's children were returned.

After Andy gave up his small bag operation mentioned earlier, he spent a few years selling in a corporate office. He says he sold to everyone from the mailroom guys to senior VPs. "Some wanted it for fun or stress relief, some of the older people for nerves and pains they had. It was funny to me how many from all walks of life smoked."

Silas says a lot of his clients were college kids from the wealthiest areas of Charlotte. "They always wanted to purchase in bulk and put it on their parents' credit cards. We'd have to meet at the store and they'd purchase a prepaid Visa card and hand it over. Who knows where these kids went after I got out of the game? They were probably forced to buy from a dealer selling harder things too, and maybe they eventually got hooked on those other substances.

"They always call weed a gateway drug. Maybe that's because in order to get some, you have to walk through a figurative gateway into a criminal underworld you never wanted any part of in the first place. And after you're there, you're exposed to things you never would've seen if you could just go buy it from an above-ground dispensary."

*Name has been changed.