Conan the Barbarian should be flogged | Reviews | Creative Loafing Charlotte

Conan the Barbarian should be flogged 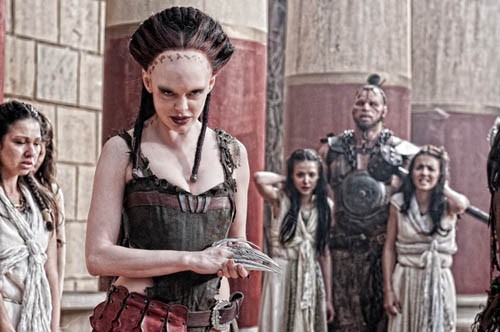 Seriously, this chatter about the 1982 version of Conan the Barbarian being some sort of classic needs to stop. John Milius' treatment of author Robert E. Howard's pulp hero was a lumbering bore, with a wooden Arnold Schwarzenegger not yet seasoned enough to work up the charisma that would serve him well in later pictures. Still, I'm now forced to recall the '82 model with at least some smidgen of fond nostalgia after sitting through the perfectly dreadful Conan the Barbarian (* out of four), 2011 Edition.

A humorless endurance test from the director (Marcus Nispel) who previously desecrated horror staples both good (The Texas Chain Saw Massacre) and bad (Friday the 13th) with so-what? remakes, this Conan fails in practically every respect. Despite being presented in 3-D, this sports characters who barely fill out one dimension. The battle sequences are staged with little variance and no imagination. There is one nifty FX scene involving an army of monsters made out of sand, but even this becomes idiotic once it's apparent that a single tap will cause them to fall apart (guess they should have been fashioned from adamantium instead).

As the title warrior who makes it his life's mission to avenge the death of his father (Ron Perlman), Jason Momoa has the requisite six-pack abs but otherwise comes off as such a contemporary jock that you half-expect him to eventually forget about the bloodletting and start discussing Cam Newton's chances as the Carolina Panthers' new quarterback. And speaking of Perlman as his pop, am I the only one who thinks his facial hair makes him look like the title creature from that dreadful '80s family flick, Harry and the Hendersons?

Perlman isn't the only decent actor wasted here: Providing the narration is no less than Morgan Freeman, who sounds so bored and distracted that it's likely he was reading his lines while simultaneously making an omelette or putting away his laundry. As the daughter of Conan's nemesis (an unrecognizable Stephen Lang), Rose McGowan, never more freaky, sports a receding hairline and talons that would make Freddy Krueger jealous. Her character is also blessed with an incredible sense of smell, although obviously not strong enough to keep her away from this suffocating stinkbomb.