Con of Thrones: George R.R. Martin among draws at ConCarolinas 2014 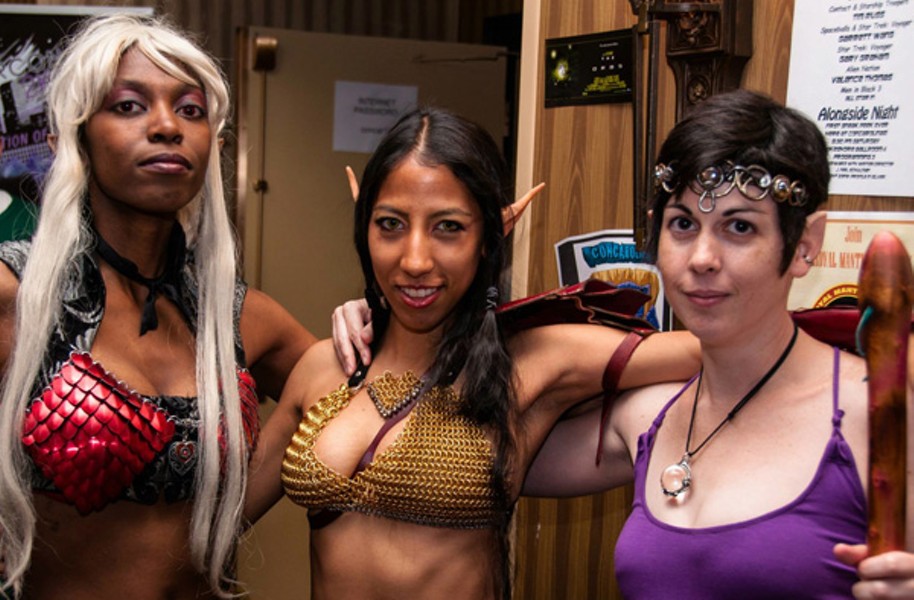 DRESSED TO THRILL: The view at a past ConCarolinas convention

For more than a decade, a three-day science fiction convention in Charlotte has been a gathering spot for fandom. And though this part of the country is known for its association with another genre, ConCarolinas is proof that there's room for it all.

"Our region is known for being the horror capital, but we have tons of sci-fi fans," says Jada Diaz, chair of the convention. "Anime has also gotten really big here. People just want to come meet up, have fun and share a love of all things fandom. From Klingons to stormtroopers to Doctor Who people, we have everyone."

ConCarolinas began as a humble two-day event in 2002. That particular year was dubbed "The Prequel," as 2003 brought the convention template used for future events: three days, several panels and big-name guests in the literary and film communities. From David Weber to Alan Dean Foster, the convention has made it a point to include respected writers as guests. And this year is no different, with George R.R. Martin coming to ConCarolinas as the author guest of honor. Martin is known for writing A Song of Ice and Fire, the book series that spawned the Game of Thrones television show on HBO. The show has garnered celebrity for the writer, who regularly appears on talk shows and panels to discuss the series. At this convention, he will take part in autograph sessions and readings.

But that's not all ConCarolinas offers. Not nearly all, according to Diaz. "That is like the real thick icing at the top of the cake," she says.

Fans can take part in a special-effects makeup workshop with RJ Haddy, who was a contestant on the popular SyFy competition show Face Off. There's the ConCarolinas Short Film Festival, which challenged filmmakers to submit videos under 30 minutes long. A costume contest provides a chance to earn something extra for all of those hours spent creating your outfit. Concerts will take place throughout, but those aren't the only places you'll see live music and dancing at the convention.

"We'll have people entertaining the people in line," Diaz says. "We want them to have fun. The League of Extraordinary Bellydancers will be out there. And so will musicians."

And, of course, there are panels — lots of panels. Subjects include the latest developments in real-world science, writing workshops, gaming introductions, costume-making advice, ghost-hunting and even a how-to on meeting up with fellow fans throughout the year between conventions.

Diaz recalls the panels as one of her favorite aspects of the convention when she was just an attendee. She had been going to the convention for a couple of years before taking on her current role. ConCarolinas organizers knew of her background as a convention manager for an information technology research firm and inquired about her interest in coming behind the scenes for the event.

Her advice for fans considering a trip to the convention? "Come, explore, and have fun."