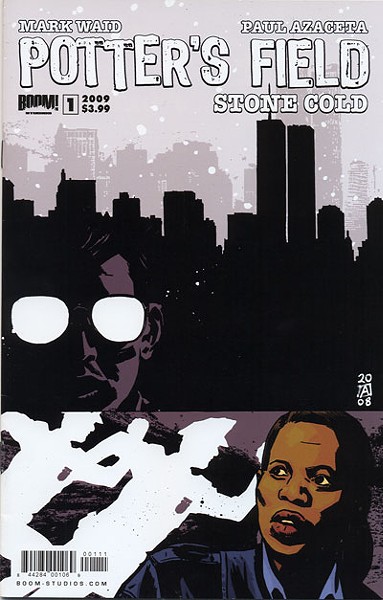 The Deal: Writer Mark Waid pens another installment of Potter's Field. The series follows a private sleuth known only as "John Doe" and chronicles his attempts to solve the murders of unidentified corpses.

The Good: With superhero comics dominating the comic book industry, it's hard to imagine that there was a time when crime comics were big sellers. That is until nuts like Frederic Wertham and his book Seduction of the Innocent put the kibosh on the crime genre (and almost all comic books in general). Lucky for us, creators who love crime stories -- like Frank Miller (Sin City) and Brian Azzarello (100 Bullets) -- have helped to resuscitate the genre. And that leads us to this latest issue of Potter's Field. From a story perspective, it's miles away from the stylized ultra-violence of Miller's or Azzarello's creations; Potter's Field reads more like an episode of Law & Order ... and no, that's not an insult. Like Law & Order, this issue serves up a done-in-one tale, and, with a focus on collecting clues and searching for evidence, it comes off more as a police procedural. That said, Waid is adept at crafting an interesting -- and thoroughly modern -- mystery, but still manages to throw in some poignant character beats. The art, as in the last (and first) Potter's Field limited series, is handled by the very capable hands of Paul Azaceta. The artist's heavily shadowed and angular drawings seem to blend the best aspects of Charlie Adlard with Mike Mignola.

The Bad: The story moves a little too fast. This comic could have easily been stretched into two issues.

The Verdict: Crime comics get another shot in the arm with Potter's Field.