Collateral Beauty: Death Be Not Proud 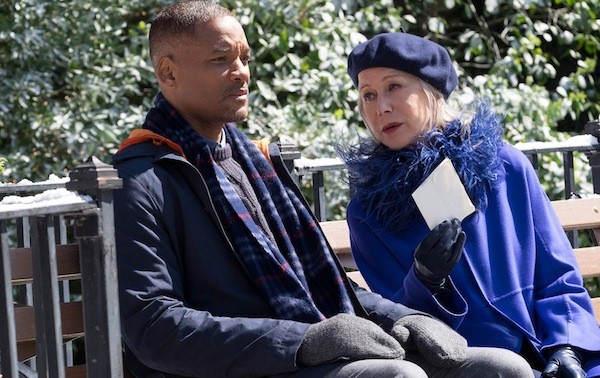 December is a breeding ground for Oscar-bait movies, but Collateral Beauty takes an even greater lunge at the gold than similar films. I daresay it's not gonna happen: The closest this train wreck will get to Oscar is if some guy with that name makes the poor choice to go see it during its theatrical run.

Boasting a premise that could only conceivably work with better scripting and the sort of honest sentimentality that a director like Frank Capra could have pulled off, this wince-worthy drama centers on Howard Inlet (Will Smith), a company head whose 6-year-old daughter died two years earlier. His gloom is threatening the future of the company, so his three best friends, who also happen to be his three best co-workers, try to find a way to shake him out of his stupor (as one compassionately complains, it's been two whole years, so why is he still grieving?!). Whit (Edward Norton), Claire (Kate Winslet) and Simon (Michael Peña) come up with an icky plan: Knowing that Howard has been blaming the concepts of Love, Time and Death for his misery, why not hire three actors to play those abstractions as physical manifestations? And why not film those thespians pretending to be Love (Keira Knightley), Time (Jacob Latimore) and Death (Helen Mirren) interacting with Howard, digitally remove them from the footage, and then have Howard declared mentally incompetent since it will look like he's merely a crazy guy talking to himself?

Wow. That's supposed to be the tactic that will make audiences line up behind Whit, Claire and Simon? Even Wall Street's Gordon Gecko would find such a grotesque maneuver beneath him, but in the script by Allan Loeb (whose credits include two Jennifer Aniston stinkers, The Switch with Jason Bateman and Just Go With It with Adam Sandler), nothing anybody does is ever considered out of line (that extends to another "good" character breaking into a mailbox in order to steal some letters). Worse, all three friends have problems that coincidentally can be aided by the three performers (Simon has an incurable disease and is facing Death; Whit wants his little girl to Love him; Claire wants a baby but Time is running out), but the resolutions to all three plot threads are insipid and uninspired.

Mirren has a few amusing moments as an actress so conceited that she thinks she should play all three abstractions, but everyone else is hamstrung by the odious, idiotic or irrational characters they're playing. As for Smith, earning an Academy Award nomination for The Pursuit of Happyness was the worst thing that could have happened to his career. Since then, he's been obsessed with snagging an Oscar and has largely been wasting his talents on humorless roles that suppress his natural buoyancy and charisma. But after Seven Pounds and now Collateral Beauty, even a Wild Wild West sequel is starting to sound good.