It was the year of imagination -- and ImaginOn

It was a year when new theater companies came and went. And old ones upped and died -- or took seriously ill.

Yet, late in 2005, new growth appeared on the landscape. Amid the hoopla of the new Charlotte Bobcats Arena -- and the celebrated implosion of the old convention center -- something fresh and pioneering appeared downtown.

The ironies were manifold. In the same year that the demise of Charlotte Repertory Theatre heaped shame and scorn upon the city, this new homeplace of Children's Theatre of Charlotte brought congratulations and acclaim. Less than a year after Rep self-destructed in quest of a Tony Award, a prestigious Tony Award winner, Peter Brosius, was thrilled by the concept of ImaginOn, praising its breakthrough synergy of youth theater and children's library while lauding Charlotte for its vision.

Continuing the trend of recent years, which have seen gleaming performing arts palaces arise at Davidson College and UNC-Charlotte, Central Piedmont Community College in November unveiled its new Academic and Performing Arts Center. Fronted by colonnades reminiscent of the Lincoln Memorial, the new CPCC building casts a lordly gaze upon the city skyline from its site on Kings Drive.

It boasts one helluva new theater, the 1,000-plus seat Halton. With an orchestra pit accommodating two dozen musicians, Halton Theater immediately moved to the head of the class as the best space in town for musicals and small-scale operas. Productions of The Sound of Music, Carmen and Jesus Christ Superstar have already shown that the Halton is playing a key role in lifting the school's artistic game.

While the new Halton Theater elevated CPCC's stature -- spawning high expectations for its first summer theater season yet to come -- ImaginOn has cemented Children's Theatre's dominance in the wake of the Rep's unraveling.

Opening their state-of-the-art McColl Family Theatre at ImaginOn with a dazzling production of The Lion, the Witch and the Wardrobe, artistic director Alan Poindexter and his brilliant design team showed what they could do in a space designed from the ground up for youth theater. The inaugural ImaginOn show dominates both the drama and the technical categories in Creative Loafing's 2005 Charlotte Theatre Awards. Lion also roars to a decisive triumph as Show of the Year.

The production was nearly as mind-blowing as ImaginOn itself. Never before has an American youth theater partnered with a library, a union that couples a governmental organization with a nonprofit entity.

If Children's Theatre was taking an imaginative leap, the Public Library of Charlotte & Mecklenburg County was on a hallucinogenic roller coaster. Sure, children's libraries have been around for generations, but can you name one that stands completely apart from the adult library?

ImaginOn was a leap into the unknown for PLCMC -- and for the theater's innovative architects. Before he participated in planning ImaginOn, Benton Delinger of Theatre Projects Consultants played a key role in such famed facilities as the Goodman in Chicago, Kimmel Center in Philly and the Roundabout on Broadway. Still, he marvels at the leap of faith that birthed ImaginOn.

"Just the fact that they say, 'Well, let's just pull out the library and build a kids' library.' Just as a starting point, that's pretty amazing to me," says Delinger. "And then out of that, let's build it with a theater company. There is such great synergy between Children's Theatre and the Children's Library, and I love it. I tell all the other clients I'm working with, 'Pay attention to this part of the country, because it shows a strong commitment to children and to education and the arts and library sciences that I think is spectacular.'"

Poindexter led an expeditionary group that reconnoitered the best youth theater organizations in the country, picking brains, surveying facilities and discovering programs that could be adapted to ImaginOn. Among the places he visited were Seattle Children's Theatre and the Children's Theatre Company in Minneapolis. 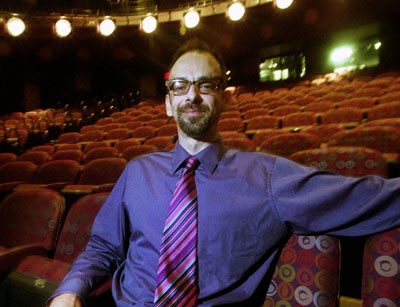 Having won the Regional Tony Award in 2003, the Minneapolis company was an obvious destination for a Poindexter pilgrimage -- particularly since it shares its real estate with the Minneapolis Institute of the Arts. Peter Brosius is the artistic director whose vision brought national acclaim -- and the Tony -- to his hometown.

Brosius sees ImaginOn as a momentous breakthrough. "Obviously, when you combine facilities like this, the possibility exists for some incredible synergies," he observes. "Those take time, those take effort, but the idea of creating a youth-oriented destination in Charlotte is just thrilling. And I hope people start making the trek to Charlotte the way they've been making the trek to the Twin Cities. It's going to be exciting for the entire nation."

Brosius is helping to build that excitement by exporting his company's Neighborhood Bridges Program to Charlotte. It's a youth program designed to develop critical thinking and writing skills through storytelling -- the common mission that links this city's Children's Theatre with the public library.