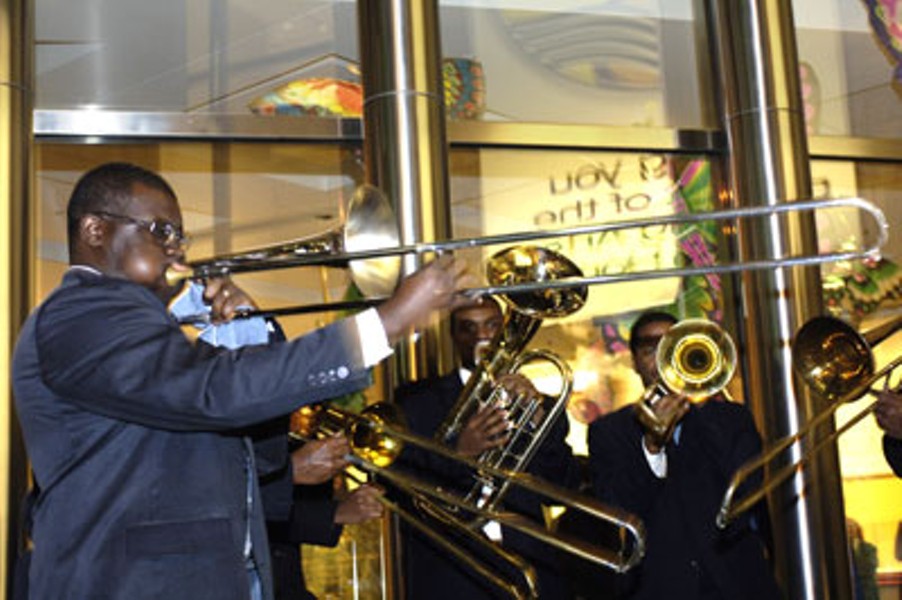 You'd never know it, but Charlotte is a musical hotbed of great historical and cultural significance. First off, Charlotte's been a major musical recording center since the 1920s when the first bluegrass recordings were made here. Another area of our pre-eminence is in Gospel recordings. Back in the 1930s, vocal groups like the Heavenly Gospel Singers and the Golden Gate Quartet (and right up to the more recent Gospel Christian Singers of the previous decade) made numerous recordings here. In their day -- the '30s and '40s -- they were superstars. Another important gospel thread is the shout bands of Charlotte; a large number of bands associated with the United House of Prayer have been an important cultural factor. Charlotte is the home of HOP's Clouds of Heaven, fronted by Cedric Mangum.

As we enter February, Black History Month, we spoke with Mangum at his barber shop in Charlotte and discussed his time playing trombone with the Clouds of Heaven: "I've been playing 30 years or more."

The Clouds of Heaven is no ordinary band but an aggregation of trombones, related horns and pounding, pulsating rhythms, generally performing in services at the House of Prayer. It's only been in the last 10 years that the Church has allowed its music to be heard in more secular settings. If there is such a thing as gospel instrumentals, the shout bands are the best in their chosen field.

You may have seen some trombone aggregations playing at night in the Square uptown during the past few months. According to Mangum, part of the Clouds of Heaven was performing there, "raising money for a trip to Los Angeles, January 28th and 29th, celebrating our Convocation."

To explain the music, the House of Prayer, founded by Daddy Grace, essentially began in Charlotte in the late 1920s. Though the Mother Church is headquartered in Washington D.C., the largest following is in Charlotte and the Carolinas, with over 100 churches located as far away as New York and Los Angeles. Initially trombones were not as dominant in their services, but music was always a key part. Shout bands with trombones blossomed in the 1940s and '50s, along with rise of Black Gospel and its golden age. By the time Daddy Grace died in 1960, the practice of large trombone bands became the norm in the United House of Prayer.

Shout bands are closely related to Southern brass bands but are way different in spirit. Though compared with the brass bands of New Orleans, their purpose is not the same -- as gospel is to pop or partying is to praying -- despite the fact that they sound similar. Use of t-bones in shout bands was perhaps guided by Psalm 150 which says, "Praise ye the Lord. Praise him with the sound of the trumpet," or Psalm 98, "With trumpets and the sound of the horn make a joyful noise before the king, the Lord." Either way, the music is a joyful benediction and a distinctively vital, home grown musical tradition.

It's a call and response type music, African in origin, though Americanized in practice, featuring dirge-like, languid intros and gradually increased rhythms, tempo and volume creating a congregation of shouting, ecstatic, tongue-speaking believers. The massed horns create a powerful run which gets more propulsive as it repeats a phrase or line repetitively, faster and faster. As this back timing increases, the run takes over. Similar to gospel in its prime, the run occurs when the lead trombones and the second lead improvise on top of the thundering, hypnotic rhythms -- in the manner of how Claude Jeter would improvise over the Swan Silvertones.

In church, there is a vital counterpoint between the preacher and the band. The shout bands generally support and punctuate the speaker's spirit and mood and at times take over, elevating the worshippers into a religious and mystical fervor and frenzy. If you attend a prayer service in Charlotte or the annual convocation, you can witness this interplay.

However, according to Mangum, "We played recently at (Jan. 16) at an ASC (Charlotte Arts and Science Council) kickoff drive. We played as a spin-off band of the Clouds of Heaven, to give people a version of the real sound. Some people don't want the whole big band. That's about 25 or 30."

Asked why he plays, Mangum says, "I like to reach people feeling down and uplift their spirits. I was six or seven when I started. I joined the band in 1969."

He adds that the full Clouds of Heaven, "Including me personally, on Jan. 26, are playing in Raleigh at the Museum of History. That's a great sound."