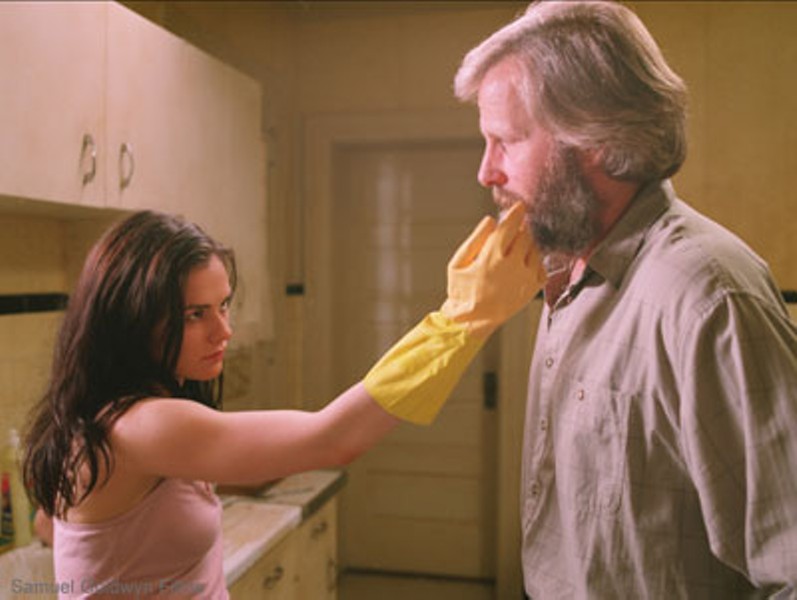 Phil Bray / Fox Searchlight HOT FOR TEACHER Professor Berkman (Jeff Daniels) flirts with a student (Anna Paquin) in The Squid and the Whale.

THE ICE HARVEST The Ice Harvest is being promoted as this year's Bad Santa, but it's just bad, period. Its only merit belongs to Oliver Platt, who's top-notch as the obnoxious, loud-mouth drunk who invariably attaches himself, barnacle-like, to some poor sucker's arm during a festive holiday party. Otherwise, this merely goes through the motions by displaying all the requisite black humor and hipster stylings without stopping to figure out what generally makes these ingredients work. That Harold Ramis is attached as director isn't too shocking -- his resume is more hit-and-miss than people realize -- but it's hard to believe that the script (adapted from Scott Phillips' novel) is by Pulitzer Prize winner Richard Russo (Empire Falls) and multi-Oscar winner Robert Benton (Kramer vs. Kramer), neither exactly a slouch in the writing department. John Cusack, who's played this sort of mellow, wise-cracking character many times before, stars as Charlie Arglist, a Wichita lawyer who, along with his partner Vic (Billy Bob Thornton), steals over $2 million from a local mob boss (Randy Quaid) and then begins to sweat when an ice storm prevents them from skipping town. As Charlie trudges around the city waiting to make his great escape, he repeatedly bumps into two acquaintances: Renata (Connie Nielsen), a strip club owner who suspects Charlie's up to something, and Pete (Platt), a vulgar souse who (among other grievances) bemoans his marriage to Charlie's gold-digging ex-wife. As an exercise in neo-noir, the film is surprisingly inert, and as a dark comedy, it fails to offer many laughs in any situation outside of those involving Platt's inebriated freefall. Rating: * 1/2

THE SQUID AND THE WHALE Marital discord receives an innovative treatment in this impressive feature that earned Noah Baumbach writing and directing awards at this year's Sundance Film Festival. In 1986 Brooklyn, college professor Bernard Berkman (Jeff Daniels) and his wife Joan (Laura Linney) finally reach the conclusion that their marriage is chugging along on its last fumes. Upon separating, they subject their two sons, 16-year-old Walt (Jesse Eisenberg) and 12-year-old Frank (Owen Kline), to all manner of ill-advised actions and outbursts, which only serve to confuse and alienate the boys even further. Walt has always felt a kinship with his father, viewing him as an intellectual (and relationship guru) worthy of emulation, while Frank has drifted more toward his mother, a woman whose sexual frankness forces the preteen to grow up quicker than he should. The Squid and the Whale is tantalizing in the way in which it presents just enough information so that we can't help but come to the conclusion that the self-absorbed Bernard and Joan are lousy parents -- yet then it pulls the rug out from under us by offering peeks into previous periods of domestic bliss. Never denigrating itself by offering facile answers, it examines the difficulties of joint custody, the intrinsic flaw in favoring one parent over the other and the continued ability to wring mood out of Tangerine Dream's score for Risky Business (used to good effect here). All four lead performances are outstanding. Rating: *** 1/2

BEE SEASON For the sake of variety, we need more spirituality in cinema, which is why the very existence of Bee Season is a blessing even if its haphazardness makes it something of a curse. When 9-year-old Eliza Naumann (excellent Flora Cross) suddenly blossoms as a spelling champ, her college professor dad (Richard Gere) suspects she might be a modern-day mystic able to connect directly with God through language. Yet as he devotes all his energy to her, he fails to notice the increasingly bizarre behavior of his wife (Juliette Binoche). Binoche valiantly struggles to carry her unwieldy subplot, so clumsily presented that it repeatedly threatens to sink the entire project. Yet the efforts of the other characters to navigate their own spiritual waters remain compelling, even if it leads to a finale that isn't powerful as much as it's puzzling. Rating: ** 1/2

CHICKEN LITTLE With its hand-drawn animation division boarded up and its partnership with Pixar in flames, Walt Disney Pictures has taken the next step by creating its own fully computer-animated movie. Yet if Chicken Little represents the future of Disney animation, then the sky is indeed falling: This is as far removed from such old-school classics as Pinocchio and Beauty and the Beast as roast duck is from chicken gizzards. The story is serviceable, centering on a diminutive bird (voiced by Zach Braff) whose warnings about an alien invasion are ignored by the other anthropomorphic animals. And to be fair, the film has its moments, most of them courtesy of a character known as Fish Out of Water (basically an animated Harpo Marx). But the central thrust -- a standard "underdog wins the day" slog that on a dime turns into War of the Worlds -- is the same sort of hollow experience that has all but drained the traditional toon tale of its potency over the past decade-plus. Rating: **