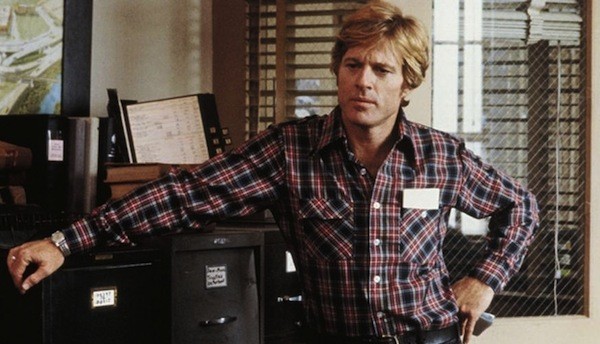 BRUBAKER (1980). In the same year that Robert Redford made his directorial debut with Ordinary People (and won an Oscar for his efforts), he lent his box office clout to Brubaker, a tough prison yarn that was a commercial success despite its hard-sell topic (to put it in perspective, it grossed almost as much as the same year's popular comedy Caddyshack and popular slasher flick Friday the 13th). Loosely based on a true story (with an Oscar-nominated screenplay by W.D. Richter and Arthur Ross), the movie follows prisoner Henry Brubaker (Redford) as he enters an Arkansas state penitentiary, where he immediately sees that the institution is teeming with corruption and weaker inmates are being beaten, tortured and/or raped on a daily basis. Eventually, Brubaker reveals himself to be not a prisoner but rather the new warden, and he rapidly starts to work on comprehensive prison reform. But his efforts are thwarted not only by many inside the institution but also by politicians and board members who are resistant to any change. The first half-hour is powerful stuff, but after Brubaker reveals his true identity, the movie begins to falter, with the one-dimensional nature of the characters (particularly the earnest warden himself) eventually stripping the story of any dramatic charge. Only Yaphet Kotto, as one of the prison trustees, is allowed any ambiguity in his character, although even here, there's never any real doubt where his allegiance will ultimately fall. The cast is packed with name actors and familiar faces, including Morgan Freeman in one of his earliest big-screen roles (as a Death Row inmate).

The only Blu-ray extras consist of the theatrical trailer (which, in the grand tradition of the worst trailers, mainly uses spoiler footage from the last half-hour of the movie) and three TV spots. 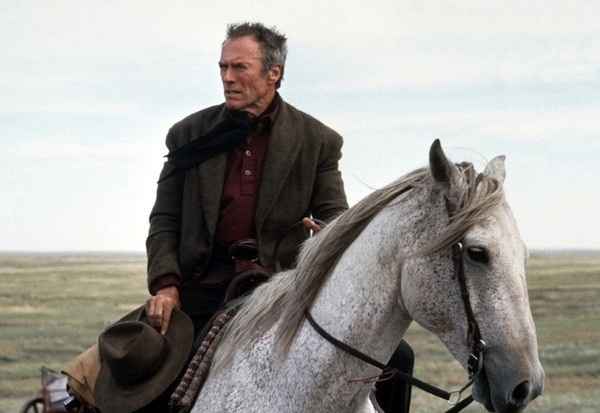 CLINT EASTWOOD 20-FILM COLLECTION (1971-2012). Long before Harry Potter came along to fill the Warner Bros. coffers, it was Clint Eastwood who was churning out countless hits (and, yes, a few bombs) for the studio. The accomplished producer-director-star forged a permanent partnership with the company back in 1975, and here we are, approximately 40 years and 40 pictures since that titanic teaming. In 2010, the studio released the massive DVD set Clint Eastwood: 35 Films 35 Years at Warner Bros., and this week, it's adding to the count by debuting the DVD set Clint Eastwood: 40-Film Collection. And on the Blu-ray front? Well, there's the rub. The studio has released this impressive box set, but it only includes 20 titles as opposed to the DVD collection's 40; worse, all movies have already been readily available on Blu-ray, meaning this qualifies as a partial cash-grab on Warner's part. I say partial because great care has obviously gone into this handsome set: It features a brand-new documentary by film critic and Eastwood biographer Richard Schickel and a 48-page book featuring excerpts from last year's hardcover tome Clint Eastwood: Master Filmmaker at Work. But for those of us who have been clamoring for the studio to release more Eastwood on Blu-ray — I personally would like to see White Hunter Black Heart and Tightrope, while others have pleaded for The Bridges of Madison County and Bird — it's a disappointment to see nothing new under the Blu sun. (And don't get me started on Universal, which I believe hasn't released any of its numerous Eastwood vehicles on Blu-ray: Play Misty for Me, Joe Kidd, Two Mules for Sister Sara, etc.) 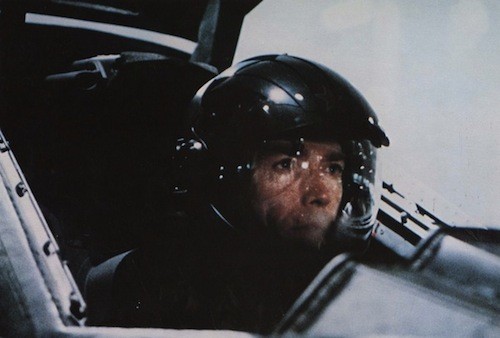 Still, for those who don't own many (or any) Eastwood features, this is a steal for the price, with each movie coming out to between $4.50 to $6.50 depending on the sale. There's too much of an emphasis on his most recent works — I'm willing to bet most film fans would rather have 1968's terrific Where Eagles Dare (already available on Blu from Warner) in this set than such stodgy affairs as 2011's J. Edgar and 2012's Trouble with the Curve — and the collection oddly only includes three of the five Dirty Harry flicks. But the set does contain his superb Best Picture Oscar winners, 1992's Unforgiven and 2004's Million Dollar Baby, as well as other gems like 1976's The Outlaw Josey Wales, 2006's Letters from Iwo Jima and 2008's Gran Torino. A couple of guilty pleasures can also be found: I've never hated 1982's Firefox like the rest of the human race, while 1978's critically lambasted Every Which Way But Loose is nevertheless beloved by millions (including me when I was, oh, 14 or so). And while this set houses a few mediocrities (1993's A Perfect World, 2009's Invictus), it only contains one truly abysmal film: 1977's The Gauntlet, a stupid cop flick showcasing then-girlfriend Sondra Locke's worst performance.

Besides the new documentary, Eastwood Directs: The Untold Story (featuring interviews with Meryl Streep, Morgan Freeman, Martin Scorsese and others), the set also contains an extended version of the 2010 documentary The Eastwood Factor. Other extras accompanying the individual movies include audio commentaries, making-of featurettes and much more.

Movies: Ranging from * (The Gauntlet) to **** (Unforgiven, Million Dollar Baby) 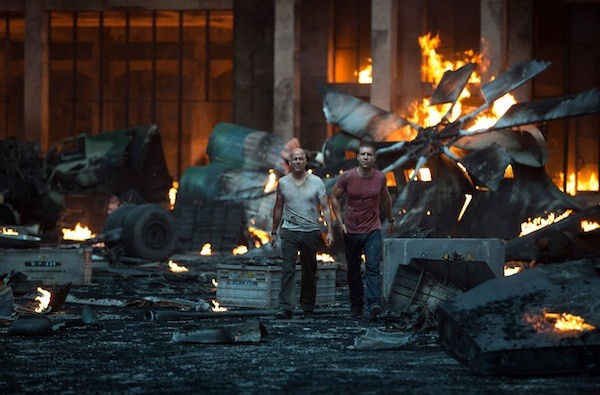 A GOOD DAY TO DIE HARD (2013). It's been exactly a quarter-century since Bruce Willis became a movie star with the action classic Die Hard, but while 2013 finds the actor headlining the fifth film in the never-say-die series, it's clear that A Good Day to Die Hard does his image — and his iconic character — no favors. The first Die Hard entry set outside the U.S., this finds McClane — once an exciting screen presence, now simply an old grouch — heading to Russia to check on his estranged son Jack (Jai Courtney), who turns out to be a covert agent for the CIA. Jack's mission is to extract a political prisoner (Sebastian Koch), which becomes a mission impossible once Pappy McClane arrives on the scene and screws everything up. But no worries: Big Daddy has plenty of time to make amends, as he proceeds to blow away Russkies, save his son's skin and rack up an obscene amount of collateral damage. John McClane's signature catchphrase "Yippee ki-yay" is uttered, though he's more prone this time around to channeling City Slickers' Billy Crystal by shouting, "I'm on vacation!" — a line that isn't especially witty (or accurate) the first time he says it and certainly has worn out its welcome by the time he amends it to "I'm on fucking vacation!" Unbelievably, this great character has made a complete transformation from a likable, sympathetic Everyman in 1988 to an arrogant, insufferable jerk in 2013. All traces of personality have disappeared, leaving only a plastic action figure merely going through the motions. Whereas McClane employed ingenuity in at least the first two Die Hard films, his MO here is to mainly aim and shoot. He even gets to be the Ugly American, yelling at an understandably irate driver (whose car he hit), "Do I look like I speak your fucking language?" before punching him. The role has been so thoroughly siphoned of individuality and personality than if there's another sequel, Willis doesn't even have to play McClane: The producers can nab Schwarzenegger, Stallone, Bieber or anybody else their avaricious little hearts desire.

The Blu-ray includes both the R-rated theatrical version and an unrated extended cut. Extras include audio commentary by director John Moore and first assistant director Mark Cotone; a making-of piece; deleted scenes; and the behind-the-scenes featurette Anatomy of a Car Chase. 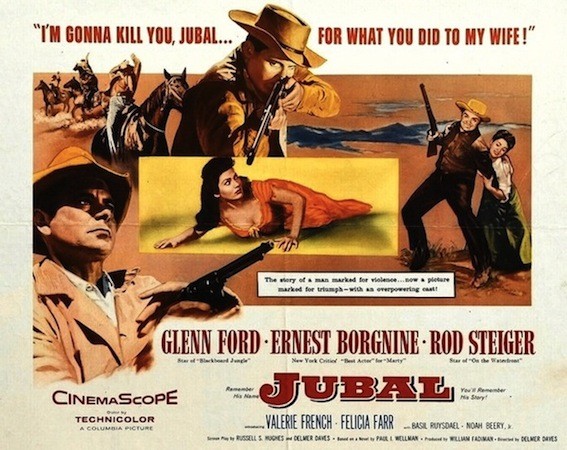 JUBAL (1956) / 3:10 TO YUMA (1957). For three consecutive years, director Delbert Daves teamed with actor Glenn Ford to shoot a Western, and Criterion has elected to release the first two on Blu-ray and DVD. (The third, for the record, is 1958's Cowboy, co-starring Jack Lemmon.)

Based on a novel by Western author Paul Wellman, Jubal is the lesser known of this Criterion twofer, but that's not to say it's markedly inferior in any way. With a massive nod in the direction of Shakespeare's Othello, the film stars Ford as Jubal Troop, a down-on-his-luck stranger who's given a job as a cattleman by jolly rancher Shep Horgan. Since Shep is played by Ernest Borgnine, we know the character's a crude, fat slob, which explains why his beautiful wife Mae (Valerie French) sports ideas about rolling around in the hay with Jubal. But a fellow cowhand, the mean-tempered Pinky (Rod Steiger), resents Jubal's presence on the ranch as well as his effect on Mae, so he hatches a plan that would make Iago proud. Jubal is a movie of roiling tensions, as the four lead characters constantly are pitted against each other due to jealousy, deceit and misunderstandings. Ford, a perpetually underrated actor, is appropriately stoic in the central role, and it's impossible to watch Steiger's scenery-chewing work without recalling his similarly slimy turn as a ranch laborer in the previous year's Oklahoma! Future superstar Charles Bronson, still comfortably ensconced in his position as one of Hollywood's most reliable supporting actors, turns up as a cowboy who befriends Jubal. 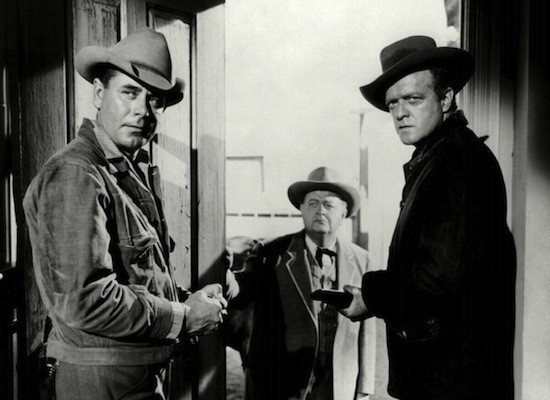 Like The Gunfighter and Winchester '73, 3:10 to Yuma is one of those defining '50s Westerns that is well-known by film buffs but has never reached the familiarity level of a High Noon or Shane — the only reason it's relatively recognizable to the masses today is because Russell Crowe and Christian Bale headlined a remake back in 2007. Based on an Elmore Leonard story, this one finds Ford portraying the ostensible bad guy: Ben Wade, an outlaw who's been captured and awaiting transportation to prison. With no one else brave enough to accept the job of babysitting the criminal until the train is ready to leave for the Yuma jail, Dan Evans (Van Heflin), a farmer in desperate need of the cash the assignment pays, volunteers for the job. This leads to a battle of wills as Wade plays mind games with his captor as they both wait it out in a cramped hotel room; meanwhile, Wade's gang strategizes on how best to spring its leader. Unlike Jubal, which was beautifully shot in Technicolor and CinemaScope, 3:10 to Yuma is a black-and-white affair filmed in the more standard widescreen aspect ratio, a sound decision given the claustrophobic setting and psychological grit.

Unusual for a Criterion release, there are no extras on the Jubal Blu-ray. Extras on 3:10 to Yuma consist of new interviews with Leonard and with Ford's son, Peter Ford.

WARM BODIES (2013). Another zombie movie? As the kids would type on Twitter, "FFS." Yet even after we thought the genre was exhausted with 28 Days Later ... and then Shaun of the Dead ... and then Zombieland ... and then some ... here we find fresh blood (and more than a dash of Romeo and Juliet) pumped into the format with Warm Bodies, an engaging adaptation of Isaac Marion's novel that began life as a short story floating around the Internet. Nicholas Hoult, who also headlined this spring's Jack the Giant Killer, narrates the movie from his vantage point of playing one of the undead: He's "R," a zombie who becomes smitten with the human Julie (Teresa Palmer), more so after he eats the brains of her boyfriend (Dave Franco) and acquires all of his memories. Initially afraid of R (understandably so!), Julie comes to realize that he's not a threat, and together they wonder if his progression back to normalcy means that it's no longer necessary for her militaristic dad (John Malkovich) and his troops to annihilate all zombies. The laughs are modest and the scares are nonexistent, but the romance is awfully charming — and Hoult and Palmer make an irresistible couple.