Cinderella: It's the Great Pumpkin 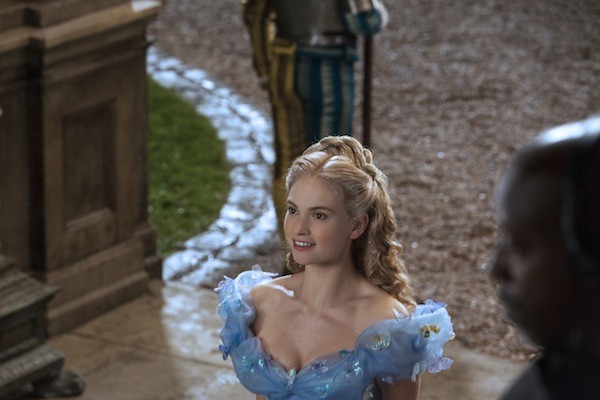 Filmgoers need another fairy tale flick about as much as they need another Pirates of the Caribbean sequel (oops, too late), yet Cinderella swiftly casts aside all doubts and derision to reveal itself as a particularly enchanting piece of cinema. What's perhaps most startling about the film is that it's not a revisionist take on a beloved tale, a slant that's been all the rage thanks to the likes of Into the Woods, Snow White and the Huntsman, Oz the Great and Powerful and, of course, the Sleeping Beauty offshoot Maleficent. Instead, it's a traditional telling that's been brought with loving care to the screen by director Kenneth Branagh (rebounding from last year's ill-advised Jack Ryan: Shadow Recruit) and scripter Chris Weitz (the About a Boy adapter who's just been tapped to pen the Star Wars spin-off movie Rogue One).

There have been many different versions of Cinderella throughout the ages, but for this take, Weitz has borrowed primarily from Charles Perrault's 1697 written version Cendrillon and Walt Disney's 1950 animated version. (Since this new live-action film is a PG confection from the Disney studio, it's perhaps best that Weitz bypassed the Brothers Grimm version, which ends with the wicked stepsisters having their eyes gouged out by doves!) Our heroine is named Ella, and she's raised as a small girl by the two most loving parents imaginable. But tragic circumstances ultimately find the adult Ella (Lily James) sharing the family home with her stepmother, Lady Tremaine (Cate Blanchett), and her stepsisters Anastasia (Holliday Grainger) and Drizella (Sophie McShera). All three treat Ella horribly, and while Lady Tremaine may have her reasons for doing so (however misguided they may be), her two spoiled daughters act out of pure rottenness. The trio treat Ella (mockingly renamed Cinderella by Drizella since she's often covered in cinder ashes) as a servant rather than a family member, yet while her miserable lot in life would break almost anyone else, Ella remains strong and cheerful, subsequently rewarded for her kindness via the attention of a smitten prince (Richard Madden) and the magical maneuvers of a fairy godmother (an amusing Helena Bonham Carter).

But wait, why am I recounting a story known by everyone ages three to 103? No worries: In the case of this movie, familiarity hardly breeds contempt. On the contrary, this Cinderella presents the story in such a fresh and immersive manner that we often feel like we're experiencing it for the very first time. That's no dig against the 1950 Cinderella, which remains a lovely work in its own right. But this take is clearly its equal — and sometimes its superior — when it comes to working on our emotions. There's never a moment when our heart isn't going out to Cinderella, and with James delivering a lovely performance in the role, we're anxious for her to finally arrive at her Happily Ever After. Forget all those countless sports movies where a ragtag team goes from worst to first: Cinderella is the ultimate underdog tale, and this version sparkles as beautifully as any championship trophy.