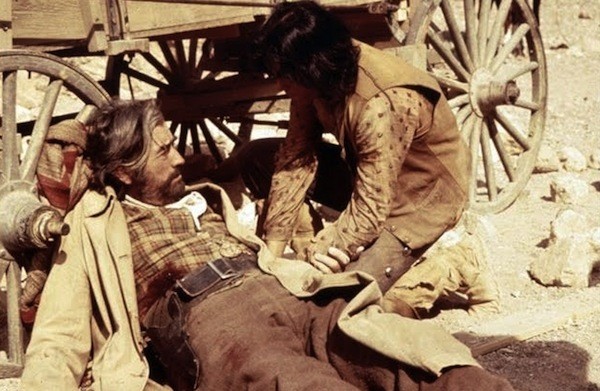 BILLY TWO HATS (1973). After enjoying a 21-year run as a top box office star, Gregory Peck endured a decade-long downturn, appearing in seven consecutive flops in the years sandwiched between 1966's Arabesque and 1976's The Omen. Billy Two Hats was the last of the septet, and like his other duds from this era, it's by no means awful, just routine and forgettable (although I admittedly have a soft spot for the 1969 Western Mackenna's Gold, butchered mess though it may be). Forget the Spaghetti Western: Billy Two Hats has often been called the Matzo Western, considering it was filmed entirely in Israel. Perhaps in preparation for his wild Nazi madman in 1978's The Boys from Brazil, Peck exuberantly tries out a different type of accent here, playing bushy-bearded Scottish outlaw Arch Deans. Displaying fierce loyalty to his half-Indian sidekick Billy Two Hats (Desi Arnaz Jr., looking lost so far away from the Desilu studio), Arch rescues him from a relentless sheriff (Jack Warden), only to become injured in the process. Ensuing events lead them to a small ranch house, where a battered mail-order bride (Sian Barbara Allen) finds herself attracted to Billy's gentleness. With In the Heat of the Night director Norman Jewison serving as a producer, it's no surprise that the movie attempts to deal with matters of racism (several of the characters look down on Billy for being a "breed"), but good intentions aren't enough to distinguish this ordinary oater.

Blu-ray extras consist of an interview with director Ted Kotcheff and a trailer gallery.

CINDERELLA (2015). Filmgoers need another fairy tale flick about as much as they need another Pirates of the Caribbean sequel (oops, too late), yet Cinderella swiftly casts aside all doubts and derision to reveal itself as a particularly enchanting piece of cinema. What's perhaps most startling about the film is that it's not a revisionist take on a beloved tale, a slant that's been all the rage thanks to the likes of Into the Woods, Snow White and the Huntsman, Oz the Great and Powerful and Maleficent. Instead, it's a traditional telling beautifully handled by director Kenneth Branagh and scripter Chris Weitz. Our heroine is named Ella, and she's raised by the two most loving parents imaginable. But tragic circumstances find the adult Ella (Lily James) sharing the family home with her stepmother, Lady Tremaine (Cate Blanchett), and her stepsisters (Holliday Grainger and Sophie McShera). All three treat Ella horribly, and while Lady Tremaine may have her reasons for doing so (however misguided they may be), her two spoiled daughters act out of pure rottenness. The trio treat Ella (mockingly renamed Cinderella by Drizella since she's often covered in cinder ashes) as a servant rather than a family member, yet while her miserable lot in life would break almost anyone else, Ella remains strong and cheerful, subsequently rewarded for her kindness via the attention of a smitten prince (Richard Madden) and the magical maneuvers of a fairy godmother (an amusing Helena Bonham Carter). Cinderella presents the story in such a fresh and immersive manner that we often feel like we're experiencing it for the very first time. There's never a moment when our heart isn't going out to Cinderella, and with James delivering a lovely performance in the role, we're anxious for her to finally arrive at her Happily Ever After.

Blu-ray extras include a making-of featurette; an alternate opening; and the animated short Frozen Fever. 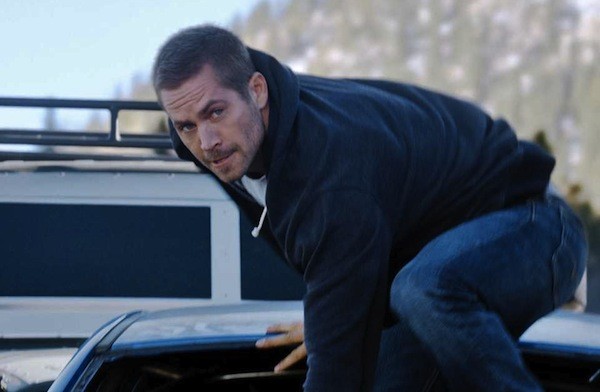 FURIOUS 7 (2015). Previously on F&F: The tag at the end of Part 6 found a dapper British chap played by Jason Statham killing one of the members of the DIY family lorded over by Dom Toretto (Vin Diesel). The assassin is Deckard Shaw, brother to the villain vanquished by the speed racers in the last installment. Deckard is out for revenge, meaning no one is safe — not Dom, not Letty (Michelle Rodriguez), not married-with-child couple Brian (Paul Walker) and Mia (Jordana Brewster), and not federal agent Luke Hobbs (Dwayne Johnson). There are a pair of smashing set-pieces on display, as well as enough locale switches to rival those found in a James Bond outing. Unfortunately, the picture can't maintain its momentum until the end, and the final skirmish, set on nocturnal city streets, is a letdown and ultimately feels like leftover footage from The Dark Knight. What's more, the sorts of savory plot twists present in the previous two pictures are nowhere to be found, having been replaced with Days of Our Lives-style domestic drama. Yet ultimately, the film proves to be a fine tribute to Walker. When he was tragically killed in a car crash halfway through production, the decision was made to complete the film rather than scrap it. To achieve that result, director James Wan and his crew employed a mix of body doubles (primarily Walker's two brothers) and CGI to fill in any gaps, and it turns out to be a seamless job. Between these efforts as well as a touching "For Paul" coda, the film truly pays respect to the young actor.

The Blu-ray contains both the theatrical version and an extended cut that runs two minutes longer. Extras include behind-the-scenes featurettes focusing on some of the more memorable action/stunt sequences; deleted scenes; a look at the cars seen in the movie; and the music video for Wiz Khalifa and Charlie Puth's "See You Again." 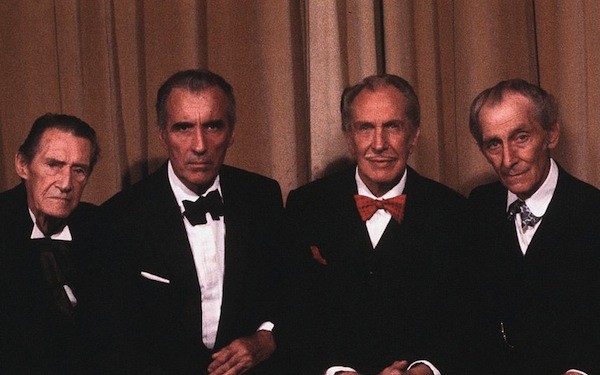 HOUSE OF THE LONG SHADOWS (1983). For such a largely forgotten film, this adaptation of Earl Derr Biggers' novel Seven Keys to Baldpate — by some accounts the ninth screen version, with four appearing in the silent era alone — holds its fair share of notable achievements. It's the only film that managed to team Vincent Price, Christopher Lee, Peter Cushing and John Carradine, four giants in the horror field. It was the 24th and final movie co-starring the titanic team of Cushing and Lee. And it was the last feature helmed by Pete Walker, who earlier had made his mark as the director of such controversial sex-and-gore flicks as The Flesh and Blood Show and House of Whipcord. The Cannon Group head honchos Menahem Golan and Yoram Globus (who produced the film) dragged Walker out of retirement and told him they wanted a horror film in the old-school tradition; with Michael Armstrong providing the script, he served up this enjoyable if slight comedy-mystery in which spoiled American author Kenneth Magee (Desi Arnaz Jr.) bets his British publisher (Richard Todd) $20,000 that he can write a novel on the order of Wuthering Heights in a 24-hour period. So that he may work in peace, he travels to a Welsh mansion that's supposed to be empty; instead, the house soon fills up, thanks to the presence of the elderly caretaker (Carradine), his grown children (Price, Cushing and Sheila Keith), a prospective buyer (Lee), and his publisher's assistant (Julie Peasgood). Arnaz is deadly in the largest role — and the two twist endings (present in the source material) are strictly take-it-or-leave-it — but the presence of Price, Cushing and Lee allow all the shenanigans to go down easy. 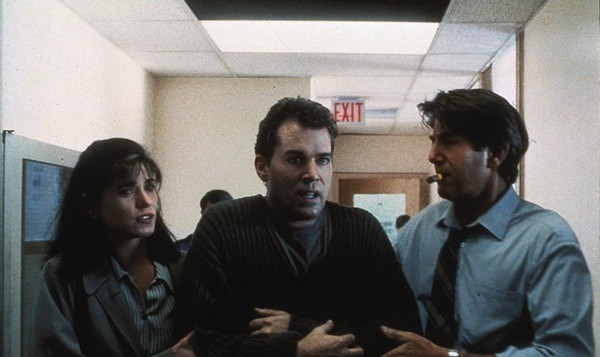 UNFORGETTABLE (1996). The plot of this absurd thriller involves the presence of brain fluid — no small irony, since the makers of this goof could have used some themselves, if only to avoid concocting a movie riddled with so many ridiculous coincidences, narrative implausibilities and downright stupid characters. Ray Liotta plays David Krane, a medical examiner haunted by the murder of his wife. He meets Martha Briggs (Linda Fiorentino), a scientist who has developed a serum which allows a person to experience the memories of another human being, living or dead. Krane injects himself with the fluid, hoping to identify his wife's murderer but discovering that related killings and corruption run deep. It's a far-out narrative — the sort that could lead to something exciting (e.g. Memento, Face/Off) — but the script by Bill Geddie (the longtime producer of The View and numerous Barbara Walters specials, here making his writing debut) is inconsistent even within the dictates of its own plotline. Director John Dahl was coming off the career twin peaks of The Last Seduction and Red Rock West (with one making Roger Ebert's 10 Best list and the other landing on Gene Siskel's 10 Best, both in 1994), but he stumbled badly with this one before rebounding with Rounders and the underrated Joy Ride.

Blu-ray extras include a making-of featurette; crew sound bites; and the theatrical trailer. 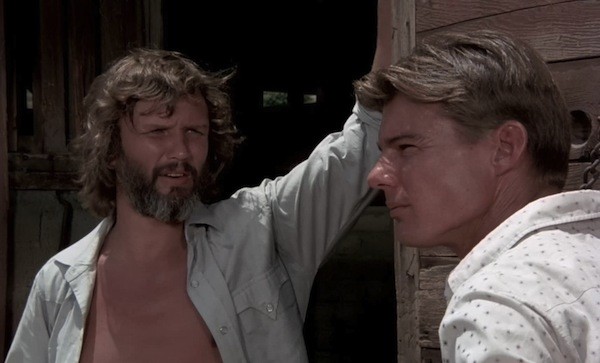 VIGILANTE FORCE (1976). Considering its eye-catching cast and a workable premise, this ranks as a real disappointment, with writer-director George Armitage content to churn out drive-in yahoo fare rather than craft anything with any sort of staying power. The picture opens like a modern-day Western, with a small California community being subjected to all manner of lawlessness after an oil strike brings numerous rowdy rednecks to town. Desperate, the mayor (Brad Dexter) and police chief (Judson Pratt) ask respectable citizen Ben Arnold (Jan-Michael Vincent) to contact his brother Aaron (Kris Kristofferson), the town black sheep as well as a Vietnam vet, and see if he and his friends can restore order to the community. That they do, but they replace the trouble with their own brand of criminal activity, including gambling, robbery and murder. The performances by Kristofferson and especially Vincent are so aloof that it seems like the actors were never even properly introduced, let alone able to convince us that their characters are supposed to be siblings. But the supporting cast is interesting for its trio of talents who would soon hit it huge on television: Victoria Principal (Dallas) as Ben's girlfriend, David Doyle (Charlie's Angels) as the bank manager, and an uncredited Loni Anderson (WKRP in Cincinnati) as a saloon girl named Peaches. Not surprisingly, the best emoting comes from future Broadway superstar Bernadette Peters, cast as an aspiring singer who becomes Aaron's kept woman. The climactic battle between Aaron's thugs and the good townspeople is embarrassing to behold.

Blu-ray extras consist of audio commentary by Armitage and filmmaker Elijah Drenner (director of the documentaries American Grindhouse and That Guy Dick Miller) and the theatrical trailers for Vigilante Force, Defiance and Convoy.