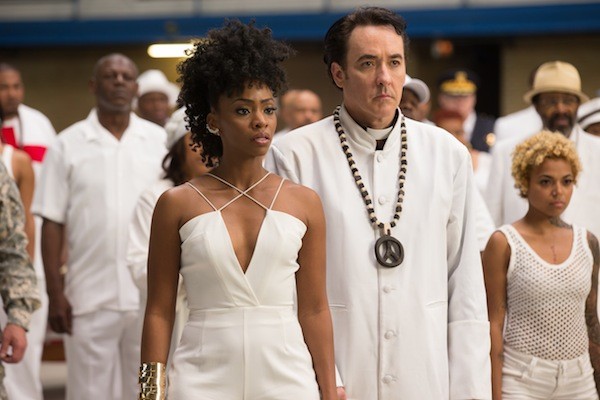 Those are the defining lines of the hour,

Based on Aristophanes' ancient Lysistrata,

It instead examines today's social strata.

Specifically, the poor in Chicago, Illinois,

In a crime zone with no hope and even less joy.

The entire movie is spoken in rhyme,

A risky gamble, but it works all the time.

Teyonah Parris is superb in the primary role,

As a brainy, sexy woman with a definite goal.

Hoping to stop the men from killing each other,

She devises a plan to save every brother.

No more sex from any female in the hood,

If that doesn't stop the deaths, nothing ever could.

The angry gang members all shout, "Fuck that noise,"

But they think of laying down their murderous toys.

It's a powder keg of a film from first frame to last,

Anchored by Lee's fury and a powerhouse cast.

As a priest, John Cusack has a tremendous scene,

Railing against killings both senseless and mean.

While Nick Cannon impresses with his bottled-up rage.

Blaring "Wake Up!" among his omniscient pleas.

Chi-raq is one of the best films of the year.