Scarborough in The Full Monty 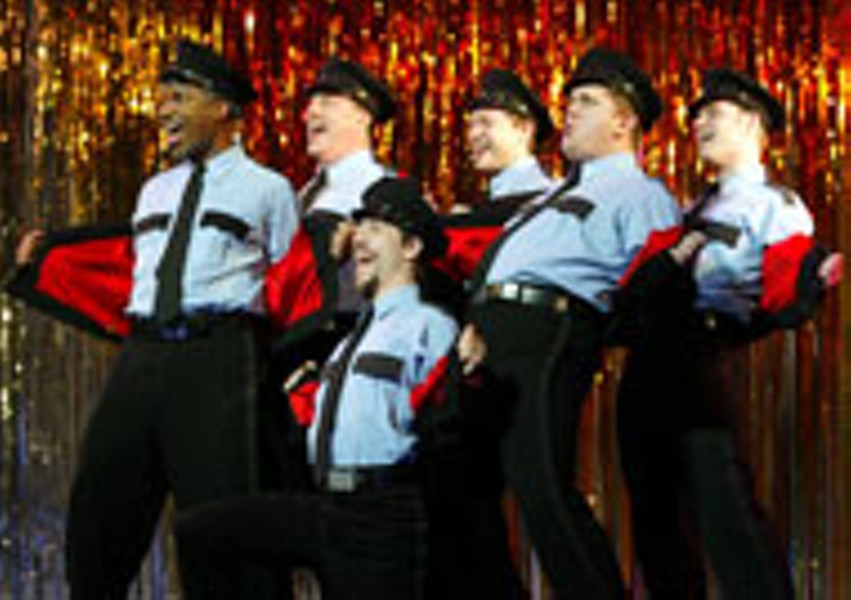 Carol Rosegg (L to R): Troy Scarborough, Patrick Cogan, Eric Thorne (kneeling), Jeremiah Zinger, Joe Coots and Steve DeBruyne in a scene from Broadway's smash hit musical comedy, The Full Monty.
When Troy Scarborough comes to town next week in The Full Monty, he'll be riding into Belk Theater on one of the juiciest musical comedy roles of the last decade. Scarborough, son of former Charlotte City Councilperson Ella Scarborough, plays Noah "Horse" T. Simmons, a linchpin in the story of six laid-off blue collar workers who put together a striptease act to earn desperately needed cash and win back their self-respect. Horse doesn't arrive until late in Act 1, but his song-and-dance, "Big Black Man," is one of Monty's signature showstoppers.

Scarborough saw the show on Broadway, liked it immensely, but didn't come out when auditions for the touring production were announced. After the tour's original Horse was scratched, Scarborough received a call out of the blue -- from the casting director who had seen his work while he was a student at the American Musical & Dramatic Academy.

"I was surprised," Scarborough admits. "I came out of seeing Monty thinking that I would do the role years later. I didn't know it would be two years later. Because I didn't think I was old enough to play the part."

At 30-something years of age, Scarborough estimates he has to age an additional 30 years to make Horse credible. Backstage photos in his costume and makeup might show him looking older than his eminent mom.

While Troy had the inside track to the role, it was the assistant director of the London production who had to be convinced -- and the Broadway dance captain who taught him the steps.

Once he was in the saddle, Scarborough had to ride quickly. When he arrived for his first rehearsal, the rest of the cast had already been working on the show for a month or more, and previews were slated to begin the following week.

With all his training and experience, Scarborough was up to the challenge. Ella's lad has two Masters degrees from Wayne State U and the U of Delaware. He has done classical theater at the Utah Shakespeare Festival, improv comedy at the Second City Comedy Club in Detroit, and musicals -- right here in Charlotte at CP Summer Theatre, back in 1992, when he had feature roles in The Emperor's New Clothes and On the 20th Century.

Perhaps the most notable feature of The Full Monty is the brilliant book by Terrence McNally that successfully transplants the milltown spirit of the 1997 British film from Sheffield, England, to Buffalo, New York. Although the original Broadway production pulled down seven Tony nominations, Monty was trounced by the unprecedented success of The Producers at the 2001 awards.

Coming up empty took the legs out of Monty. After 9/11, Broadway tourism and attendance drooped, and the show was shuttered. Scarborough believes it would still be running if it boasted the same Nathan Lane-Matthew Broderick star power as The Producers.

"It's a really great, hearty American musical," he insists. "If there's ever a possibility of there being a man's-man's musical, which sounds oxymoronic but really isn't, this would be it because it really strikes a chord with the male viewership. Guys who are not traditionally theatergoers, especially not musical theatergoers, can relate to and enjoy the characters and characters' journey. There isn't anything lofty about anything they're trying to do."

No, getting naked in Buffalo isn't lofty. But will the male stripteasers rile Charlotte's notorious morals wardens? Scarborough thinks not.

As the arthritic senior in the striptease sextet, Scarborough has noticed that senior citizens are unexpectedly receptive to The Full Monty. So he doesn't expect his appearance to drive a wedge between himself and his dignified mom. Emphatically, he dismisses the notion of a Scarborough generation gap.

"My mother brought me to the arts," he stresses. "She took me to see my first play. I went to see The Nutcracker Suite when I was three at the Children's Theatre. She was the one that introduced me to [the Teen Life Drama Group] Focus -- she was working with Planned Parenthood at the time. I learned presentation and public speaking by watching and listening to her and having been coached by her. If anything, it was a generational connection. My grandfather was a Baptist minister, my mother is a politician, and in the natural progression of things, I'm an actor."

So did Troy's mom quiz him about the nudity in The Full Monty?

Moving Poets Theatre of Dance has collaborated with The Echo Foundation in producing a tribute to Dr. Bernard Kouchner and the noble enterprise he founded, Doctors Without Borders. Island of Light features impassioned acting from Kevin Campbell, video testimonies of humanitarian refugees produced here in Charlotte, and wondrous live music from a live quartet featuring composer David Crowe and rock hall-of-famer Tom Constanten. The Poets choreography by Till Schmidt-Rimpler is grimmer and grittier than usual, splashed with the sunshine of Mia Cunningham, on loan from NC Dance Theatre.

Sadly the courageous Island ran aground in last week's snowstorm and canceled its opening performances. Make-up performances will take place this weekend at Providence Day School. Call 704-527-6683 for tickets and details.