How four local eccentrics work ghoulishness into their lives

From candy to decorations to costumes, Americans will spend about $8 billion this year on Halloween. That's $8 billion on sugar, plastic and lights, and an outfit worn for one, maybe two, nights. That's the amount billionaire businessman George Soros has given away during his life to charities, which promote humanitarian issues. It's half of North Carolina's annual budget. But hey, when else can you dress like Lady Gaga?

People are obsessed with Halloween, but for different reasons. For some, it's a time to really be themselves. For others, it's a way to escape. Here are some Charlotteans who live and love Halloween. Read on ... if you dare.

Junior Webb hasn't made it to Hollywood yet, but what he creates in his west Charlotte mobile home belongs in a sci-fi blockbuster, or at least a really good episode of Outer Limits.

Webb has lived 44 of his 46 years on the same plot of land by the airport, and worked as a brick mason until the construction industry tanked, forcing him to take odd jobs to make ends meet. A self-described country boy, Webb gives warm, friendly handshakes. Movie posters, photos of his 11-year-old daughter, Sarah, and sketches of monsters and superheroes hang on the walls of his home. But the most interesting decoration rests, at least until Oct. 31, in the corner of his small dining room.

"I'm not sure what to call it. Weird-lookin' alien thing?" Webb suggests, laughing.

On Halloween, he will transform into a one-eyed, multi-headed monster with "hands" — a large knife and silver robotic claw — nearly as tall as the man-sized outfit. From far away, his costume looks like a wild nightmare. But a closer inspection reveals its ingeniousness: The costume is made entirely of mattress foam, appliance parts and painted cardboard, and decorated with details Webb picked up at a dollar store. It took about six months and $160 to make.

Webb's fascination with monsters began when he was a child. His uncle showed him Godzilla — still Webb's favorite movie — and handed him a sketch pad. Webb's own gruesome creatures lived solely in that pad until he saw Star Wars. The film turned him on to movies and special effects. With a Super 8 silent movie camera in hand, he started making his own scary movies starring neighborhood friends. At the same time, he began experimenting with molding clay, latex and rubber. Makeup effects, like black eyes and cuts, started showing up in his movies. When Michael Jackson's Thriller video turned the living dead and other such creatures into pop-culture fodder, Webb, then in his early 20s, started shopping his makeup effects skills to local low-budget, independent horror and sci-fi directors and occasionally joined his uncle, a costume specialist, on set.

"I wanted to see if anyone else made movies like I did," he says.

With the help of friends, who donate old pillows, chicken wire, carpet liner and other seemingly ordinary trash, Webb and his Halloween costumes make hundreds of dollars at local costume competitions. The most he's won in one year is $500, much of which goes to his household bills.

But his first love is still movie makeup. He has worked on a handful of locally filmed horror, monster and slasher films, including Marley's Revenge: The Monster Movie, making severed limbs and gaping, zombie-bite holes in actors' necks on weekends when he's not laying brick or working in a warehouse. Between film jobs, which he admits are harder to come by these days, he takes up side projects like the open-bone fracture he made on someone's arm for a safety-awareness video, or the time he dressed up like a bloody Jesus en route to the cross for a local church's production of the crucifixion. He does what he can, when he can, with whatever he can get his hands on.

"What you do, you can do with nothing," he says. (Ana McKenzie)

Darrell Lindsay's signature look for Halloween isn't the end-all, be-all of horrific. He neither paints his face with "bloody" makeup nor spends loads of money on grand costumes. Instead, he sports a plain mask, à la Hannibal Lecter from The Silence of the Lambs.

"It makes you focus on the eyes," Lindsay says. "The most simple thing can really creep a person out."

Lindsay doesn't seem like the type to get excited about Halloween. A retired U.S. Army soldier, for 20 years his life was about following and giving orders — staying inside a neat little box. Now that he's out of the military, Lindsay has grown more attuned to what he calls his "dark side." In 2009, he found a hearse in a junkyard, got it running in less than a year and now drives it for fun. He named it "Hoss," for the burly character on the TV western Bonanza.

With 72,000 miles and few body changes, the 1974 Cadillac Fleetwood Superior (which Lindsay purchased for $850) is about as authentic — and chill-inducing — as a death carriage from the '70s can get.

"The original curtains are in place, but they're so worn, faded and tattered that it looks like they've seen action, I guess you could say," Lindsay says. "The motor's been worked on, but the block, transmission, body, they're all original." He primered the body with the intent to paint it, "but it's starting to rust back over again, and I like the look."

Lindsay got into the more gruesome side of life as a kid. Instead of attending an after-school program as instructed by his mother, he would cross the street to hang out at his cousin's funeral home on Statesville Avenue. He was only 7 when he saw his first dead body.

"It didn't warp me any; it really helped me appreciate the work that goes on in a funeral home," Lindsay says.

What ultimately did have an effect on him, though, was his deployment to Iraq.

"When we came back, we had to go through counseling, and I found out I had some anger management issues. So my counselor told me to harness that energy somewhere else," he says. That's when he became obsessed with cars and grew more comfortable with his darker side.

Lindsay and the other 11 members of the Carolina Coffin Cruisers, a hearse club, make appearances at the Charlotte restaurant Tilted Kilt, a Zombie Walk in Salisbury, Woods of Terror (a haunted house in Greensboro), and a few local house parties throughout the year. His second, smaller hearse — yes, the man owns two — is named Sally; it's a 1970 Cadillac. "Next to Hoss, it looks like it could be his girlfriend," Lindsay says.

That kind of lightheartedness makes you realize you can't put Lindsay into just one box. Yes, he likes to drive his hearse to the grocery store, and sure, he has an affinity for grim reapers — he has a tattoo of one on his left forearm. But Lindsay is anything but frightening.

At least, until he puts his mask on. (Kimberly Lawson) 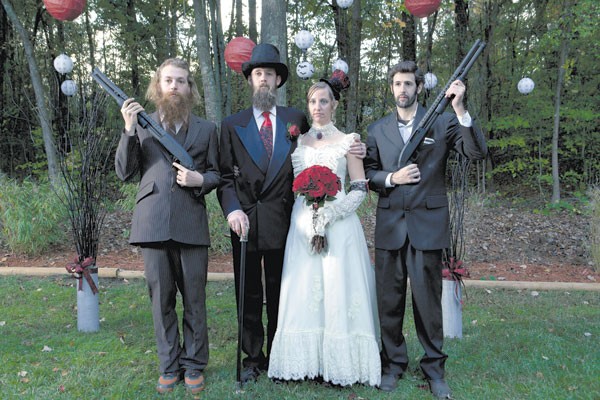 Rachael and Neal Harper weren't surprised when their flower girl was too scared to perform her duties at their wedding. Her job was to throw candy — rather than flowers — from a plastic pumpkin bucket. The guests, most of whom sported scary costumes for the Halloween-themed ceremony, petrified the toddler.

"I've always planned to have my wedding in October because it's my favorite time of year," says Rachael, a photographer, yoga instructor and former bass player for the Charlotte-area rock band Angwish. She married Neal Harper, a guitarist for another local band, 2013 Wolves, and former owner of Charlotte's historic punk venue the Milestone, two years ago on Halloween.

Neal wasn't enthusiastic about the wedding-planning process. Neither was Rachael. They just knew they didn't want anything extravagant. It wasn't until she suggested a Halloween-themed observance that they became invested in the process. Rather than a showy formal affair, the couple decided on a low-key gathering with friends and family in a fun, creative atmosphere that spoke to their laid-back personalities as artists.

When Rachael shared her thoughts about a Halloween-themed wedding with family and friends, most approved.

"Everybody was excited, but my mom did ask me, 'Are you sure you want to do that?'"

She revamped her mother's wedding dress, a long, traditional gown from the '70s, by removing part of the lacy neckline. It left space for a red and black locket with pictures of her and Neal's parents on their wedding days.

"It's kind of rare these days that both people's parents are still together, so that was something I thought I should pay tribute to," she says.

For the wedding, Rachael accessorized with a small black and red top hat with matching red Fluevog boots. Neal wore a '20s-style black tux with a red tie and black top hat.

The guests' costumes skewed even more adventurous, from vampire attire to highly detailed, thought-out (or not) combinations: big, husky guys dressed as Lady Gaga, the Tooth Fairy and post-wreck Dale Earnhardt Sr. None looked out of place. As for the decorations for the reception? Cheesy Halloween, all the way. Best of all, the wedding only cost about $3,000.

"My dad was surprised," Rachael says. "He still calls and tells me, 'I can't believe you guys pulled that off so well.'" (Anita Overcash)

Drew Badger was only 10 when he inadvertently gave his first haunted house consultation, in 1977. His elementary school was holding its annual Halloween carnival, which included the "Tunnel of Terror." The "really lame attraction," Badger recalls, was comprised of taped-together refrigerator boxes and witches and ghosts made by first- and second-graders. So, Badger and his friend decided to fix it up.

"I cut a hole in one of the boxes, and my buddy got a bowl of ketchup," Badger says. "We smeared it on our arms and when the next group — a group of fifth-grade girls — got to the hole, we reached through and screamed and yelled. They screamed and yelled and got outta there. Within five minutes, we had a line out the door. Something must have clicked in me at that point."

These days, Badger is the CEO of Rabid Badger Haunt Consulting. He also spends a good bit of his free time doing voiceover work for haunted attractions, organizes Charlotte's annual Zombie Walk and hosts the podcast at BigScaryShow.com.

"Halloween has always been my favorite holiday ever," Badger, 45, says. Soon after that first elementary school experience, he and his friends started to "map out the neighborhoods with walkie-talkies for trick-or-treating, to see who had the best candy and maximize where we were going."

As a haunted attraction consultant, Badger coaches actors who perform the same routine countless times a night on ways to stay upbeat and in character. He also consults with attraction owners on how to handle trouble when it arises.

As for his haunted ideas, Badger's inspiration comes from his own imagination rather than from TV or movie ghouls. "I'm twisted enough that I don't need to look at a Freddy or Jason."

Badger, who worked at Scarowinds for seven years, attends haunted attraction conventions across North America and offers consultations wherever his services are needed — including setting up a haunt on the Battleship North Carolina in Wilmington. His advice focuses on what does or doesn't scare people today, compared with 50 years ago. "Someone pointing a gun at you in a haunted attraction won't scare you, because people see it on the news every day," he says. "If someone comes after you with a knife, a machete or a sledgehammer, it's gonna terrify you a whole lot more."

While he's done four haunted attraction consultations in North Carolina this year — "I'll pop in at some point to see if they took my advice" — don't expect him to build his own haunted house any time soon. "I don't build haunts," he says. "I make haunts better. That's what I do." (Jeff Hahne)