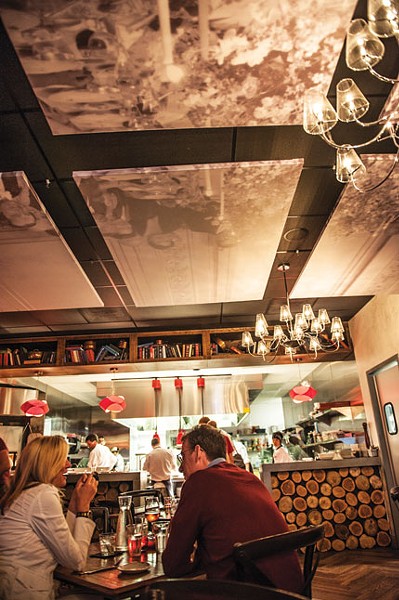 The Charlotte restaurant scene is on the move. Beginning in late summer 2013, the culinary scene has exploded like a pubescent boy on Wheaties. This kind of growth has not been seen since the corporate steakhouse invasion of the late 1990s and early 2000s that signaled Charlotte's debut as a bona fide city.

A semi-resurrected economy, residential boom and evolution of taste fuel the new movement that is gaining vibrancy by the minute. From veteran chefs and newcomers to an insurgence of artisans and craft brewers, a new throng of establishments has landed, and more are on the way. More than that, Charlotte's growing population seems hungry for it.

For an illustration of this monumental growth spurt, let's look at the beginning of this year. During the months of January and February, five new restaurants opened their doors, beginning with veteran chef Bruce Moffett's third restaurant concept, Stagioni, followed by the Asbury (inside the space formerly occupied by Harvest Moon Grille), Lumiere in Myers Park, Heirloom Restaurant in the Coulwood neighborhood and Fahrenheit in Uptown. A closer look at these restaurants will tell you everything you need to know about what's happening right now.

With the economy leveling out, veteran chefs are finding new ways to express themselves. Take Lumiere, for instance. The second concept from restaurateur Matthew Pera and chef Tom Condron serves French food with a modern twist, a markedly different concept from their gastropub The Liberty, which opened in 2009 serving pub fare at post-recession prices. The opening of Lumiere restored something that had all but disappeared in Charlotte when the economy tanked: grand classical cuisine.

"People are tired of being conservative," Warford says. "They are ready for something new."

L.A. transplant Alesha Vanata agrees. In July, she brought a new breakfast and lunch concept, dubbed Little Spoon, to the Myers Park neighborhood. "There's a wealth of opportunity for hospitality to come in and establish roots," says Vanata. "Charlotte is a young, growing city where you can still help shape its growth."

With bright, young talents taking the helm of some of Charlotte's newest restaurants, that influence is happening already. For example, Chris Coleman, 30, assumed the position of executive chef at The Asbury inside the Dunhill Hotel, joining the mass influx of openings at the beginning of the year with his modern Southern concept. Coleman is turning out some of the most beautifully composed plates in the city and expertly mixing the old with the new. You will find his maw maw's recipe for cast iron biscuits on the menu, right next to an heirloom tomato sandwich with basil ice cream in the appetizer section.

Clark Barlowe is another young chef making moves. A graduate of Johnson & Wales University who left to spread his wings abroad, Barlowe returned to open his farm-driven concept, Heirloom, in February. He believes the shift in the culinary climate is the result of a new guard of Charlotte diners.

"There's a new, younger customer base in the city with disposable income," he says.

A 2011 study by the Pew Research Center confirms Barlowe's assertion. That study found that in Uptown and South End alone, the fastest growing population is Generation Y, people ages 20-34 years old. And in these neighborhoods, 57 percent of people make a household income of $50,000 or more.

An uptick in disposable income means that decidedly metropolitan spots like Baku, a Japanese robata-style restaurant and late-night cocktail lounge in SouthPark, and Fahrenheit, the fashionable rooftop restaurant with its own celebrity chef (Cleveland transplant chef Rocco Whalen), are finding a place in the city with well-heeled diners eager for new experiences.

Farm-to-table concepts are growing exponentially, too. Since last summer when Tim Groody opened Fork! in Cornelius, chef-driven restaurants that support local producers are on the rise. Chef Paul Verica's "farmer-driven" restaurant Heritage in Waxhaw followed suit in November 2013, along with The Asbury, whose executive chef Coleman got a nod in a June 2014 USA Today article on notable North Carolina restaurants.

Established restaurants are expanding as well. Luna's Living Kitchen got a face-lift and moved into a larger space in South End this past April, and chef Luca Annunziata of Passion8 Bistro in Fort Mill plans to relocate to a larger space in Elizabeth this winter.

On East Boulevard, Summit Room and the MayoBird opened in the defunct Brueggers Bagel and Caribou coffee location, and an oyster concept called Rock Salt is slated to open in the Park Road Shopping area this fall. Breweries are bubbling, too: Sycamore Brewing is coming to South End in a few months, and Free Range Brewing is moving into NoDa soon.

The culinary path is broadening, palates are becoming more curious and new concepts, not yet public, are waiting in the wings. What an exciting time to live in Charlotte.