Ya Girl Nikki in the studio at Power 98, where she'll be collecting books in the coming months. (Photo by Ryan Pitkin)

It's a recent Friday night in the Power 98 studios and Nikki Davis, known on the radio as Ya Girl Nikki, is keeping her energy levels high against all odds.

The previous night, Davis had worked her normal shift from 7 p.m. to midnight, and then headed straight to an afterparty for the Jay-Z concert that she had missed because of her job. The party went until 3 a.m., but Davis is back at it on Friday, joking around with DJ Buttafingaz on the air between breaks in his State of Emergency mix, and keeping her thousands of listeners hype throughout the night.

One would think Davis might have relaxed earlier in the day, but that's not her style. Despite her late night, Davis had spent the afternoon at McClintock Middle School, where she tutors and mentors one student, and hangs out with as many as she can, whenever she can. She admits she was tired, but it was the birthday of one of the students, so Davis decided to surprise her.

Helping kids is a passion that's always been important to Davis, one the city can be thankful she spends some of her seemingly endless energy on. When she moved to Charlotte from Fayetteville in March, one of the first things she did was find out the names and locations of 15 of the city's most troubled schools, and then spent two days driving around to each of them, meeting kids and observing their learning environments.

Now Davis is stepping up her efforts and becoming proactive in the fight to battle illiteracy in Charlotte-Mecklenburg Schools. On November 1, she partnered with the local chapter of the literacy tutoring organization Reading Partners to launch the Level Up and Learn book drive.

By next March, Davis hopes to provide 500 books to the seven Title I schools that Reading Partners works with in Charlotte, and hopefully inspire a new wave of volunteers to help kids who are behind in reading.

"I just really wanted to kind of give back in a way, and I know the kids need this knowledge," Davis tells me as Buttafingaz spins music in the adjacent studio. "I know they don't read when they go home. Most of them get home, they get on their phones, and that's all they do."

That might be one reason reading proficiency levels are so low all around the country. In Charlotte, just 39 percent of fourth grade children read at grade level, according to the biennial National Assessment of Educational Progress results from 2015. When you look at African-American male students, the number is nearly cut in half, with just one out of five students reading at grade level.

While the numbers have gone up slightly in the last 12 years — 31 percent were at grade level when the NAEP first came to Charlotte in 2003 — it's not improving fast enough for Munro Richardson, executive director at Read Charlotte, an initiative that aims to have 80 percent of fourth graders reading at grade level by 2025.

"We're moving in the right direction, but not fast enough to get thousands more kids reading well," Richardson says. "The larger conversation about social mobility and economic mobility can't happen if students are not literate."

In the two and a half years since Read Charlotte launched, Richardson and his team have been working to make sure kids are more prepared by the time they reach kindergarten, which he says will set them on the right path to stay at the skill level where they need to be.

Richardson says he's visited schools where the majority of an incoming kindergarten class cannot name 10 letters, and sometimes are unsure of their own name, let alone how to spell it. 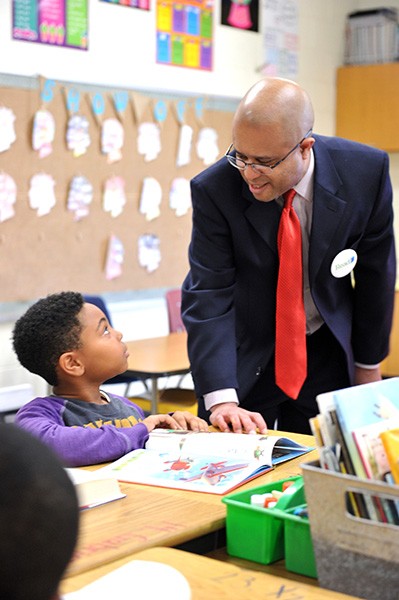 "Letter knowledge is one of the biggest cognitive predictors of how well kids will do at reading in the first few years," Richardson says. "All students have to run the same race to third-grade proficiency, but some of them are starting 100 yards back. Some kids are coming in, they've been read to, they know their alphabet, they know how to write letters, write their name. Some of them are already starting to read. And you've got other kids that don't know how to hold a book. They've never been read to, they don't know the alphabet, they don't know how to write their name, and CMS is being asked to teach all of these kids and move them all forward."

"The reality is, if you are a principal or a teacher in a school where large numbers of kids are coming in not ready to learn to read in kindergarten, then you're work is a lot harder than if you're at another school where most of the kids come in and they know their alphabet, they're familiar with whether a book is upside down or not, and they know that it goes left to right," he says.

But what about the thousands of kids who are already past that point? After all, there are plenty of kids who already started what Richardson calls "the race to third-grade proficiency" from 100 yards back.

Since launching in 2016, Reading Partners has sent its volunteers to seven Title I schools in Charlotte, six of which are in CMS, for an hour every week to help kids who have fallen behind in reading proficiency. This school year, Reading Partners plans to help around 300 students ranging from kindergarten to fourth grade, with the help of about 400 volunteers.

The first four years of a students' schooling are crucial, as third grade is when kids begin to transition from learning to read to reading to learn, as Richardson puts it.

Kids not reading at grade level are four times more likely to drop out of high school later on down the road. Conversely, kids who read well by the end of third grade have a 90 percent chance of finishing high school successfully.

Those who fall behind often become discouraged with reading, and it becomes harder to get them on track. Reading Partners works with kids who are anywhere from one month to two and a half years behind.

During the 2016-17 school year 78 percent of kids that Reading Partners worked with between kindergarten and second grade were able to get to where they should be in reading proficiency by the end of the year.

"These students just need extra support," says Helen Kimbrough, program manager at Reading Partners. "They just need extra help. It's hard to get all of the educational things that you need in a classroom with 25 kids, especially when you don't come in on the same footing as other kids. If you start out behind, you will probably end up continuing to be behind just because of the pace of the classroom structure."

For Kimbrough, who's also a successful children's author, the job is personal. She's the mother of two boys, one of whom is a voracious reader, while the other was reluctant.

"What I try to convey when we are doing volunteer orientations or speaking out to different communities, is that sometimes it could be a five-year process to get your son or daughter on track," Kimbrough says. "A lot of it is trying to find out what books interest them. My voracious reader was a methodical and statistical learner, but my youngest was more experiential. He was all about taste, touch, see, smell. So if I found a book that was gory in detail on the cover, he would gravitate towards it."

Finding books kids can relate to is a main goal for Davis' book drive. In the countless hours she's spent in some of Charlotte's more troubled schools over the last eight months, she's been alarmed at the curriculum she's seen being taught. 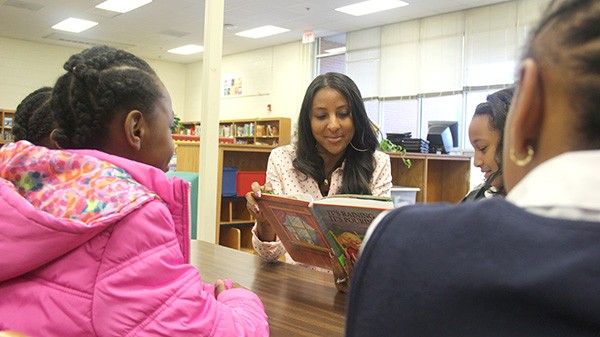 She recalled meeting one little boy who lives with his grandmother because his father is in prison.

"He's in class reading Tom Sawyer books, and he's not engaged," she says. "That's not going to help him. How is Tom Sawyer going to help this kid whose dad is in prison, and mom is not in the picture, and he lives with his grandmother who probably has no idea about the younger generation, but she's trying her best? So I really want books that are suitable for these kids."

Davis, who got into reading through her childhood obsession with Archie comics, wants to see kids reading things they can relate to.

"I want reading and learning to be fun. I'm going to be honest, when I sit in these classes, I'm bored sometimes. It's just the teacher talking and 'Do this, do that,' and it's no fun in these classes anymore," Davis says. "Maybe if I can get people to donate some good books, some fun books, I can get the kids back into reading and really wanting to learn again."

It's not only relatable content that's key, but relatable role models. Kimbrough has been pushing to recruit more men, and black men in particular, to become volunteers.

Kimbrough's sons sometimes visit Reading Partners centers, the spaces the organization is given in each of its partnering schools, and she says she can see a noticeable difference when a man is there reading with the kids. "I'm a mom, so they're like, 'OK, she talks like a mom. She's just mom,'" Kimbrough says. "But guys come in and they're like, 'Who is your favorite team?' I'm not talking about stuff like that. The kids really like it."

Davis, 33, has made it her goal to recruit more folks her age or younger to become Reading Partners volunteers. As she pointed out, 500 books would be great, but they won't mean much if nobody's there to get kids excited to read them.

"It's more about spending time with the kids. They seek attention. They need it. A lot of kids don't get enough attention at home because they have so many brothers and sisters and stuff," Davis says.

She quickly throws on her head phones and raises her voice more than a few octaves to speak to her listeners live about an upcoming turkey drive and tell DJ Buttafingaz that he was on fire the night before. When she takes off the headphones after about a minute of yelling excitedly into the mic, she doesn't miss a beat on our conversation.

"Kids really like when you read to them and you act out what's happening," Davis continues. "I want to involve high schoolers. I think it would be good for kids to see other kids, maybe even involve fifth and six graders to come in, because the young kids look up to them."

Another struggle has been finding more Spanish-speaking volunteers to help the ever-growing Latinx population in the schools Reading Partners serves. This year the organization brought on two Spanish-speakers to work at centers where the most students learn English as a Second Language.

This is an issue Davis noticed when she visited Martin Luther King, Jr. Middle School, where she was told the Latinx population had surpassed 50 percent.

As complex and overwhelming as the reading problem may seem, Richardson is confident that by strengthening CMS's Pre-K program and working with groups such as Reading Partners, Read Charlotte can realistically meet its goal of reaching 80 percent proficiency among fourth grade students by 2025.

"The good news is that there's nothing I've described to you that is rocket science," he tells me. "But it's going to take a community solution to turn this around. CMS can't do it by itself."

Sometimes all you need is a partner.