Charlotte Storytellers is all about that Wordplay

Photos by Jeff Hahne No talking sticks needed in this circle of storytellers.

I'm growling. No, screeching. Actually, I'm not sure what I'm doing. Strange sounds are definitely coming out of me, and my arms and legs are moving to imitate someone's impression of a monster. I add my own twist and give someone else the opportunity to jump into the center of this strange, tribal-like circle of folks who are acting like even bigger fools than me. Jump in. "Urggghhhhhh. I'm a monster. Ieeeeeeeee." Jump out.

I've joined a group of people in a parking lot off Hawthorne Lane between NoDa and Plaza Midwood. We're visible from the road, and I'm hoping no one I know drives by and sees me. Yogis headed to the nearby fitness studio look on suspiciously, probably wondering what was in the Kool-Aid we'd drunk. But there was no substance abuse to this chaos. It's a Monday evening, and I'm imitating a make-believe creature, waving my hands in the air — like I just don't care.

The people I'm playing monster with are new and veteran members of the Charlotte Storytellers, which first formed in February. They're funny, smart and creative — and maybe a little persuasive, as they've convinced me to loosen up with them before we make our way back inside Hackerspace for story time.

Charlotte Storytellers is a grassroots gathering of locals who make their craft about entertainment as much as it is about sanctuary. For them, storytelling is an empowering means of releasing innermost thoughts. It's also an art form that requires weekly pruning.

This was the first meeting since Charlotte Storytellers' StorySlam on April 18 at SEEDs on 36th Street. That show kicked off with a tale by Nate Wardwell, 22, schooling the audience on the dangers of jalapeños, especially the effect its juice has when it comes in contact with skin — particularly skin located ... well, you know, down there.

Charlotte Storytellers is the brainchild of two Brown University grads, Ramya Mahalingam and Nora Orton. Orton, 23, was part of a similar group called Brown Storytellers during her time in college. After arriving to the Queen City in 2014, she and Mahalingam — who weren't actually friends during their time at Brown — met and began contemplating the idea to start a similar group in Charlotte.

The pair teamed up with Heather Bartlett, a 29-year-old with a background in theater and education; she's also a master at making faces and playing games that pull people out of their shells, which is helpful if you're striving to deliver a compelling story. At the Monday night meeting, before running around like monsters, Bartlett led calisthenic warm-up activities — we stretched, touched our toes and shook our arms and legs in a fast countdown from 10.

FOR THE GROUP'S debut performance at SEEDs, six members took the mic. Couches and pillows cushioned listeners who were encouraged to blow bubbles whenever they heard something that resonated with them. The warehouse space, home to Charlotte Community Radio, was decked out with large cloth sheets and string lighting that created an intimate vibe for the crowd of around 60 who ranged in race, ethnicity and age. The Facebook event invite jokingly encouraged attendees to wear pajamas, but seriously asked them to bring their own pillows so that there was enough to go around. For concessions? Milk and cookies (Oreos, to be exact) — of course — offer comfort.

"We talk a lot about safe space and basically the idea of an area where you can be whoever, where you can say things and feel things and it's OK and accepted and encouraged. So we're trying to make that space," said Orton, in an interview before the show.

"People suck," Coléa Henderson, 27, said with varying degrees of cynicism between lines that highlighted her downfalls with humanity. Through the changing rhythms of her monologue, Henderson offered the audience her emotions to analyze. I could relate, so I dipped my bubble stick in the small container of chemicals, pulled it out and blew.

When Chris Sirico, 27, a blogger with a love for podcasts, took the mic, he brought a journal from his teenage years along with him. He read about the first time he got high.

"I was such a different person then," he tells me at Hackerspace before the weekly meeting is about to start. "It was a struggle to find that voice because it's me, but it's also not me. I identify with a lot of what I was writing and a lot of it was just very introspective, philosophical and so some of it doesn't come across for performance. So it was kind of boiling it down to those moments when I could point to my younger self and laugh and share that with the audience."

Narrative can be a window to our souls, documenting who we are or were at any given point of time. In a sense, the preservation-like process can allow us to reflect and grow in ways we never saw possible.

DURING THE MONDAY night meeting, 11 of us sit together in the small space, with a backdrop of books looming on a nearby shelf. Having already allowed my monster to fly hard, I choose to listen instead of participate in the wordplay that was to follow. 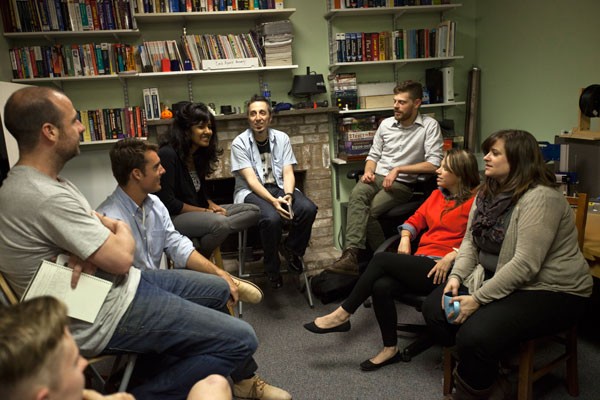 The group plays a quick game that resembles improv, where topics are suggested for the purpose of creating three-sentence stories. Whatever topics spring to mind — however ridiculous, raunchy or random (truffle butter, for example) — are written on a whiteboard and then divvied out.

Listening to these energetic people critique one another's stories is as captivating as it is informative. They remind each other about the importance of pacing — one of the elements of narrative that matters most, so as not to lose or disengage listeners. At one point, Mahalingam sits almost on the edge of her seat, her eyes growing wide in child-like wonder as she listens to someone share a story about bicycle crashes.

There's a sense of nostalgia for elementary school story-times that resonates through these very adult (R-rated, even), yet informal workshops. But in many ways, these storytelling sessions force us to dig deeper. They are as therapeutic as they are inspiring, laying the foundation for a new form of self-expression.

In a separate interview, Bartlett, the master at warm-up exercises, tells me she has used storytelling as a vehicle to help others overcome trauma. She's worked with children from abusive backgrounds to create personal monologues and has also used the technique for abused teens and folks suffering from substance abuse. "I continued to use theater as a means of building these relationships, and I was repeatedly amazed by the healing power of narrative."

"Our lives are broken by some stories and healed by others. Just as any good story our lives are marked with rising action, climax, catastrophe, and catharsis," says Bartlett, who's enrolled in UNC-Charlotte's Master of Social Work Program. "So Charlotte Storytellers challenges us to dig deep into those stories, be vulnerable, find healing and learn to love the story we have been given."

Henderson, the storyteller who's dealt with some sucky people in her life, believes storytelling has helped her to see the beauty in her own life. "It's made me look at the different situations in my life as an experience to be lived instead of a 'good' or 'bad' thing to deal with," she says. "Sharing my story has been a way for me to feel as though I matter in my own life. It's taught me to take every experience in stride, but it could make a pretty good story one day."

Storytelling is also a rewarding experience for listeners. Any vegetarian could probably identify with Mahalingam's horror stories of being a plant-eater in the South. Originally from Dubai, Mahalingam ranted at Saturday night's show about misinformed wait staff: a dish with chicken stock is not at all vegetarian.

Whether humorous, serious or experimental in nature, stories serve a purpose.

"Listening to someone else's story, you feel like you are being invited into a part of their lives," Mahalingam says. "You kind of understand them a lot better and telling a story you feel like you're exposing your identity and laying yourself out there: 'This is me. This is what I am.'"

A couple hours after jumping into a circle of strangers, I exit Hackerspace, feeling like I've tamed my inner monster. It's calm, nourished and inspired from hearing the members of Charlotte Storytellers share their experiences in a casual, comfortable and sometimes quirky way. I feel privileged in getting to tell their story, but I also feel hungry. That hunger can only be satisfied with one thing: more stories.