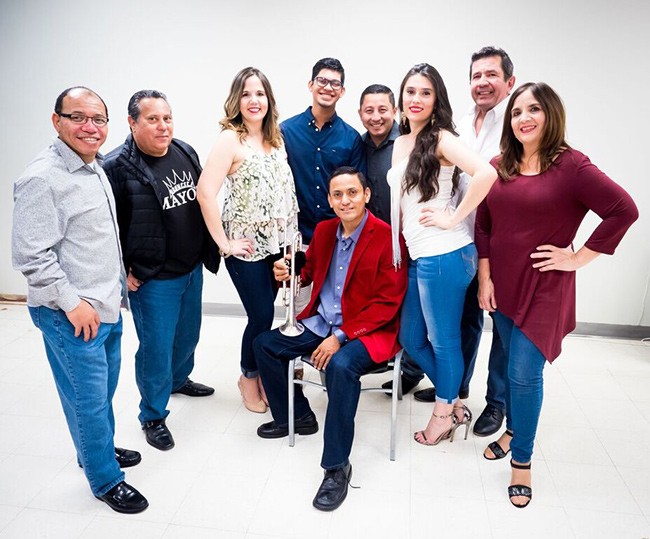 The first thing Helder Serralde quickly realized when he arrived in Charlotte from Mexico City in 2006 was that it was going to be hard to find steady work as a trumpet player. Serralde, 42, is the leader of the city's premier salsa group Orquesta Mayor, but the early years here were not easy ones.

Mexico's culture encourages parties and celebrations, and there, Serralde was never without a gig. "There was always a party in Mexico," he says. "Here — not so much."

Settling into the still-developing town of Huntersville, Serralde was met with farms and churches and, well... more farms and more churches. "Now you go there and you see hospitals and shopping centers but then," he remembers with a chuckle, "it was a field and a field and a field."

The transition was rough. Picking up the trumpet at 17, Serralde had never been out of work in Mexico, working full time in musical outfits like Los Angeles Azules (The Blue Angels), the cumbia group in Mexico in which he had cut his teeth. Now in the United States, he was going to have to be a little more enterprising.

Serralde is sitting at La Revolución, a Mexican restaurant in the Music Factory just across from Creative Loafing's headquarters, to talk about the origins of his group Orquesta Mayor, and the band's upcoming debut album De Mil Manéras (By A Thousand Ways). Serralde is friendly, focused and brimming with energy, constantly getting text messages from his band members, working out scheduling issues and gig details. If you think coordinating a four-piece rock band is hard, try keeping 12 members of a salsa group on the same page. But Serralde insists that as tough as it is, the payoff is well worth it.

The fruits of his labor are evident. Orquesta Mayor is now in it's twelfth year of blowing the roofs off of music halls and clubs all around the Queen City, and the band will celebrate the release of its debut album at the Midwood International and Cultural Center on Central Avenue on Saturday, June 2. The show is part of the Latin American Coalition's third annual Carribean celebration Ritmo y Sabor. Other features at the event include a performance by the dance group Bachata Flow, free salsa dance lessons and delicious authentic Latin American cuisine. The event, from 5 to 11 p.m., is free to the public.

"I was backstage talking with Jose Luis Pardo of [the Venezuelan Latin alternative band] Los Amigos Invisibles fame," Arreaza remembers. "I asked him, 'What do you think about Ismael?' He answered, 'He is awesome, but I'm most impressed with his band!' It felt so good to say that the band was 100 percent local talent."

Orquesta Mayor was born out of dire necessity. In the then-burgeoning Charlotte Latinx community of the early aughts, there was a need for a band that could import the soundtrack to Latin lives into the Carolinas. Once Serralde noticed the vaccuum here, the trumpet player immediately put his mind to fixing things.

"We created Orquesta Mayor because there was nothing like it here," Serralde says. "We were the first."

The 12-piece powerhouse boasts members who came to the U.S. from across Central America and its Carribean neighbors. The group's four singers hail from Colombia, Peru, Ecuador and Puerto Rico. Colombian Laura Villamil is the go-to singer for romantic ballads, while the two male singers, Javier Mendoza and Tyrone Marquez, step to the mic for the harder-hitting tropical numbers. The fourth singer, Puerto Rican Viviana Donate, is the versatile wild card on stage, capable of holding her own with any style.

The group's quicksilver arrangements of salsa standards such as Sentimientos Encondtrados" and "Te Hice Mal" are bona fide hits with their fans, and Serralde gets help with the arrangements from three composer/arrangers he communicates with by internet and phone. Roald Quiroz is from Venezuela, while Cuban-born Pedro Jesus lives in Miami. Puerto Rican Rafaél Torres rounds out the trio of arrangers.

Serralde says he pens the arrangements initially, but relies on the other three men to tell him what works and what doesn't.

"They're great for telling me, 'Take this out' or 'Put another hit right there,'" Serralde says. 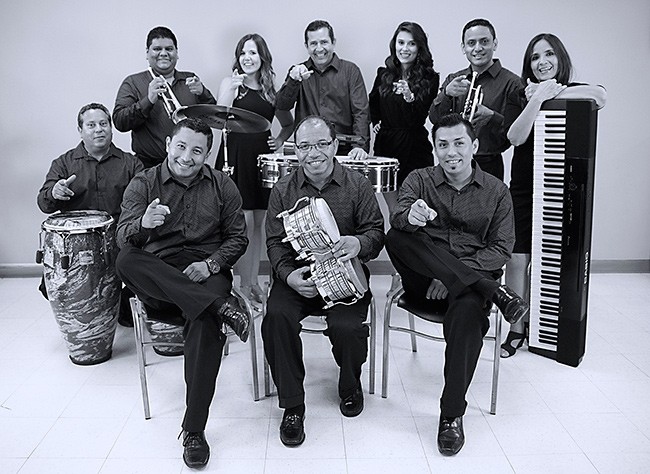 Orquesta Mayor's first two years were "super deficil" (very difficult), Serralde says in Spanish, referring to getting gigs. But these days, he adds, the band is in steady demand.

"In the summer, we're working every weekend," Serralde says. "And as the weather starts cooling off — I'd say from Thanksgiving 'til around March — we play more private events." At the 2017 Puerto Rican celebration at Symphony Park last August, Orquesta Mayor shared the bill with the legendary Grand Combo of Puerto Rico — and killed it in front of a record crowd of 25,000 people. And now, with summer kicking into gear again, Orquesta Mayor is back in its major stride, playing festivals such as Ritmo y Sabor.

Of course, the economics of playing music for a living are tough, and Serralde, along with all the other members of the group, juggle their band commitments with day jobs and teaching gigs. But Serralde is confident the days are fast approaching when Orquesta Mayor may fulfill his dream of being a full-time musician again. The band is regularly asked to play in Asheville, and has expanded to stops in Georgia, Tennessee and South Carolina.

The group recorded De Mil Maneras during the first three months of 2018, at Tropic Culture Studio in Cornelius. The album was engineered and mastered by Jorge Espinosa, whose credits include projects with R&B singer Ronnie Wright and hip-hop artists Sip Wilson and ELU. Serralde says the experience with Espinosa was as good as it gets. "[Jorge]...is a monster...the absolute best," Serralde says.

Arreaza, who also plays guitar in the local Latinx band UltimaNota, guests on one track and remembers it fondly. "It was an honor to participate in their album," Arreaza says. "I love the song, 'Para Volver Amar,' and can't wait for people to hear it. We all should feel proud and lucky to have a band like Orquesta Mayor in Charlotte."

Serralde intends to promote De Mil Maneras for a few months and then return to Tropic Culture later this year for another session. "We have more than enough material for another album and the fans are very eager to have it," he says.

In addition to Orquesta Mayor's upcoming domestic tour dates, the band is in negotiations with Mexican recording artist Fred Huerta to join him on tour in Mexico, Colombia and points in between early next year. It would be the group's first international dates, and a homecoming back to Serralde's Mexican roots.

After 12 years of hard work and some major obstacles, things are starting to look up for Serralde and Orquesta Mayor. In an era dominated by conflict and fractured communities, the Charlotte band is a reminder that the world is a much smaller place than xenophobes would have us believe, and that music can be the thing that proves we have more in common than not — not to mention that we all like to dance.

To Helder Serralde, that's what it's always been all about — the rhythm, the party, the heart and the soul.