Octavia Moore was in fifth grade when she had her first major musical epiphany. Her class had taken a field trip to see the Charlotte Symphony Orchestra, and the preteen's mind was forever blown.

"When I felt that wall of sound vibrating through my body and the beautiful melodies coming together, it really made a strong impact on me," Moore remembers. "I was ready to make music."

These days, Moore makes music in numerous ways. In addition to writing about it under the name Kia Moore, and serving as creative director of Hip Hop University, she's founder and director of a new project called Hip Hop Orchestrated. Every Saturday from 11 a.m. to 1 p.m., in a modest house in west Charlotte, you'll find Moore with a group of musicians from a variety of backgrounds — rap, classical, jazz, even a veteran of marching bands. Like most groups, the musicians work up new material and forge connections. What makes Hip Hop Orchestrated's gathering different from other jam sessions, Moore says, is their goal. Hip Hop Orchestrated — H2O, for short — works to bring about social change through music, one player and listener at a time. 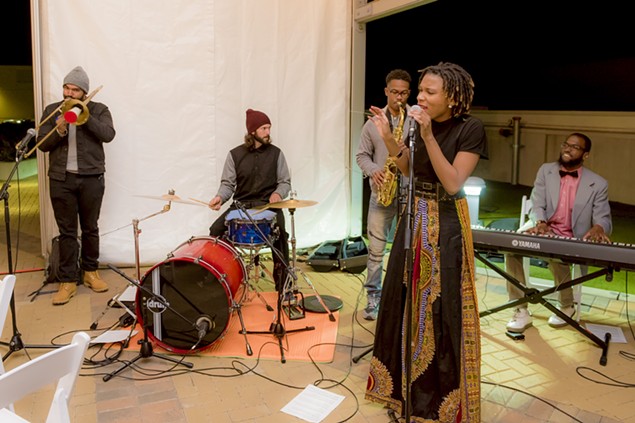 Moore, 32, is confident about music's transformative power, because she's experienced it herself. She and her sister Kellee grew up in Charlotte surrounded by music. "We were record collectors and crate diggers," Moore says. "Our house was filled with stacks upon stacks of vinyl."

Octavia and Kellee would wage friendly turntable battles from room to room in the house. "There was a stereo in the front room and one in our parent's room. We'd grab control of both stereos and play songs back and forth, enjoying the excitement of playing DJs."

After seeing the Charlotte Symphony, Moore took up cello and played in the school orchestra, but she had bigger ambitions. When she saw violinist Miri Ben Ari duet with a turntablist on Showtime at the Apollo in 2001, it stirred a notion: Why not take Ben Ari's fusion of hip-hop and classical music to the next level, bringing the two different genres together in a permanent, full-fledged ensemble? It took time, because Moore's vision extended beyond merely blending genres and getting disparate musicians to rub shoulders. She also was concerned about Charlotte's increasingly inflexible socioeconomic structure. (A Harvard study last year ranked the Queen City dead last out of 50 southern cities in terms of upward mobility, both socially and economically.) Moore saw music as a gateway — a way to break down barriers among Charlotte's diverse and often divided communities.

And then, of course, there was HB2 and the police shooting of Keith Lamant Scott, both of which ripped apart Charlotte communities last year, the latter leading to a full-on uprising in the city that made headlines throughout the nation.

"I thought, 'How do you bring people together?'" Moore says. "I realized I've always made friends through music." Last year, Moore applied for a grant through the Knight Foundation and nonprofit 8 80 Cities, which awarded 20 civic innovators as part of the Emerging City Champions fellowship program. She got it, receiving $5,000 to launch H2O. With a mission to turn music into social capital, Moore got the H2O ball rolling by forging a few key alliances. With sponsorship from the Arts & Science Council's Cultural Block program, she launched a series of Music Speaks workshops, which takes local musicians, such as singer-songwriter LeAnna Eden, into classrooms to talk about their composition process.

Non-profit QC Family Tree donated the west Charlotte house where H2O does what she calls shed sessions. Word of mouth stirred interest among Charlotte's music community, and Moore was able to take an organic and gradual approach to recruiting ensemble members.

Terrance Shepherd, a 27-year-old classical pianist and music major at Queens University, was among the first to join H20. Moore offered him the position of keyboardist and musical director after seeing him play. He was thrilled. "I wanted to be a part of something that will take off," says Shepherd, who arranges beats in a format flexible enough to accommodate improvisation.

Shepherd urged his friend Marcus Bates, 27, who plays jazz saxophone, to sit in on an H2O jam session. Bates was immediately hooked. "There were such good vibes and positive energy," Bates says. "I learn something new every time we rehearse."

Omar Crenshaw, who spins under the name DJ Hugo, was interested in H20 as soon as he heard about the ensemble. "I came up in music through concert and marching band, so I have a lot of appreciation for live instrumentation," says Crenshaw, 30. "As DJ, I provide an element that bridges any gaps between the orchestration and the hip-hop songs."

Drummer Patrick Buckley, 28, says he joined because he believes "100 percent in Octavia's vision of breaking down social classes and barriers via music." 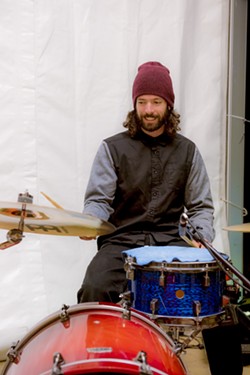 Other members of the collective include 24-year-old trombonist Gurtej Singh, who once played bass in a melodic hardcore band in South Carolina, and cellist John Boles, 31, who also plays with the Davidson College Symphony. He'll be attending his first H2O Shed Session on Saturday, Jan. 14.

The hard work in that west Charlotte house paid off when H2O played its first gig at a free community dinner Nov. 10 at the Skyline Terrace, hosted by fellow Emerging City Champions Fellowship grant recipient Pop Up Produce. "We wanted to support Pop Up Produce and their message about healthy eating," says Moore. "We were glad to provide the music."

"Everybody loved the set," Bates says. "We opened with Terrance playing a sonata from Mozart. It was beautiful. Then we gradually transitioned to jazz, some hip-hop, and then hip-hop soul. It was incredible." Plans to grow H2O continue. The ensemble teamed with the Arts & Science Council to play a Thanksgiving event at the Sugar Creek Recreation Center, and she's entered the SEED20 Challenge, a competition hosted by Social Venture Partners Charlotte.

"SVP Charlotte selects 20 nonprofits with social entrepreneurial ideas and they take you through a coaching process from January to March," Moore says. The idea is to prepare the group for a final onstage presentation to compete for award money on March 27 at the Knight Theater. At the very least, she hopes the training will help sharpen H2O's pitch for full nonprofit status later this year.

In addition, H2O is working on an Improv Tour, sponsored by the Arts & Science Council Culture Blocks program. "We'll play at recreation centers and libraries around Charlotte, starting in February."

With all these irons in the fire, H2O remains primarily focused on the music and the bridges it builds.

"People become friends just talking about music," Moore says. "Just by having a conversation about it, you realize how much we all have in common."