Descendants of the dragon

Bruce Lee. That's the first name that popped into our minds when we heard the words Enter the Dragon. But the current exhibition, of the same title, that's going down at Charlotte Museum of History isn't related to the action film. Instead, it focuses mostly on Chinese-Americans — from Charlotte and beyond — whose work remains mostly under the radar on the Q.C. turf. There is also a local art component that will bring a variety of cultures and mediums together.

Warren Zhong of the Overseas Chinese Culture Athletic and Arts Federation, the creator of the exhibition, devoted research, time and money — between a whopping $38,000-$45,000 — for the partnership with the Charlotte Museum of History. And, frankly, he can't hide his enthusiasm. During a meeting at the museum, he explains that hosting an exhibit of this merit has been something he's always wanted to do. He believes art and cultural events bring people together and that, within America's melting pot, there's a need for better understanding of diversity.

Zhong took some famous words spoken by Bruce Lee into consideration when conceptualizing for the project. In the past, when he was asked by reporter if he considered himself Chinese or American, Lee replied "You know what I think of myself? As a human being ... Because, under the sky, under the heavens, there is but one family. It just so happens that people are different."

Though Enter the Dragon kicked off in November with Xuelu Cui: Inspirational Oracle Bone Script featuring calligraphy and carried on through December with works by Han Dai Yu, it continues with local, regional and international artists through May 31.

From January 5-30 there will be a Group Exhibition that highlights works of varying mediums that have been created by local artists, many of who make up Union Studio.

Zhong, a Chinese-American who has lived in the Q.C. for 15 years and enjoys photography, is one of the six to eight artists who will showcase in the exhibit. His portraits of local Charlotteans — including folks like small business owners, nurses, construction workers — will be enlarged for the exhibition.

For the local-centric Group Exhibition, he and another photographer, Olly Yung, are the only two Chinese-Americans that are part of the showcase.

Yung, like Zhong, also photographs people and had the pleasure of shooting mayor Jennifer Roberts' press shots last year. She also photographs models from talent agencies and others in need of professional shots.

Other artists are folks that Zhong stumbled across through his time in the studio and randomly. The strangest place where he met a fellow artist was in dentist's chair. Several years back, while getting his teeth cleaned, he noticed a photo on the wall. It was taken by his dentist, David Lesansky, who photographs mostly industrial and architectural scenes that are often overlooked and/or forgotten.

"The more decay and rust present, the better; I love the stories implied by the effects of time and nature on man-made objects and buildings. I'm also pulled in by strong geometry — whether it be the arch-form of a grand doorway or the intricate detail of a cathedral's ceiling," Lesansky says.

Other artists featured in the group exhibit work with mediums such as furniture, oil painting, pottery and glass works. The group exhibition will run through Jan. 30 and will be followed by Weixin Xu: Miners and Beyond.

Weixin, who is a renowned Chinese-American artist living in New York, has painted a variety of artwork that reflects on Chinese society, specifically on working class jobs, including miners in China. This includes Weixin's "The Miner in China," a painting that was part of a series completed to pay tribute to miners in China who work under extreme labor conditions. 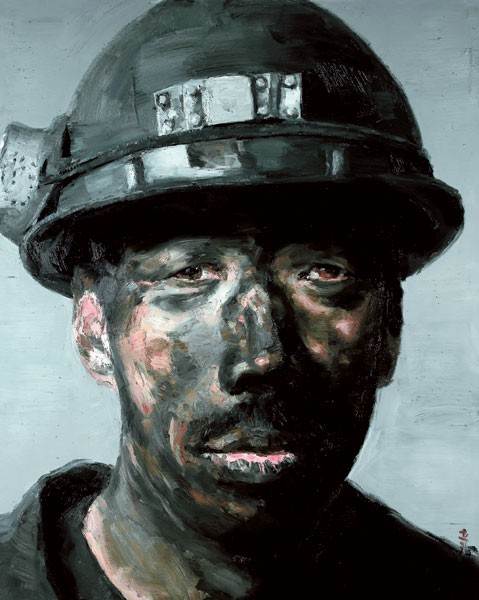 "From 2003, the Chinese economy has boosted tremendously, and more and more farmers go to work in the city as laborers. The main inspiration for me is to pay respect and show the human dignity of these daily laborers. I noticed some of them also work as miners at coal mines. During that time, the price of coal has increased and to boost the coal production, the coal mine owner didn't pay attention to the worker's safety. There were quite a lot coal mine safety issues and disasters that happened," says Weixin. "I visited the coal mines nears Shanxi, Hebei province and Beijing's suburban. I even went under the coal mine with the coal miners to work with them."

Zhong was emotionally drawn to the works. "I cry for his work because I am from China and I know that society of the last 30-40 years. Some how the whole society ignores the daily laborers, miners and construction workers. He, as an artist, captured and gave dignity to those miners as human beings," Zhong says. 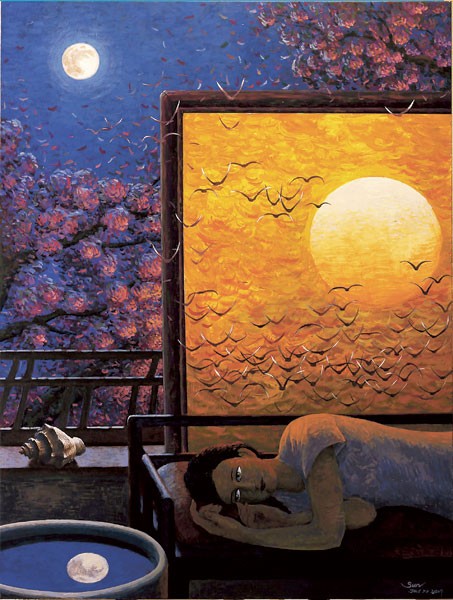 Other stateside artists of Chinese descent that will have exhibits up include Yaowu Zhang (March 1-30), Qinnian Tang (April 1-30) and Sun Liu (April 1-30). The final component of Enter the Dragon is a photo exhibition titled, 100+ Years Charlotte Chinese History (May 1-31). For this culmination they will capture Chinese-American's in Charlotte-related restaurants, churches, schools and other affiliations, including the ever-growing Charlotte Dragon Boat Festival held at Lake Norman annually.

"We live here. We're part of the community, so why not show people who we are and let them have a better understanding about us. Part of the whole purpose is to show how we contribute to Charlotte," Zhong says. "We live here, we connect with our community, we celebrate and we transform."