"We like to call ourselves an umbrella festival," Charlotte Film Festival programming director Jay Morong says. "If it's a quality project that registers with our submissions team, then we'll play it. We welcome everything."

"Everything" in this case encompasses over 85 films, including features, shorts, documentaries and narrative cinema, culled from submissions from over 35 countries.

The festival's wide array of cinematic viewpoints and voices will be on display Sept. 26–30, with film screenings at Ayrsley Grand Cinemas; and seminars, workshops and panel discussions at Wheelhouse Media, a production facility and agency in Uptown Charlotte.

It's a veritable feast of films, so Morong urges festivalgoers to come for the kind of film they know they like, then stick around for a screening of something outside of their comfort zone. There will be plenty to choose from, because attendees of this year's festival will be exposed to filmmakers of multiple gender identities, sexualities and racial dynamics. 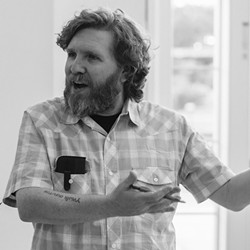 "In the last three years, as we've seen the culture shift and the film landscape change, that's where [the festival] has focused," he continues.

That's because the festival's tagline, "discover different," has been undergoing a philosophical expansion, according to Morong.

Since the festival's inception in 2006, its mission has been to showcase alternative narratives to standard multiplex fare, but now that focus is sharpening. Whereas "discover different" was interpreted in years past as the justification to screen a quirky comedy or an indie drama you'd never find on Netflix, the concept now includes films that examine social justice and stories that feature the voices of women filmmakers and filmmakers of color.

One of those voices belongs to Albert Lawrence, who wrote, acted in, co-produced and co-directed the drama Theo's Trade, the story of an African-American TV newsman who struggles with the tone and tenor of media coverage of racially charged events. Lawrence draws on his experience as an on-air correspondent with KABC-TV in Los Angeles to tell his tale.

"I've wrestled with discerning the difference between exposing injustices that plague communities versus exploiting their pain," Lawrence says.

Social justice comes to the fore in Winston-Salem-based filmmaker Gregg Jamback's documentary In Pursuit of Justice. The film documents the case of Greg Taylor, a North Carolinian who was wrongly imprisoned for a brutal slaying. Taylor's 17-year struggle to prove his innocence led to the formation of North Carolina Innocence Inquiry Commission, a state agency that examines post-conviction claims of innocence.

Despite Taylor's harrowing ordeal, Jamback feels the documentary's message is a positive one.

"If criminal justice reform is possible in North Carolina, for crying out loud, it's possible everywhere." Jamback says.

Catherine Dudley-Rose is a returning filmmaker to the festival, choosing to tell a more intimate story with her drama, Parallel Chords. Dudley-Rose's feature depicts a young violinist struggling to break free of her pianist father and find her own voice.

"I did a short version of the film that played here in Charlotte in 2015," Dudley-Rose reveals. "So it's a thrill to be able to return with the feature."

A socially conscious outlook infuses Gus Krieger's My Name is Myeisha, a hip-hop musical inspired by the 1988 police shooting of a California teenager. Krieger says he was drawn to adapt his film from an existing stage play because he found the story compelling, vital and universal.

"It's the story of a young woman, the life she led, her dreams and flaws and aspirations," Krieger concludes.

Producer Benjamin Wiessner brings his South by Southwest award-winning film Thunder Road to the festival. As a police officer comes to grips with death of his mother, the film spins a heart-breaking comedic tale of loss, legacies and parenting.

"As a group of Southern filmmakers, we made a very Southern movie" Wiessner says. "It's an honor to have it championed on the world stage."

Continuing in a comic vein is FP2: Beats of Rage, a sarcastic parody of 1980s and 1990s action films. It's about white trash anime characters competing to the death for a post-apocalypse cache of booze, says director and star Jason Trost.

"[Despite its humor], the film is at its core, it's a real movie, with real stakes and no winking at the camera," Trost says.

Multiply these six films by a factor of fourteen, and you can begin to get an idea of the festival's range and scope, Morong points out. In addition, the festival insists on a degree of exclusivity, Morong says, so each feature will be receiving its Charlotte or regional premiere at the festival, and none of the films have yet been commercially released.

On Sept. 29, composer Cristina "Trinity" Vélez-Justo, who also runs the Charlotte-based business ReelScoring, will conduct the workshop, "Film Composing and Perception." Vélez-Justo will focus on what she refers to as "the golden age of film music," the 1930s through the 1970s.

Later that afternoon Vélez-Justo will join Dudley-Rose and producer/assistant director Charlotte Stein for a panel discussion, moderated by Juli Emmons, founder and president of the Carolina Film Community.

"They will be talking about being female filmmakers in the industry," Morong says. The festival's slate of films and workshops may be ambitious, but Morong feels Charlotte deserves and can accommodate such a wide variety of programs. He cites the festival's long-standing support from Charlotte institutions such as The Arts & Science Council and The Charlotte Film Society. The audience for the festival has been growing steadily year afer year, he notes.

"I think Charlotte audiences are cinema-literate and open to different voices," Morang says. He credits that literacy to increased access to movies due to a home video boom in the 1990s and the current popularity of streaming services. But he cautions that this all-important access is constricting.

"At one point in this town, we had 14 art house screens, with Park Terrace, Ballantyne and the Manor, but now we're down to seven," Morong says. Making matters worse, the bigger-name art house titles rule the distribution roost, so those seven screens are only showing four different movies, he adds.

"BlacKkKlansman is a great movie, but it's playing on a lot of screens, whereas the maker of Thunder Road, one of the grand prize winning films at South by Southwest, is self-distributing." In an industry climate like this, the festival audience becomes even more important to indie filmmakers, Trost says.

"It's disheartening that most of the big festivals have turned into publicity runs for movies that already have distribution, as opposed to festivals like Charlotte that are more about finding undiscovered talent." Trost maintains. "To me that's more interesting and important." Thunder Road producer Wiessner also weighs in on the importance of festival audiences.

"For an independent film, those audiences become your evangelists," Wiessner says. "Word of mouth is really what grows a small film."

"We're bringing Charlotte some unique and interesting voices," Morong concludes. "We're giving people an opportunity to experience these voices in a theater, and slowly but surely, those voices are reaching audiences."