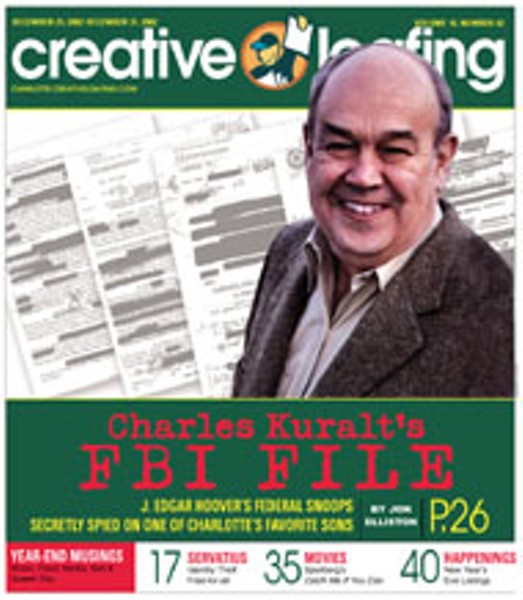 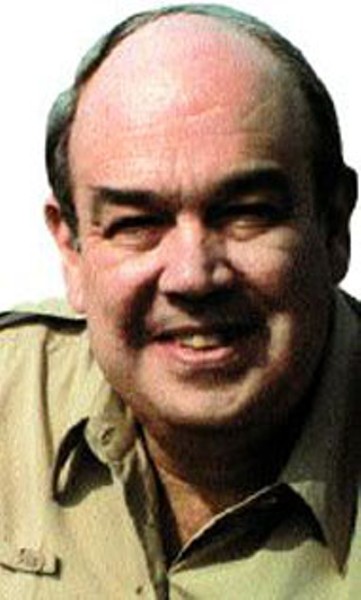 J. Edgar Hoover's snoops spied on one of Charlotte's favorite sons
Charles Kuralt was retiring, and he had some stories to tell. In March of 1994, the veteran journalist, and one of Charlotte's favorite sons, was visiting his alma mater, the University of North Carolina at Chapel Hill, and recalling his time as an undergraduate 40 years earlier. Speaking before a packed auditorium, Kuralt covered many topics, but his fondness for the university stood out. He spoke of the unique free-spiritedness he encountered there: "a certain democracy in the air, a certain tolerance that distinguishes Chapel Hill."However, that tolerance was not immune from the tug of mid-1950s politics, as Kuralt learned while working for the campus newspaper. "I was editor of the Daily Tar Heel in a time when censorship was much in the air," he remembered. Early on, the budding broadcaster had staked out controversial opinions. In fact, he had narrowly won the editorship after campaigning for integration and against the university's growing focus on big-time sports.

And then, Kuralt used the position to sound off on touchy issues. On April Fool's day, he recalled, the newspaper printed a parody edition, "The Daily Witch Hunt," which lampooned Senator Joseph McCarthy and other anti-communist stalwarts when they were near the peak of their power.

That brought a swift reaction from the government, Kuralt recalled in his speech. "There was an FBI agent who was ubiquitous on the campus, and he came by the Tar Heel office the next morning and said, "Don't you kids know what you've done? You've ruined your lives.' He said, "Your names are going to be in the files forever.'"

Kuralt never forgot that threat. "I have toyed with the idea of writing to them under the Freedom of Information Act and see if they really did put our names in their files," he said.

Well, they really did. Had Kuralt requested his file, here's what he would have seen: 10 pages of internal FBI documents, half of them highly classified. Routing information on the papers indicates that most of them passed the desk of J. Edgar Hoover, the bureau's longtime director. Much of what the file says is still hidden from the public, since the FBI blacked out half of the text before releasing the papers in response to a 2001 Freedom of Information Act request. The bureau contends that the documents, which date from 1962-65, contain secrets that should stay secret, even now.

Declassified files like these can serve as a modern-day cautionary tale: With the passage of sweeping anti-terrorism legislation like the USA PATRIOT Act, the FBI has acquired new authority to probe into the private lives of national security suspects. And the Bush administration and senior FBI officials have prodded field agents -- including the ones stationed in North Carolina -- to become much more aggressive in their national security investigations.

The FBI's Kuralt file, compiled during the era of Hoover's most aggressive and intrusive "investigations," offers a reminder that innocent bystanders -- including the occasional journalist -- can get caught up in the web of aggressive domestic intelligence operations.

In Good Company
The story of the Kuralt file will remain incomplete until the FBI lifts its blackout and declassifies the rest of the documents. But for now, the portions made public reveal substantial details. To begin with, the documents offer stark reminders of how deeply the FBI delved into media matters during the Cold War. They were written during the heyday of the FBI's secret snooping on Americans, and the targets included some of the most highly regarded journalists in the country. And some of the least radical or subversive. The FBI is well-known for its zealous information-gathering, but a file on Charles Kuralt? That kindly gentleman journalist more suited for a fishing vest and fly rod than a cloak and dagger?

Unlikely as it may seem, in making his way into the FBI's files, Kuralt is in good company: The roster of North Carolina notables who have done so includes Terry Sanford, Carl Sandburg, and Thomas Wolfe -- not to mention the hundreds of mostly unheralded citizens involved in causes ranging from civil rights to free speech to world peace.

Kuralt, a Wilmington-born and Charlotte-raised newsman who died in 1997, cut his reportorial teeth at the Daily Tar Heel and the Charlotte News, then rose to fame on the strength of his poignant human interest broadcasts for CBS. He became a television icon on shows including Eyewitness, On the Road, and Sunday Morning, the last of which became, for millions of Americans, a weekly ritual as regular as a visit to church.

In some respects, the FBI's interest in Kuralt is not so mysterious. He was not an especially political person, but, for a time at least, he reported on highly politicized stories. And though he was hardly a radical, some of his best reports told the stories of American underdogs: coal miners, dispossessed farmers, unions on the wane.