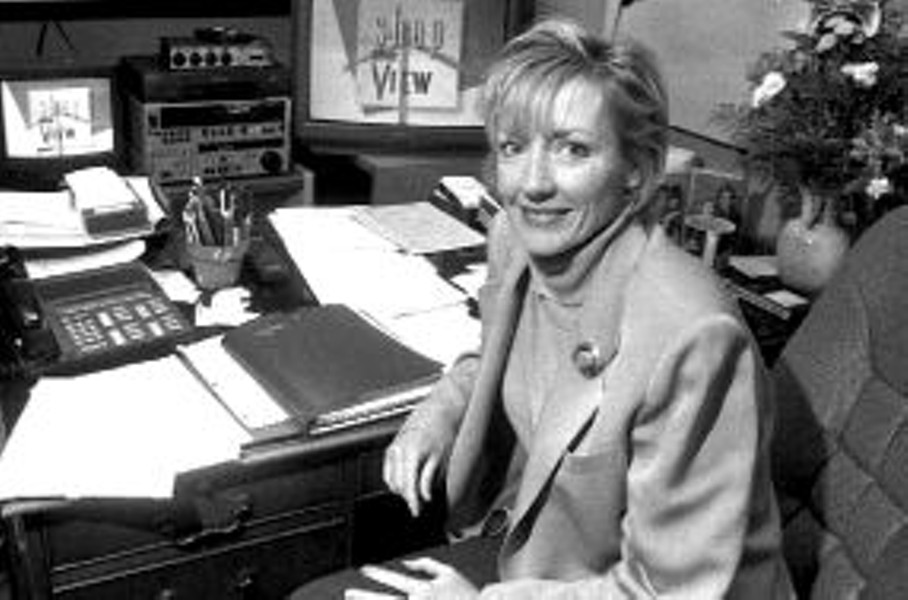 Radok Robin Whitmeyer
This I know is true. If a newsroom actually cheers when a new boss is announced, it's a rare thing, but that's exactly what happened recently, when longtime staffer Robin Whitmeyer was promoted to news director at top-rated WSOC-TV.

Whitmeyer is also unusual because she's been there for 20 years, and has worked her way up the ladder from intern to cameraperson to producer to the big job. Her father, Bob McCourt, was a past WSOC program manager as well.

And here is another rare thing: she actually talked, candidly and without that pit-bull feel of Channel 9 bosses past, when we chatted last week about her new job, and what it's like to run Eyewitness News. Are there any changes in store, as is often seen with any new manager?

"I feel lucky to work with a great group of people who work their butts off every day," Whitmeyer told me. "I don't ever want to make predictions because I've been here a long time, but if it ain't broke, why fix it? I'm not about changing something just to change it. We don't like to lose. It's a high-energy newsroom with an edge, because we know what we're working for."

We also talked about 9's reputation for an aggressive coverage style and crime-heavy content, which she believes has been tempered in recent years.

"Maybe at one point it wasn't an unfair tag, but we will continue to do breaking news, and the news of the day. If you really look at our newscasts, I think we're telling relevant stories. Crime, and the prevention of those crimes, and personal safety. . .those are important stories in our community," she says.

And what's the biggest change she's seen in the Charlotte news market in her years here?

"I think news has gotten a lot more competitive, and stations know how to do news here. We always have an eye on our competitors. Because of technology, others are also getting into the mix, like Time-Warner Cable and Fox 18. And there's the Internet, which is another great resource. It's all competition."

Stacey Simms is another woman in media raising her profile lately, joining WBT-AM's morning show as co-host with Al Gardner. Simms, who left WBTV for the radio gig, brings a new viewpoint to the show, namely filling up the woeful void of on-air females at the station, and a 30-something's perspective.

"I knew it was what I wanted to do," she said, "and I'm humbled and excited to have the job."

A working mom with a one-year-old, Simms began dropping heavy hints to WBT execs that she'd like to do more with the station after health reporting and a fill-in stint with Gardner in May.

"I don't feel like a token female at all, though it's definitely been a male-dominated station. I hope I'll help round out the broadcast, and I do have a different point of view," Simms says.

I asked, and you responded, when WXRC-FM changed format to the "The Ride." Reader Neil, who's a newcomer to Charlotte, says, "When I first moved here, I was amazed at the radio stations. I was glad to have two classic rock stations that play deep cuts from albums that have never seen the light of day. Especially 95.7. I also enjoyed the Lex and Terry show. After their show, a great mix of music for the rest of the day. Then, Labor Day and now the great change to "The Ride." It has the strangest mix of music I've ever heard! Pink Floyd followed by the Beach Boys. It's like listening to somebody's perfect album of download songs!"

And then there's Reader Terry: "First of all, I don't know why this station and its utter incompetence at fielding a decent format for umpteen years now bugs me so much; it just does. I've listened to this station on and off for seven years, and am just constantly amazed and appalled at what the braintrust thinks is good radio. (Phil Hendry? Lex and Terry?)

"Now the new format, that takes out the horrible attempts at morning personalities, and basically turns the station into MUZAK-like, all-music 90 percent of the time format. This may be welcome in lieu of what we've had to listen to, but again, it's obvious this is the last gasp of a dying station. What's next? "All kazoo, all the time?' It just pisses me off (again, don't know why) to see a venue like this just wasted by morons." OK. Well, thanks for your feedback, Terry.

There are more national TV shoots happening in Charlotte, and we hope to see the fruits of that video labor soon. The Food Network's Bobby Flay spent time at our beloved Coffee Cup for an upcoming segment, along with some other local segments for a future show as he takes a tour of American food. About time he got out of Noo Yawk and sampled livermush. I think elsewhere it's called pate.

On September 26, the Arboretum Wal-Mart was the scene for a taping of the syndicated PBS show For Your Home. Hosts Vicki Payne and daughter Sloan Rutter did a segment on fabrics. Cutter Productions, Payne's Charlotte production company, shot the show.

Various and Sundry from the QC: The anchor hunt is over at WBTV, with one new face on the anchor desk and others shifting seats. Jan Jeffcoat arrives from WCSC-TV in Charleston to co-anchor morning and noon newscasts. That shifts Shannon Bream to 5pm, and Tonya Bendickson will do 6 and 11pm. Another change is that Bob Knowles will now just anchor the 5pm, replaced at 5:30pm by Paul Cameron. . .

Unintentional But Embarrassing: Late last month, the Charlotte Observer did a weekend feature on a local couple expecting quintuplets, but the couple had lost the babies over the weekend. Although an apology was printed, and the family in question was forewarned, it nonetheless brought comments along the lines of "Maybe they could do without those ads just this once?" That may not be feasible, but the incident does bring into question such early printing of weekend feature sections. . .

Sports Jocks Redux: WFNZ-FM has signed the hosts of the Morning Sports Page AM show to "long-term contracts," meaning Tom Carey, Jim Celania, Tom Reilly, and Mark Yarbro. The station is very happy with ratings gains the show has made in its man-only 25-54 niche. . .

Help Needed: Any local videographers willing to donate some time and shooting talent to a worthwhile Habitat for Humanity project October 26-November 2, e-mail me at the address below. Free brownies! Stay tuned.