Supergrass
Life On Other Planets Island 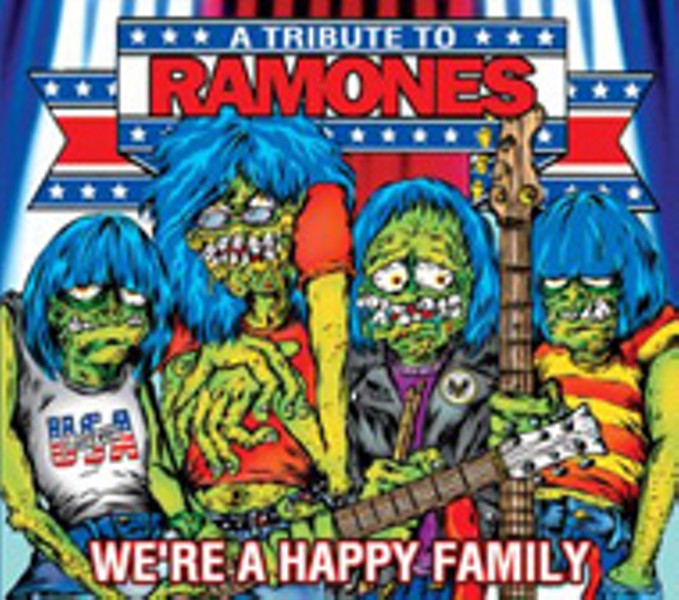 Various
We're A Happy Family -- A Tribute To The Ramones
Columbia

Fischerspooner
#1
Capitol
Supergrass, God bless 'em, has never had a whole lot of luck with America, despite releasing a string of 60s-inspired-yet-forward-thinking albums that rank among some of the best releases of the last decade. Every time the band's popular profile threatens to grow, along comes someone else to mow them back down again. In the mid-90s, it was Blur and Oasis gathering the critical huzzahs; in the late 90s, fellow studio wizards Radiohead. Now, of course, you have the numerous "The" bands and the Swedish Invasion. However, through it all, Supergrass managed to combine a mad-genius studio slant with engaging, lively songs that pricked the ears whenever listeners were lucky enough to happen upon one. Life on Other Planets is more laid back musically than anything on past albums I Should Coco or In It for the Money, but the arrangements and hooks still jump out of the studio sugar like a razor blade on Halloween night. "Rush Hour Soul" and "Evening of the Day" are fine examples of the band's newest sound, but any will do. With the career-minded "radio artist" dying off daily in the music world, looking for Life On Other Planets isn't a bad idea at all. (Davis)

King Missile, best known for their "novelty" hit "Detachable Penis," have finally released a new album of sarcastic barbs, and this first release since 1998's Failure is more of the group at its best. King Missile is definitely an acquired taste, but the CD's highly recommended if you like spoken word type hilarity backed with some solid jazzy tunes. The album contains a great string of short pieces called the "Pain Series," wherein are contained KM's take on would-be reactions to hot coffee, hammer thumb, paper cut, cool pool and stomach cramps. The third track, "Damned If I Know," is every parent's answer (that they've never used) to the endless questions posed by children, and "The President"... well, that song is perfect for anyone who isn't a big fan of Dubya. If you don't like cynicism and lots and lots of cursing and things that would traumatize 90 percent of the mainstream music industry (see The Miracle of Childbirth), then this album is definitely not for you. But for any true blue fan, it's definitely a must have. There's even a "millennium edition" of "Jesus Was Way Cool" for extra incentive! (McKinney)

Tribute albums are generally hit or miss -- at times simply a rehash of what's already been done, at others a new take on a well-established classic. And more often than not, they're simply awful! This particular tribute album comes out on the positive side, with an odd collection of well knowns, should be knowns, and unknowns contributing. The cover of "Daytime Dilemma" (Eddie Vedder and Zeke) is wretched, particularly since it's included as a "bonus track" on the CD. However, there are stellar covers of "Sheena Is A Punk Rocker" and "Return of Jackie & Judy" by Rancid and Tom Waits respectively, and even U2's rendition of "Beat On the Brat" is well done. Covers of "Blitzkreig Bop" by Rob Zombie and "53rd & 3rd" by Metallica will have you scratching your head at their decision to slow down a Ramones' song, and Marilyn Manson's cover of "The KKK Took My Baby Away" pretty much sounds like every other Manson song. All in all, the CD is solid, and with part of the proceeds from each sale going to benefit the Lymphoma Research Foundation, it's a good addition to any collection. (McKinney)

#1, in which Casey Spooner and Warren Fischer have the gall to print in large block letters inside their CD package -- hell, on the CD itself -- how damn great they are, with lauds from just about every English rock-cum-fashion magazine there is (and that's a lot!). Mostly, it's recycled New Wave with a dash of part-time Gap outlet store worker "punk rock" thrown in by way of "updating" it. It's still pretty listenable, however, especially when heard on a sexy mix tape or DJ mix -- which is to say, with the fashion attached. Minus the pomp (and pompousness), it begins to get old rather fast, like a supermodel who must get by only on her charm and wits. You can't blame Fischerspooner for trying, but just as in the fashion world, there are tons more new faces right behind them. (Davis)