Cat Ballou, Father of the Bride, The Witch among new home entertainment titles | View from the Couch | Creative Loafing Charlotte

Cat Ballou, Father of the Bride, The Witch among new home entertainment titles

DIRTY GRANDPA (2016). The plot of this atrocity can be discarded with one sentence: After the death of his wife, the elderly Dick (Robert De Niro) talks his straight-laced grandson Jason (Zac Efron) into driving him to Daytona Beach during Spring Break so he can get laid. This simple plot fuels an eternity of watching De Niro once again mug shamelessly, Efron once again display all the comic instincts of a dead hornet, and filmmakers once again assume that profanity and scatology are worthy replacements for wit and timing. To be sure, there's often nothing quite as liberating as a raunchy, foul-mouthed comedy, but the crude moments have to be woven into the storyline, not just sprayed onto the screen like a wayward money shot in a porn flick. There are the usual bits of gay panic and casual sexism generally found in this sort of nonsense — incidentally, the 72-year-old De Niro's lover in this film is played by 31-year-old Aubrey Plaza, because why not? — as well as a loving shot of Dick's (prosthetic) penis. Admittedly, I did smile a couple of times over the course of the film; I don't remember the scenes — apparently, they weren't that memorable — but I do remember smiling. I'm fairly certain it wasn't during any of the sequences featuring the astonishingly irksome Jason Mantzoukas as an amiable drug dealer named Pam. I'm likewise pretty sure it wasn't during the scene in which a dad thinks a naked Efron is sexually molesting his 4-year-old son. And I'm certain it wasn't during the countless times that De Niro sticks his finger up Efron's ass. Then again, that last-named is the only way a movie as awful as Dirty Grandpa will receive a thumbs up.

The Blu-ray contains an unrated cut of the movie which runs approximately 11 minutes longer than the R-rated theatrical version. Extras include audio commentary by director Dan Mazer and writer John M. Phillips; a making-of featurette; and a gag reel.

FATHER OF THE BRIDE (1950). A genuine cinematic treasure, Father of the Bride finds Spencer Tracy delivering arguably his finest performance as Stanley Banks, whose staid family life turns increasingly hectic once his oldest child and only daughter, Kay (Elizabeth Taylor, never lovelier), announces that she's going to get married. Stanley's wife Ellie (Joan Bennett) handles the situation gracefully, but "Pops" is a mess, worrying about the mounting bills, contending with a fussy wedding coordinator (Leo G. Carroll), and mourning the loss of both his beloved daughter and his own youth. The laughs never stop cascading off the screen — I love Stanley's reaction once he sees which of Kay's many suitors has managed to win her heart, and there's a startling dream sequence that would be more at home in Hitchcock's Spellbound or even the later cult flick Carnival of Souls — but what makes the movie, and particularly Tracy's performance, so exceptional is the manner in which it gently brings up the unavoidable heartbreak in this most enduring and celebrated of traditions. Father of the Bride was remade (with mediocre results but sizable box office; see review here) in 1991, with Steve Martin taking over the Tracy role. This 1950 version earned three major Academy Award nominations: Best Picture, Best Screenplay (Frances Goodrich and Albert Hackett) and, of course, Best Actor (Tracy's fourth out of nine career nods). Tracy, Taylor, and the rest of the primary cast reunited for the following year's sequel, Father's Little Dividend. 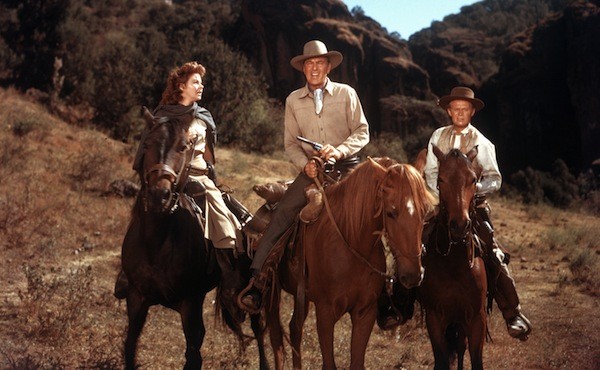 GARDEN OF EVIL (1954) / CAT BALLOU (1965). The Twilight Time label has debuted two vintage Westerns on Blu-ray, but is it sacrilege to declare that I prefer the one that's not an Oscar-winning classic?

Despite its good-as-gold cast, Garden of Evil, directed by noir specialist and Western veteran Henry Hathaway (True Grit, The Sons of Katie Elder), has largely been forgotten over time, with many of the scribes who have bothered to catch it dismissing it as a talky, clunky oater. Yet I for one appreciate its unhurried pace and its willingness to let its characters gab instead of gun-fight. While hanging around a small Mexican village, three Americans (stalwart Gary Cooper, philosophical Richard Widmark, cowardly Cameron Mitchell) and one local (excitable Victor Manuel Mendoza) are hired by a woman (Susan Hayward) to travel through hostile country and rescue her husband (Hugh Marlowe), who's been injured while searching for gold. The character dynamics are what make this tale interesting, and it's never hard to watch these A-listers in their patented roles — Cooper as the voice of reason, Widmark full of wisecracks and wit, and Hayward exuding fiery independence.

More of a commercial than critical smash back in the day, Cat Ballou has since seen its standing ripen into that of a bona fide comedy cornerstone. Yet the picture isn't as consistently funny as its reputation would suggest, as it relates the tale of naïve schoolteacher Catherine Ballou (Jane Fonda), who hardens into an outlaw after her father (John Marley) is targeted by the ruthless gun-for-hire Strawn (Lee Marvin). To fight back, she hires the legendary Kid Shelleen (also Marvin), learning too late that he long ago turned into a drunken lout who has trouble even hitting the side of a barn. Marvin is terrific (especially as Kid Shelleen), but there's not nearly enough of him; instead, Fonda's comparatively drab character takes center stage, with too much time spent on her tepid romance with a fellow outlaw (Michael Callan). For a better example of how the West was fun, check out the same decade's uproarious Support Your Local Sheriff! (also available on Blu-ray from Twilight Time; see review here). Nominated for five Academy Awards (including Best Adapted Screenplay), this earned Marvin the Best Actor Oscar. 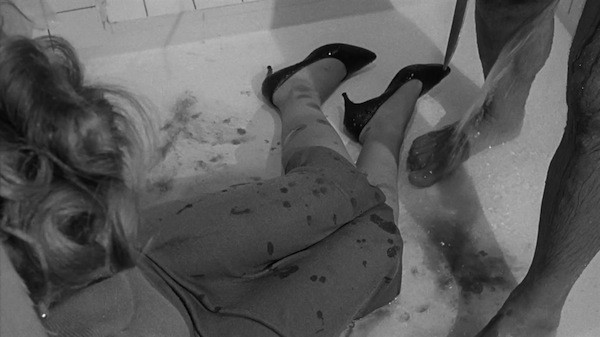 I SAW WHAT YOU DID (1965). "This Is A Motion Picture About UXORICIDE!" blared writer-director-showman William Castle in the ads for I Saw What You Did. And what, pray tell, is uxoricide? It's the murder of one's wife — not to be confused with mariticide (the murder of one's husband), avunculicide (the murder of one's uncle) or any of the other "cides" indicating the killing of a family member. Castle frequently employed gimmicks to promote his movies — "Percepto" for The Tingler, "Emergo" for House on Haunted Hill, etc. — but with this nifty thriller, the closest thing to a gimmick is the ingenious plot itself. Teenagers Libby (Andi Garrett) and Kit (Sarah Lane), while babysitting Libby's little sister Tess (Sharyl Locke), pass the time phoning randomly chosen strangers and whispering, "I saw what you did and I know who you are." It's all fun and games for the girls until they dial the number of Steve Marak (John Ireland), who has just brutally stabbed his wife (in a Psycho-inspired shower) and is unnerved by this cryptic phone call. With the inadvertent help of his mistress (Joan Crawford), an older neighbor who seeks to own him body and soul, Steve manages to obtain Libby's name and address; first, though, he has to deal with burying the corpse. The twinkly music score by Van Alexander is almost as inappropriate as the one composed by Les Baxter for 1962's Panic in Year Zero! (recently reviewed in this column); otherwise, this is a clever and consistently entertaining "B" flick that finds Castle in top form.

Blu-ray extras consist of a photo gallery and the theatrical trailer.

THE WITCH (2016). Reminiscent of such works as the superb 1996 film version of Arthur Miller's The Crucible and the astounding 1922 Swedish docudrama Haxan: Witchcraft Through the Ages (formerly banned in the U.S. but now available on Criterion DVD), this confident undertaking by debuting writer-director Robert Eggers is set in 1630 New England, wherein a family of seven is forced out of its community and relocates to a small cabin on the edge of a formidable forest. Almost immediately, the baby is snatched by an elderly witch residing in the woods — no one actually sees her, but everyone in the family, including household head William (Ralph Ineson), wife Katherine (Kate Dickie) and blossoming daughter Thomasin (Anya Taylor-Joy), senses the evil all around them. They call upon their rigid Christian doctrine for strength, failing miserably to ever trust in — or turn to — each other; as a result, accusations of consorting with the devil fly fast and furious. More than just a terror tale, The Witch harbors several weighty themes, including the fear of the feminine mystique in a patriarchal society as well as the danger of placing too much faith in a puritanical belief without allowing other emotions an equal opportunity to breathe. These notions are punched across not only by Eggers' persuasive sense of time and place but by the forceful work of the entire cast. It's just a shame the ending registers as a cop-out. Certainly, cases have been made that the finale is an inevitable conclusion to everything that has transpired up to that point, but to me, it feels facile, ignoring specific convictions and relationships for the sake of wrapping up with startling imagery. I can't say for sure whether the devil is in the details, but he doubtless had a hand in the clumsy climax.

Blu-ray extras include audio commentary by Eggers; a making-of featurette; and a Q&A session.

Jay Shetty: THINK LIKE A MONK: HOW TO REACH YOUR FULL POTENTIAL IN LIFE BY MASTERING YOUR MIND: London Real