We Were Soldiers: Casualties Of War | Reviews | Creative Loafing Charlotte

We Were Soldiers: Casualties Of War

Despite its relative lack of Oscar cred, the war flick Black Hawk Down can at least take consolation in its financial status, as it stands to ultimately gross upward of $100 million at the US box office. That's all well and good for producer Jerry Bruckheimer and crew, but where does that leave We Were Soldiers (***1/2 out of four)? It's never a certainty that following immediately on the heels of a similar picture spells commercial death -- Braveheart, for example, opened less than two months after Rob Roy yet grossed twice as much -- but given the common thematic threads between these current films, as well as considering that the audience's appetite for a patriotic combat picture may now be sated, it's reasonably safe to say that We Were Soldiers faces an uphill struggle. 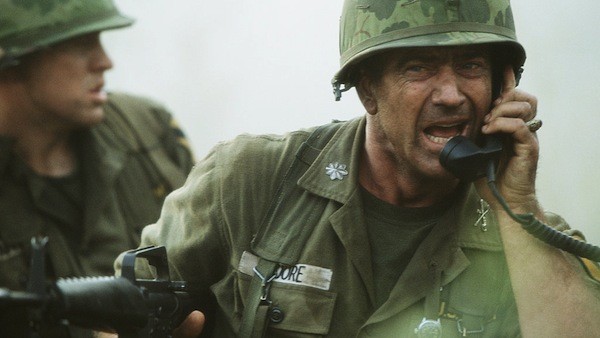 That's a real shame, since Soldiers is infinitely superior to Black Hawk Down. While both films center on the inspiring mettle demonstrated by American soldiers under fire, this latest movie does a far better job of placing a human face on the spectacle of war. For many people, the expository scenes and domestic interludes in Soldiers may feel like wheel-spinning -- brief and unnecessary respites from the battlefield bombardments. But in reality, they provide the piece with an intimacy and emotional scope that easily allow it to overcome some rough narrative patches -- and put Bruckheimer's glorified video game to shame.

Unlike most of the celebrated Vietnam War films, which take place after the war has been raging for several years, this adaptation of Joe Galloway and General Hal Moore's book We Were Soldiers Once... and Young is based on an event that occurred toward the start of the US's involvement in the conflict. On November 14, 1965, approximately 400 US soldiers, members of the First Battalion of the Seventh Calvary (the same outfit as General Custer's, we're informed early on), landed in Vietnam's Ia Drang Valley, a piece of land also known as "The Valley of Death." Almost immediately, they found themselves surrounded by 2,000 enemy soldiers, yet despite being outnumbered 5-to-1, our boys not only put up a valiant struggle but also scored victories on a number of fronts.

Much of the credit for their collective resolve would seem to fall on Lieutenant Colonel Hal Moore (Mel Gibson), a natural leader in the paternal mold, and an officer who always insists on being the first to set foot on the battlefield. Lt. Col. Moore is surrounded by some equally decent compatriots, including Sergeant Major Plumley (Sam Elliott), his tough-as-nails second-in-command; Lieutenant Geoghegan (Chris Klein), a fresh-faced young officer adept at bonding with his men; and Major Bruce "Snakeshit" Crandall (Greg Kinnear), a maverick chopper pilot. Joining the fray at a later point is Joe Galloway (Barry Pepper), a photojournalist determined to capture the war for the people back home by (as he puts it) shooting a camera rather than a gun.

We Were Soldiers can hardly be accused of jumping into the fray; indeed, it's a full half-hour before we even touch down in Vietnam. Instead, writer-director (and Duke University grad) Randall Wallace spends some time with each of the principal characters, a logical approach that heightens our concern for their well-being once the bullets start flying. And once the soldiers hit the combat zone, the film periodically breaks away to check in on Moore's wife (Madeleine Stowe) and the other women fretting for their men overseas. Yet these are hardly the same dull sequences that have marred many a fine war flick; instead, Stowe's character is given her own difficult task (informing the other wives that their husbands have been killed), and enduring her agony only serves to accentuate the intensity of what's happening on the killing fields even more.

As far as the actual combat scenes go, they rank among the best of recent times, and for one primary reason: Unlike practically every other war film made in the past couple of years, from Black Hawk Down to Enemy at the Gates to, heck, even Gladiator, they do not slavishly copy the template created by Saving Private Ryan. The grainy style of Ryan has been ripped off so often, you'd think Hollywood had never made a war movie prior to that one. But We Were Soldiers adopts a more traditional style, which, given its recent absence, makes the carnage scenes positively jump off the screen. Still, the battle bits aren't so retro that they ignore the gruesomeness of the situation; on the contrary, some of the blood'n'guts moments provide the R rating with a real workout (the fate of the Japanese-American soldier is particularly heart-wrenching).

Admittedly, some of the dialogue can get a little heavy-handed, reminding us that Wallace was the guy who not only wrote Braveheart but also the marble-mouthed Pearl Harbor. Yet although some of the words may clank, the sentiments don't: This is that rare Hollywood movie that isn't afraid to present its leading characters as devout Christians honestly seeking to reconcile their predicament with a spiritual soothing, and it's that even rarer Hollywood movie that allows us to spend a little time with the enemy in an effort to show that the devastation of war hits on all fronts and in all facets (a far cry from Black Hawk Down, which was so one-note it prompted one alternative critic to sarcastically tag it Blacks Shot Down). I'd be a little reluctant to label We Were Soldiers first and foremost an anti-war film -- its points aren't made as baldly or as savagely as in, say, Stanley Kubrick's timeless Paths of Glory -- but regardless, it's probably safe to say that, to Wallace, the smell of napalm in the morning doesn't smell like victory as much as a valediction to man's saner impulses.