At Carol Waggener's first corporate gig, with Tropicana, her boss would often peek over the cubicle as she entered the building and announce to the office, "Here comes the Bold Missy!" It was a playful ribbing — especially compared to the blatant harassment many women faced in the corporate world at the time — that was based on Waggener's take-no-shit approach at work, and eventually the nickname stuck, following her from Tropicana to a decade-long stint with Anheuser-Busch, before she was pushed out during the 2008 merger that made the company AB Inbev.

Waggener has been happily employed by Snyder's Lance ever since, but three years ago, she had an epiphany while drinking a beer at Triple C Brewery during a brewery crawl in South End: the craft beer world was where she belonged.

She then embarked on her boldest mission yet, attending a three-day "Start Your Own Brewery" seminar at Siebel Institute in Chicago, completing a 24-week craft beer program at Portland State University and visiting around 200 breweries around the country before acquiring a loan, cashing out most of her retirement fund and opening Bold Missy Brewery in NoDa in May of this year. 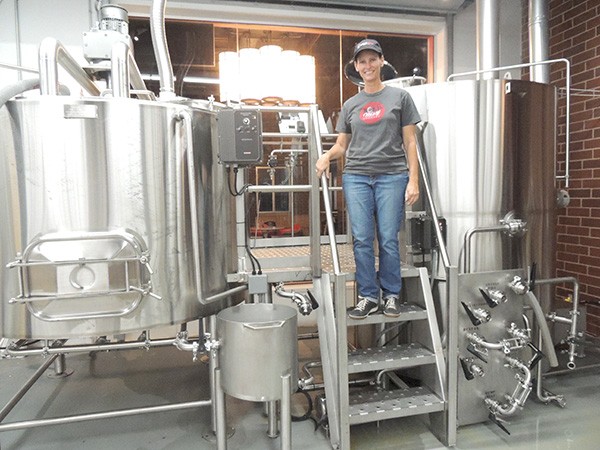 "I haven't really slowed down," Waggener said, looking back on that day at Triple C. "I sort of went all in, and here we are."

On September 16, Waggener hosted an event with Alison Levine, who has completed the Adventure Grand Slam, climbing to the highest peak on each continent and skiing to both the North and South poles. To complete the slam, she led the first all-woman team to the peak of Mount Everest in 2010.

Levine was on hand for the release of Conquer the Route Chocolate Stout, a beer named in her honor. She poured the first glass and addressed the crowd of about 70 people who showed up.

Each beer at Bold Missy includes a pulp magazine, dime novel graphic design, with posters featuring each one looking down on drinkers in the brewery. The marketing plan has been effective, and hasn't turned any men away, as was an early concern.

"One of our concerns was, will we have men in here or are they going to say, 'It's a chick bar,'" said Lybbi Roth, tap room manager and Waggener's niece. "But that's one thing that's drawn in a lot of men. They're like, 'I'm a huge history buff, I love that you've done this.' One of our bartenders is a history teacher and he's got a list of nine other women that he'd like to name beers after. So people really identify with it regardless of their gender."

Although the women of Bold Missy are more than happy to wear their pride on their sleeves — or graphics — they downplay the difficulty of breaking into the boys' club of brewing.

"We go to events that are more industry focused and it's like we're the only girls there," said Roth. "But I don't feel like anyone's necessarily discriminating against us. We've had some people who have come in and are snotty, and they're like, 'Well you just think because you're a woman with a brewery and blah, blah, blah.' But apart from the obvious — and I know Legion has a female brewer [Alexa Long] — that there's not a lot of women in the industry, I don't feel like we're being excluded or that we're sticking out like a sore thumb."

Waggener agrees, and doesn't put much thought into her role as Charlotte's first female to own a brewery straight up (Sarah Brigham co-owns Sycamore Brewing with her husband, and Suzie Ford co-owns NoDa Brewing Company with hers).

"My entire career I've always worked with great men and great women, so I've never felt like, 'Oh the man's held me down. This is my chance to get back at the man,'" Waggener said. "I've always been really supported by great people. It's more about a celebration, a celebration of women's accomplishments."

It's not men, per se, that Waggener has to worry about now as a small brewery owner. The biggest threats to her business are the megabrewers, corporations like the one she was booted from when it was turned into AB Inbev in 2008.

Companies like AB InBev have stepped up tactics in recent years to buy out craft beer brewers and confuse consumers about what's craft and what's locally owned.

"I really embrace the craft beer culture because now, with 20/20 hindsight, you see what the AB wholesalers have done to try to squash the craft beer business for so long," Waggener said. "That's why I'm thrilled that in North Carolina you can self-distribute. You don't have to get into those relationships with wholesalers if you don't want to."

The former Anheuser-Busch-employee-turned-craft-brewer said she supports the Craft Freedom movement, which fights locally against laws that make it hard for local brewers to grow their business, and plans to look into ways she can help them.

In the short term, though, her battle is simply finding ways to let people know where she is.

Bold Missy is located on Anderson Street, tucked behind the Renaissance townhomes at the northern tip of the NoDa neighborhood. Shortly before the opening, the city closed Sugar Creek Road, which was a popular way to enter NoDa from the north and would have brought plenty of traffic by the brewery. Then, after the opening, the city also shut down E. Craighead Road, another popular way of getting into the northern part of the neighborhood.

Waggener said the construction, brought about by the Blue Line extension that will eventually make Bold Missy more accessible, has hurt business, but recent openings across the street make her optimistic.

"It's definitely impacted our business, because as soon as Craighead closed, you could see a significant dip in the traffic," Waggener said. "But what has helped is that they've opened the Sherwin Williams, and the Crown Station [Coffeehouse & Pub], so that has helped bring some more traffic back this way."

Divine Brewery will also open across the street in early 2018.

For now, Waggener is enjoying learning the business firsthand and serving the neighborhood folks while playing a waiting game with the nearby construction. Waiting, however, is not how she got the nickname Bold Missy.

"We knew we'd be out here on an island for a while, but I think everything is moving this way, which is great. It's just waiting it out," Waggener said, before busting out in laughter. "But patience is not one of my strong suits."