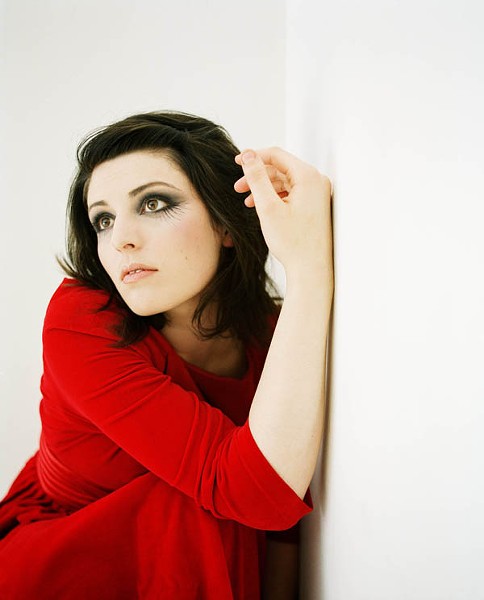 It sounds like something from The Godfather. "Once you're in the Puscifer family, you're in," Carina Round says by phone from Los Angeles. "As soon as Maynard heard that I was releasing a single, he said, 'Why don't you open the shows? It makes sense.'"

So it is that Round, who also sings with Puscifer, will open the upcoming tour dates for the latest side project of Tool frontman Maynard James Keenan, including a stop at Charlotte's Ovens Auditorium on Nov. 27. Her latest solo album won't be released until spring 2012, but her solo set will be comprised of completely new songs.

"I'm excited, but also obviously a little nervous," Round says. "It's gonna be a lot of work. There are also a couple of things that Puscifer have up their sleeves that I can't really talk about, but it adds another bit of workload. I won't be doing a lot of unhealthy things, that's for sure. I'll be laying low, eating lots of salads and vitamins. Hopefully I'll still be alive at the end of it."

While the as-yet-untitled album, her fourth studio effort, would have been released if it was completed before the tour started, Round says there's enough available online that the songs won't be completely unfamiliar. A couple of TV shows featured "Pick Up the Phone" and radio plays "Girl and the Ghost." The album's first single, "The Last Time," features a Puscifer remix of "Girl and the Ghost" by producer Matt Mitchell as the B-side.

"Everything on the album sounds different, which is why it's so difficult to pick a single," the singer says. "I could have picked any song and it would have been representative of the album, but also completely different from the other songs. There's a spine that goes through them all, which is essentially mine, but I pretty much just thought — fuck it, I'm not on a label, so I'll pick one of the weird songs as the single."

"The Last Time" is a dark tune that teeters between folk and rock with Round's vocals steering the ship amidst the smooth and choppy waters. "I've been doing this for a long time and been through a lot of ups and downs, and I've gotten to the point in my career that there's nothing going out there unless I absolutely love it," she says of the album. "That's the only music I'm going to make for the rest of my life."

Round has no plans to perform her remixed song with Puscifer, though she says some of the elements present on it may find their way into her own performances down the road. She first worked with Puscifer when she joined as a backing vocalist during the band's first full-length tour. She fell in love with their sound and slowly became more involved.

"Maynard asked me to come to Arizona to meet me and essentially have a job interview — it's been a long time since I had one of those," Round, who grew up in England, says. "I got a call a week or so later saying I was going on tour. Ever since then, it's been a lot of fun and a really creative process. I've learned a hell of a lot. It's been like going back to school."

Round is featured on one song from Puscifer's "C" Is for (Please Insert Sophomoric Genitalia Reference Here) EP along with numerous songs on the band's 2011 release, Conditions of My Parole. Being around the band to witness the songwriting process has sparked a new creativity in Round, as well as a new way to approach her own writing. She says sometimes Keenan will have ideas for harmonies, though he also allows her to organically come up with her parts.

While the 32-year-old enjoys her participation, she's also aware the band has a revolving door from album to album, and her future with Puscifer is unclear. "I never think that finitely about it," Round says. "I hope that I will continue to be a part of it. Everyone is local to the project. It's really just a relaxed and fun thing to be involved with. Don't get me wrong, no one's fucking around. Maynard runs a tight ship."

Regardless, Round is preparing for the release of her album and plans to hit the road next year to support it.