Capsule reviews of films playing the week of Sept. 14 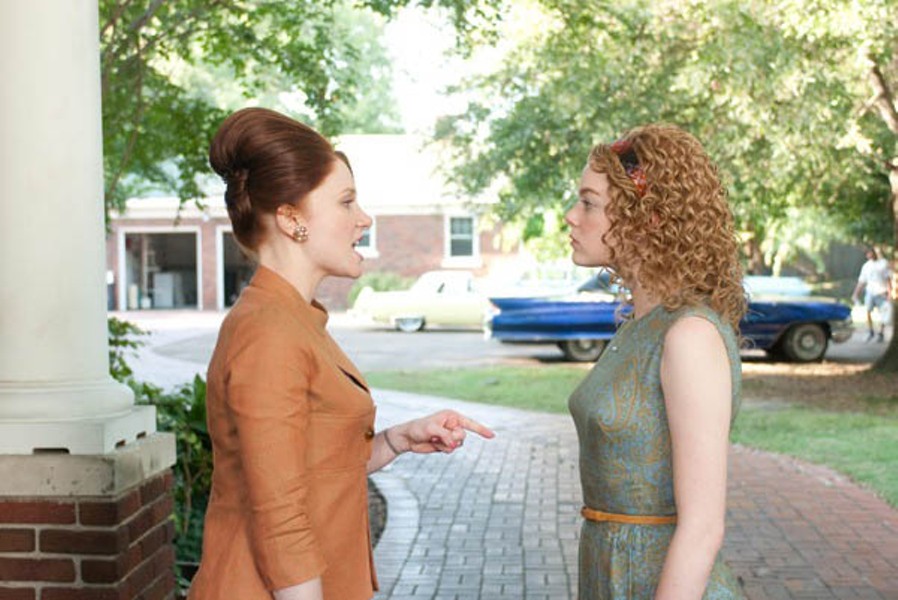 DIFFERENCE OF OPINION: Bryce Dallas Howard and Emma Stone in The Help

MR. POPPER'S PENGUINS Aside from Tom Popper (Jim Carrey) mistakenly believing that "BFF" stands for Big Fat Friend, the only original element to be found anywhere in Mr. Popper's Penguins is the character of Pippi, Popper's personal assistant and a Brit prone to parleying with prose that begins with the letter "p." The London-born actress with the terrific name of Ophelia Lovibond essays this role, and she provides a lift to every scene in which she appears. Unfortunately, she doesn't appear nearly enough to save this ghastly family film. A bastardization of the award-winning children's book, this finds Carrey cast as a ruthless businessman with daddy issues, spousal issues, and neglected kids issues. Mr. Popper has always placed his job above all else, but that changes after he receives a parting gift from his deceased father: six penguins (given names like Loudy, Bitey and Stinky) that take over his apartment and his life. The penguins seen in the picture are a mix of actual animals and CGI creations, and here's a quick primer for those unable to tell the difference: The ones acting normal are the real birds while the ones pooping in Popper's face or leaning over to break wind are the fake ones. Watching the real penguins, your have to feel sorry for them — in this picture, they get less respect than Rodney Dangerfield. Still, they fare better than Carrey, who's simply required to react to the wacky penguin shenanigans. Small children might get restless during the sequences in which Popper tries to patch up his relationship with his ex-wife (wasted Carla Gugino), but they'll otherwise be kept entertained by the animal antics. Adults, on the other hand, might want to stay away — as Pippi would doubtless note, this movie is putrid, puerile and painful. *

ONE DAY The title of the film One Day refers to July 15, though in truth, it refers to over two decades worth of that date. Beginning on July 15, 1988, when Brits Emma (Anne Hathaway) and Dexter (Jim Sturgess) graduate from college, attempt a one-night stand and then decide to remain lifelong friends instead, the picture checks in on the lives of the pair every July 15 through the present day. It's a high-concept gimmick that could go either way, and this one ends up parting straight down the middle. Emma starts out gawky, reclusive and toiling in obscurity, while Dexter is confident, charismatic and famous. The ensuing years impart the expected A Star Is Born career switcheroo, but the focus is mainly on the personal lives of these two best friends and whether they'll eventually decide if they should become romantically entwined or if they should even be buddies anymore (as Emma notes during one of Dexter's obnoxious phases, "I love you, Dext; I just don't like you anymore"). Considering director Lone Scherfig's previous film was 2009's excellent An Education — one of the best films of recent years — it's impossible to consider the frequently choppy One Day anything besides a disappointment. Still, that's not to say it's a total washout: The movie nicely captures the whiplash collision of youthful optimism with strenuous reality, and Hathaway and Sturgess are fine together and even better in their individual scenes. I would be even easier on the film if it wasn't for the last-act tragedy, a grotesque and clumsy development that's less a logical procession of the story and more a shameless stab at multiplex manipulation and pandering. **1/2

OUR IDIOT BROTHER After the likes of The Change-Up and The Hangover Part II (to name but two of a million), I was beginning to give up on ever again seeing any R-rated "man-child" movies that offered anything of value. Thank goodness, then, for Our Idiot Brother, which realizes there's more to this type of tale than scatological gags. Paul Rudd plays Ned, a clueless free spirit whose behavior alternately endears him to and alienates him from his three sisters: ladder-climbing reporter Miranda (Elizabeth Banks), frazzled wife and mother Liz (Emily Mortimer) and slightly ditzy bisexual Natalie (Zooey Deschanel). The film initially seems as shaggy and aimless as its protagonist, but it improves as it continues, with director Jesse Peretz having secured the right performers for virtually every role (Steve Coogan lends sneering support as Liz's unfaithful husband, while Rashida Jones is quietly effective as Natalie's brainy lover). And while the movie coulda/shoulda been longer than its scant 90 minutes, it's actually surprising just how much memorable material scripters Evgenia Peretz and David Schisgall pack into the piece. For a movie centering on an unabashed clod, it's a fairly intelligent work. ***