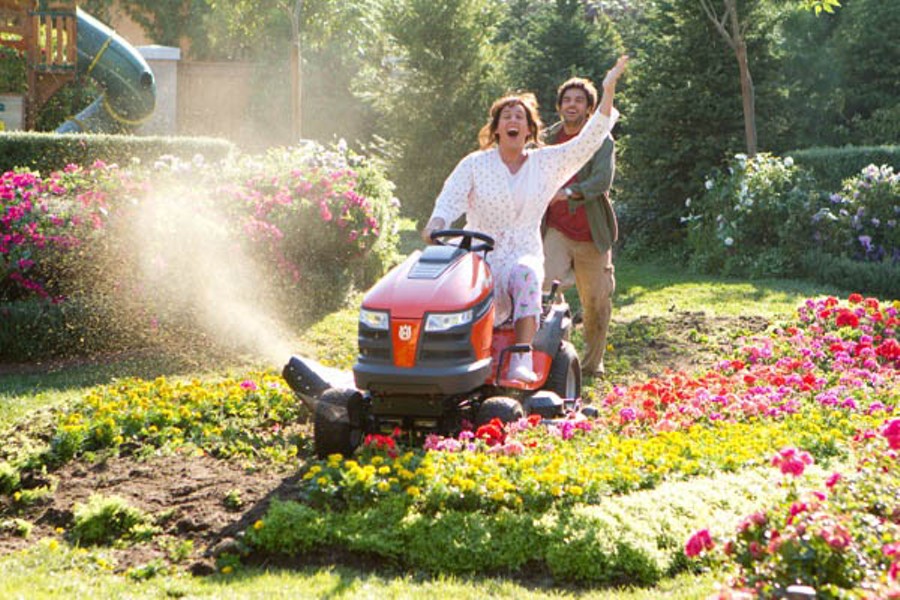 KUNG FU PANDA 2 Hollywood's obsession with 3-D — or, more accurately, the extra bucks it generates — is so out of hand that it would hardly surprise me to learn that 3-D remakes of Scenes from a Marriage and My Dinner with Andre are in the works. Yet for all of its uselessness when it comes to live-action films not named Avatar, the gimmick is a logical fit when it comes to animated efforts, as witnessed by its employment in (among others) Toy Story 3, Despicable Me and now Kung Fu Panda 2. Yet it isn't just that extra dimension that elevates this agreeable sequel to the 2008 blockbuster. As was the case with this spring's Rango, Kung Fu Panda 2 displays a terrific set design that's atypically detailed and vibrant for a toon flick. Whereas it was ace cinematographer Roger Deakins (True Grit) who served as visual consultant on that Johnny Depp vehicle, here it's Pan's Labyrinth director Guillermo del Toro who's billed as creative consultant, clear examples of studios not cutting corners when it comes to acquiring the best. KFP2's backgrounds are frequently so gorgeous to behold that aspiring art directors might further pad the film's box office haul via repeat viewings. Everyone else will probably be satisfied after one showing, as the serviceable story finds Po (returning star Jack Black) again teaming up with the kung fu masters collectively known as The Furious Five (Angelina Jolie and her underused co-stars Jackie Chan, Seth Rogen, Lucy Liu and David Cross), this time to vanquish a deadly enemy (Gary Oldman) who holds the key to Po's mysterious past. The kids will have a good time, and the adults will be entertained to the point that they won't secretly be wondering what R-rated film is playing in the adjacent auditorium. **1/2

LIKE CRAZY Three-quarters twee and one-quarter Glee, Like Crazy won the Grand Jury Prize at this year's Sundance shindig, beating out a slate of 15 other titles that included Take Shelter and Martha Marcy May Marlene. If nothing else, this stands as proof positive that even the film festivals can be as misguided in their selections as the notorious Academy of Motion Picture Arts & Sciences. The film won a second Sundance honor for the lead performance by Felicity Jones, an acceptable selection given that she's the best thing about this film in which LA college kid Jacob (Anton Yelchin) and British exchange student Anna (Jones) hook up, only to be separated by the ocean after she willfully extends her visa stay illegally and is booted back to the UK (that these adults would be so stupid in this post-9/11 age of stringent airport laws is a daft narrative concept, but we'll let it slide). The whole thrust of the film is that these two people should be together no matter what — think Shakespeare's Romeo and Juliet, Titanic's Jack and Rose, Brokeback Mountain's Ennis and Jack — but director Drake Doremus (scripting with Ben York Jones) doesn't make a very compelling case for his lovebirds. While it's easy to see Anna's adoration, Jacob won't even consider moving to England to be with his presumed soulmate, preferring instead to remain stateside and periodically take up with a co-worker (a wasted Jennifer Lawrence) who deserves better than the treatment he doles out to her.

Ultimately, Like Crazy is a love story about two often annoying people who don't have much discernible chemistry and are mostly bonded by their mutual love for Paul Simon. The singer's Graceland is referenced, but as these two prattled on, I only desired to hear the sound of silence. *1/2

MARTHA MARCY MAY MARLENE Make all the Mary-Kate and Ashley jokes you want, but don't dis Elizabeth Olsen. In Martha Marcy May Marlene, the younger sister of the Olsen twins delivers a breakthrough performance that will remind many of Jennifer Lawrence's excellent work last year in the similarly unsettling (though clearly superior) Winter's Bone. Olsen stars as Martha, who's long been under the thumb of a cult leader (John Hawkes, even more menacing here than in the aforementioned Bone) but finally works up the nerve to escape. She goes to stay with her estranged sister Lucy (Sarah Paulsen) and Lucy's husband Ted (Hugh Dancy), but since she's reluctant to talk about her experiences, the couple grow increasingly impatient with her odd behavior and violent outbursts. T. Sean Durkin, making his feature-film debut as both writer and director, establishes a chilling mood in the fascinating flashback scenes detailing Martha's life in the cult community, but it's the prickly turns by Olsen and Paulsen that save the family sequences, which make up the less interesting and more frustrating part of the film. The ambiguous ending will be loved by many, loathed by an equal amount; I feel there were better ways to conclude the story, but I understand that it comes with the art-house territory. ***