Capsule reviews of films playing the week of Feb. 25 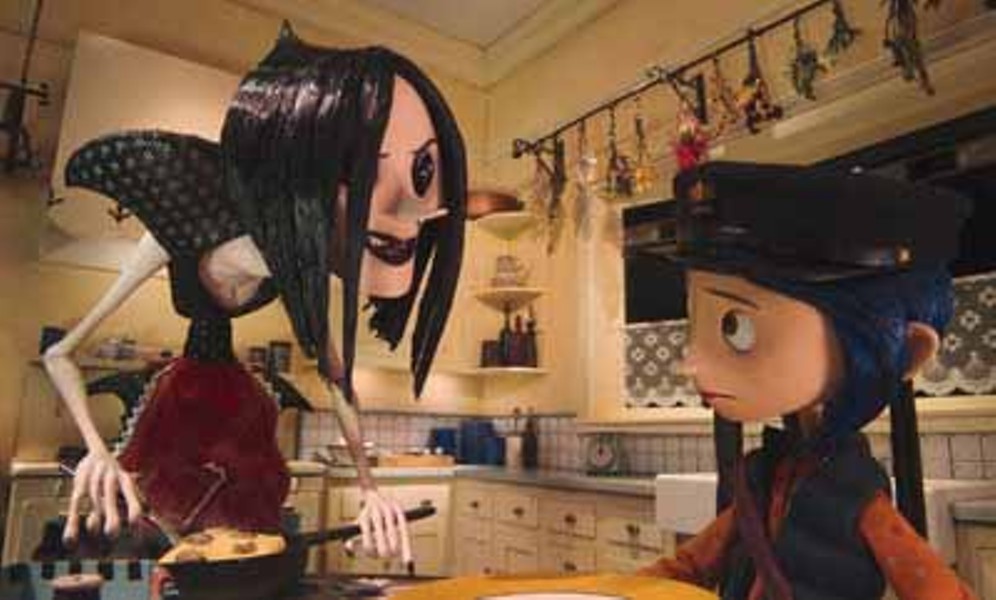 THE MOTHER OF INVENTION: The true nature of Other Mother (voiced by Teri Hatcher) is revealed to Coraline (Dakota Fanning) in Coraline.

TAKEN Moral ambiguity seems to be the order of the day in most of modern cinema (recent examples include Body of Lies, Traitor, The Dark Knight, and even Gran Torino), but for purely cathartic purposes, there's still something to be said about films – competent ones, mind you – in which the line between Good and Evil is drawn oh-so-clearly in the sand. Take Taken, which operates on a very simple premise: Scumbags kidnap Liam Neeson's daughter; Liam Neeson fucks them up good. That's all the plot needed for this lightning-quick (91 minutes, and not a second over) action yarn in which Neeson stars as Bryan Mills, a former CIA operative who took early retirement in order to live close to his teenage daughter Kim (Maggie Grace). Bryan's frosty ex-wife (Famke Janssen) approves of their child traveling unsupervised with a friend (Katie Cassidy) to Paris for a vacation, but the overprotective Bryan doesn't like the idea and only reluctantly signs off on it for the sake of Kim's happiness. But it turns out that father knows best after all: Within hours of their arrival, the two American teens are kidnapped by an Albanian organization that turns young women into prostitutes and sex slaves. Bryan immediately springs into action, jetting off to Paris and employing his ample CIA training to locate his missing daughter. The film's PG-13 rating means that punches are pulled in more ways than one, and the script by Robert Mark Kamen and Luc Besson (The Fifth Element) disappointingly turns Bryan from an ordinary man with highly specialized skills in the early going into a James Bond knockoff by the third act. But Pierre Morel directs crisply and efficiently, and Neeson delivers a typically compelling performance in (for him) an atypically muscle-bound role. ***

THE WRESTLER Randy "The Ram" Robinson (Mickey Rourke) was quite the big deal in the wrestling world back in the 1980s. But now he's long past his glory days: Looking more like a sack of potatoes than a human being, he still manages to secure an occasional bout, but things are so tight that he has to work a second job at the local supermarket. Two decades of hard partying have wiped him out, and if he has any emotional reservoirs to tap, he wants to save them for the two women in his life: a sympathetic stripper (an excellent Marisa Tomei) and his estranged daughter (Evan Rachel Wood). On paper, The Wrestler sounds like nothing more than yet another inspirational sports saga – a Rocky reconfigured for the wrestling rather than boxing arena. But Robert Siegel's screenplay fleshes out the basic storylines in unique ways, and director Darren Aronofsky and Rourke add a rich palette to the proceedings, resulting in a movie that's frequently as colorful as it is meaningful. For despite the constant hype about Rourke's tremendous performance, it would be wrong to think that this is simply a one-man show. On the contrary, The Wrestler examines not just one individual's life but also the presence of the sort of hazy nostalgia that keeps our celebrities propped up long after their achievements have given out from under them. Beyond that, it also lines up nicely with my only other four-star pictures of 2008, collectively presenting a portrait of the uncertain, often unhappy America in which we presently reside. If Milk touches on America's prejudices and The Dark Knight examines America's fears, then The Wrestler explores America's regrets, offering a rueful look at society on the fringe. ****