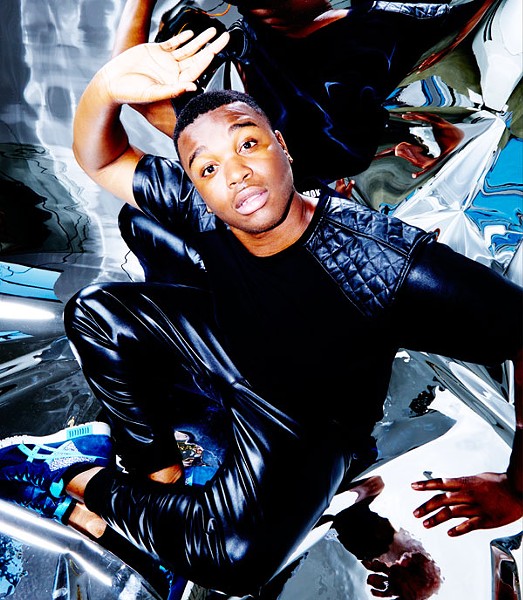 Cakes Da Killa may be my favorite new rapper. He had me at "gully cunt," which is how the Jersey-born rapper describes himself, and how I too have always thought of myself, although I was never able to put it into words so eloquent. Basically, it means a mix of gutter street sensibilities and fabulous femininity.

Yes, femininity. Cakes, who performs at Snug Harbor's Shiprocked on Aug. 14, is among the new wave of openly gay rappers in a genre that hasn't tolerated anything other than alpha males in 20 years.

But this is a new era. An era in which homophobia in mainstream culture is about as current as Windows 95 and a dial-up Internet connection. And even if some of our OGs, like Lord Jamar, are yelling at gay rappers to get off hip-hop's lawn, the culture should embrace a rapper like Cakes.

Why? Because he is a straight-up monster on the mic. He goes harder than Jamar ever did in his prime (yeah, I said it). He would easily rap circles around any of the new school Top 40 rap acts du jour, and he sounds like he might bite off chunks of their ears in the process.

Cake brags that he can, "spit that shit to make a homophobe a hypocrite." The only reason I'd be surprised if I caught Lord Jamar bobbing his head to a Cakes verse would be because the synth-y, bass-heavy beats Cakes spits over compel one to dance instead. It's damn near involuntary.

For much of the '90s, mainstream hip-hop's currency was guns and a body count. The 2000s, it was money and luxury items. This decade, it's swag, and Cakes is rich with it. He flosses everything from the latest Jeremy Scotts to a crown of pink flowers, challenging anyone who's mad about it with lines like "Doin' what I want to, what the fuck you gone do?"

At 23, he's one of the youngest artists to emerge from New York's underground ballroom dance scene. Both his mixtapes Easy Bake Oven Vol. 1 and The Eulogy were met with an enthusiastic fanbase and critical praise, the latter being released by popular streetwear brand Mishka NYC.

His latest, Hunger Pangs, was released in June and is available to stream on Cakes' Soundcloud. Some of the joints it contains are live enough to wake the dead, and some of the lyrics it contains shine bright enough to enlighten those dull individuals who would dismiss Cakes because of his sexual preference.

However, Cakes doesn't necessarily want to be seen as gays' ambassador to the historically unfriendly hip-hop nation. He told Out Magazine he just wants to be himself: "I came out in the third grade. This is just me being me. People make it sound like it's controversial and revolutionary, and that's weird to me, because in hip-hop you have people glorifying negativity like killing people and not taking care of your kids — and that should be scandalous! That should be what we talk about. An openly gay rapper shouldn't be breaking news."

He's right, it shouldn't be. But it kind of is, and it's about time.