Brian Heffron Has Kept Charlotteans Laughing for Decades, They Just Don't Know It

Bringing in the big guns

Brian Heffron is surrounded by legends, and that's the way he likes it.

The founder of Heffron Talent International and owner of The Comedy Zone Charlotte has built a comedy empire over the last 25 years with his impressive network of connections and friendships in the industry. The network is on display in his AvidXchange Music Factory office, where signed photos of comedy legends like Dave Chapelle, Ellen Degeneres, Jerry Seinfeld and Chris Rock — all much younger than they are now — adorn the walls.

Heffron's happy on this Monday morning; Kevin Hart's team of comedy protégés the Plastic Cup Boyz just finished a four-night run at The Comedy Zone and followed each great show with another one. Booking is Heffron's most important job, and he takes it seriously. This time, the "boyz" lived up to the endorsement of one of the world's biggest comics, and that's what matters to Heffron. Still, he couldn't help but crack a joke after having just received the bill for six bottles of Ciroc he comped for the trio.

"I don't how many damn plastic cups they filled," he laughs.

Heffron began working at the original Comedy Zone on Independence Boulevard in 1991. He bought in as a partner in 1996 and bought the company outright in 2000. The club moved to 8th and College streets before landing at its current spot at the Music Factory. During that time, Heffron was busy opening Comedy Zone locations in small to middle-sized markets up and down the eastern seaboard, from Charleston, West Virginia to Vero Beach, Florida.

He's responsible for booking about 150 shows a week — including any comedy show at Blumenthal's three theaters in Charlotte — and he'll do whatever it takes to get his comic.

Heffron was able to convince his pal Bill Burr to play the relatively small Comedy Zone by offering him Duke/Carolina basketball tickets just months after Burr sold out 2,400 seats at Belk Theater.

Heffron is hilarious in any conversation, his speech and mannerisms reminiscent of his friend Dave Attell, but you'll never see him on stage. His stage fright would take over if he tried, but he's never had interest in stepping into the spotlight.

So we counted ourselves lucky to sit down recently with him at his Music Factory watering hole Small Bar for a long chat about today's comedy scene in Charlotte and beyond. 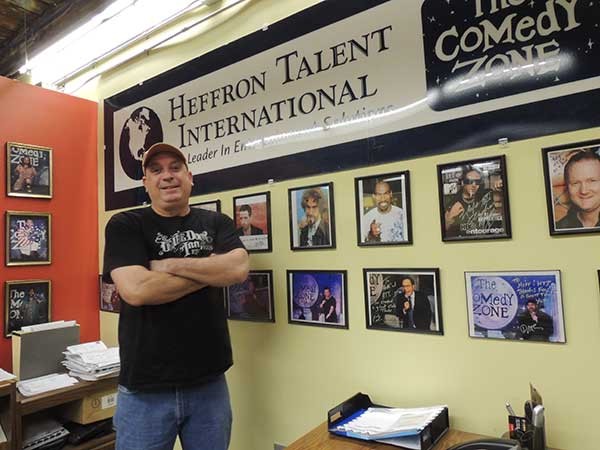 I was the kid listening to the albums; Richard Pryor, George Carlin, Cosby. I loved it. I knew that I would never be on stage. I don't want to be on stage, I just knew I wanted to be around it.

I took every job I could; manager, food and beverage, whatever was needed at the time. My initial thought was, I can take this somewhere, if I can just take over.

On his goals once he did take over

I felt like we could bring great comedy to these small towns and not need a big name in order to draw people in. There are so many unbelievably great comedians that only have a couple credits and they're just amazing. They're flying under the radar, but every one of these great comedians has become someone.

If I could feed them to mid-markets, I'd show them that you may not know the name yet but your experience is going to exceed your expectations.

When it comes to the bigger clubs, Charlotte being one of the biggest [Comedy Zones] in the country, I have to make economic decisions based on drawability, but I always, always put the customer experience first. No matter how popular they are, if you're not entertained, you're going to blame me, and I'm very respectful of that.

Now, I've got a lot of clubs. We have precedents, we can talk to people, I'm also very close with the owners at The Improv, Zanies, The Punchline, we're talking all the time. "Who's doing what?" Because the industry can change by six months. Amy Schumer was playing my club three years ago and six months later, she's Amy Schumer.

I have to be aware of the changing tides of this business. But if you can't deliver, you're not going to get the job.

On the importance of touring

The one thing that's great about our business is that you can't fake it. I know there's a YouTube thing going on, but my experience in the business is that the cream does rise to the top and it always has. Some of these comedians that I've worked with — Steve Harvey in his old days, Ray Romano in is old days — they were just so much better than everybody else.

What they did was, they were so good for so long that they couldn't be denied. It's a little bit different now but its kind of the same. Brian Regan doesn't have one TV credit to my knowledge, but he can sell out Belk Theater every year, why is that? Because he's tremendously talented.

On the proliferation of comedy platforms

Now we have more outlets, which also brings more acts, so we have to weed through a lot of acts to get to the cream of the crop. But now, someone like Tom Segura can be the highest rated Netflix guy without having to be on a sitcom and be the wacky neighbor or whatever. He can get to the masses quicker. He can get to you guys in a much more direct way.

Look at Marc Maron [host of WTF Podcast]. Marc Maron's career was meandering around for a while and he found his niche. He's probably one of the best interviewers out there and that's his thing. The cream rises to the top. I kind of love that, I really do, because back in the day there was only a couple of avenues and that cut out a lot of people. Now, take you're shot. You think you're that good? Take your shot. There's a million ways to do it.

On how Charlotte's comedy scene has changed

In the '90s, I could put a great comic on stage Tuesday through Sunday and we'd be full. In the 2000s, we started a transition into, "I don't know who that is." The city grew. The world grew. The comedy industry grew. It became a little more name-sensitive. I don't think that's a good thing for comedy. However, that is the game that we play and that is what we are. We're open six nights a week here, so we're getting different offerings on different levels on any given night.

On the importance of booking good acts, both big and small

If you come to my show, and you don't know who that person is, I need to blow you away. If you walk out of there and say, "Yeah, it was good," you're probably going to lose trust in the name Comedy Zone. But if you come in and you go, "Wow, that exceeded my expectations," I know I have a customer base that I can build and that's how the empire is built. It's a passion for the talent first. Growing acts and exposing acts is the absolute rubber-to-the-road concept that builds trust. I want you to trust me.

Pretty much every Wednesday night you'll see people who are touring to my other clubs. So they might come by Wednesday night to Charlotte but they'll be on their way to Charleston, West Virginia. These are top touring comedians, but they don't have any credits. If you trust me, and you spend the 10 bucks, you'll be blown away, because they're the guys who are the next stars. These are the next ones, every time. Because of the size of my network I can affordably bring in a great touring act for one night and let Charlotte take a peek.

On who's next in the Charlotte comedy scene

There are a couple people who come to mind who haven't quote "made it" but are doing great, and I think they're literally as good as it gets. That's Julie Scoggins and Paul Hooper. Paul is up in New York now grinding it out, but he's a Charlotte guy. Julie graduated from our comedy class. Julie is — or should be — the next big thing, and it's just a matter of luck and timing and getting seen by the right people. But these are local people. Darren Sanders is here. Tone X is out of Atlanta now but he used to be here on the radio. They're all tremendously talented.

On who's cultivating local talent

We have a tremendous asset in our stable by the name of Debbie Millwater, and she has been probably the most important person in local standup over the last decade. She cultivates people, she puts on really interesting open mics, not just, "Here's a bunch of guys who want to go up." She does Fight Night, and there's competition, and there's different levels. If you have 180 seconds you can walk off the street and go. Then she has Fight Night and you better be prepared to go head to head with some of the best.

Then you have Blayr Nias, who's doing Almost Famous, taking some of the more seasoned regional acts and putting them up there.

Then elsewhere around town you have Nick Alexander, who's doing tremendous work with Monstrous Comedy. Keli Semelsberger is probably one of the most important improv people in the southeast. People don't know about her. She's here and she's been doing it every week for decades. These are the real heroes. They're the ones bringing in and cultivating local talent.

On how he gauges feedback when a new act goes on

Social media is big, but do you know how I really gauge feedback? I stand in the back of the room and watch people pound the table and wipe their eyes. Then I know I did a good job. This is an art, and it's very, very important that we don't treat an art like a corporate entity. It's art. Every week, every night it's different art. Sometimes, you don't like that art, but you come back.

You don't walk into a LiveNation venue to see a thrash metal band, walk in and go, "I hate thrash metal," then go on Yelp and say, "LiveNation sucks, or Fillmore sucks or Underground sucks." You don't do that. Or at least you shouldn't do that, but people do. The reality is, you should do your homework, find out who's coming, find out if it matches up with who you like. Or come in with an open mind.

I don't want people to think Comedy Zone is just a chain. I don't know if they do or not, but I think that's important with some of the losses of our best music venues in this town — the true heart-and-soul music venues. I think it's a shame that this has happened but it is what it is. I'm a huge Double Door fan. Tremont was very important to me. The Milestone, Amos' [Southend]. It's important to me now — maybe it wasn't as important back then — that people know that Comedy Zone Charlotte is yours. It's yours. I have not been tainted by the corporate pen because I'm still over here swinging away as an independent.