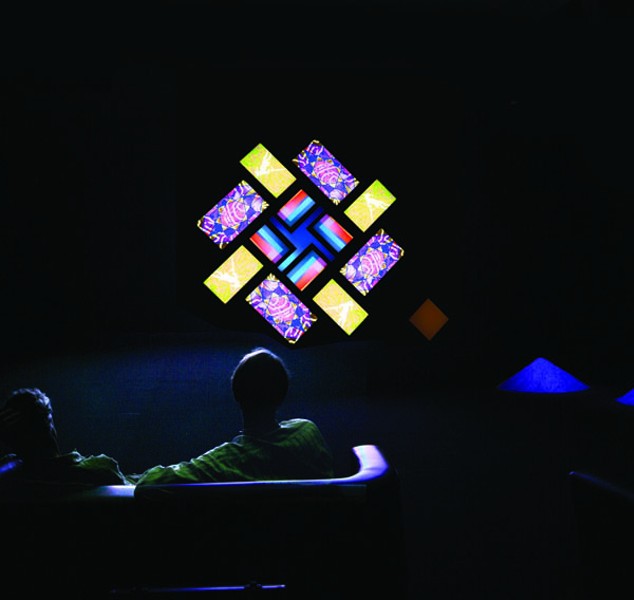 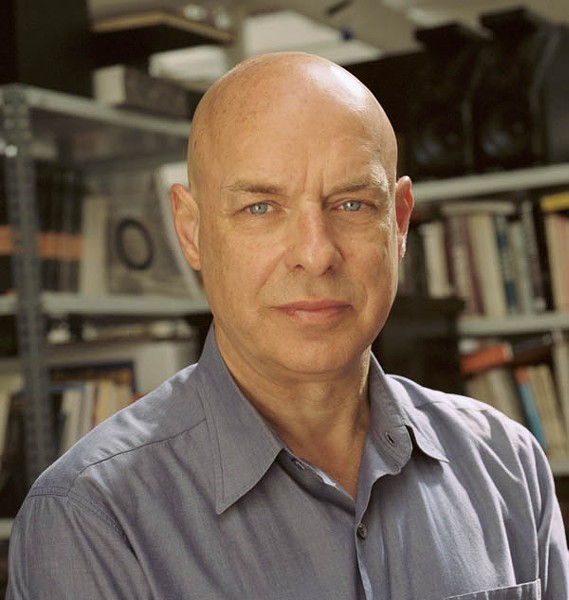 He's told the story a million times before — maybe even 77 million times! How he got the idea for his landmark ambient-minimalist masterpiece, Music for Airports, while sitting at Cologne Bonn Airport in Germany, admiring the building's breathtaking architecture. How, coincidentally, the airport's architect was Paul Schneider, father of one of his musical brothers-in-theory, Florian Schneider of German electronic-pop pioneers Kraftwerk. How everything was absolutely perfect on that gorgeous Sunday morning in Germany — except for the music in the airport. It was dull, drab, cheesy. Inconsistent with the ebb and flow of people moving through that magnificent space.

"I had a very clear concept," Brian Eno told a packed Thomas Wolfe Auditorium in Asheville on Oct. 29. "I thought it was really stupid that composers aren't working in a space like that. It didn't make sense to me."

Eno was in Asheville for MoogFest, the city's annual celebration of electronic music, to unveil his traveling multimedia art installation, 77 Million Paintings, for the first time in the Southeast. The exhibit runs through November at Asheville's YMI Cultural Center.

During MoogFest, Eno's airport story somehow carried more resonance than usual. After all, Music For Airports marked the beginning of his thinking on electronic multimedia presentation, even if in theory more than practice (although the piece was later installed, briefly, in a terminal at New York's LaGuardia Airport). What's more, right after the talk, one of Eno's biggest influences, Terry Riley, the godfather of musical minimalism, performed a hypnotic set of repetitive music in the same auditorium in front of a swirling backdrop. "Fifty percent of my ideas come from Riley," Eno told the audience.

Wearing — as he often does these days — a dress shirt and black suit jacket, Eno was giving what he calls an "illustrated talk." It was basically a college professor-like lecture with an overhead projector on which Eno made little squiggles, drew primitive pictures, and wrote lists of names like Reich, Riley, Copernicus, and Darwin.

It was hardly high-tech. But this is Brian Eno — one of the brilliant minds of late-20th century music and art. He's the guy who helped elevate the '70s glam rock of Roxy Music into a kaleidoscope of arty, electronic experimentation. He then took his musical ideas and androgynous look solo and created such timeless electronic-pop masterpieces as Taking Tiger Mountain (By Strategy) and Another Green World. Then, with the release of Discreet Music in 1975, he began his journey into the ambient music that would influence several generations of electronic artists, from the Orb to Aphex Twin to Radiohead. Since then, Eno has produced some of the more interesting acts in post-'60s art-pop, from Devo to Talking Heads to U2. Eno can pretty much do whatever he wants to on a stage in front of an audience and still fill an auditorium on a Saturday afternoon for almost two hours.

Eno was in the region not just to talk, though, but also to hype up 77 Million Paintings, a stunning collection of constantly morphing artwork presented on a huge black wall on 12 flat-screen monitors. Each of the "77 million" pieces — eight rectangular figures surrounding four smaller ones with a cross-like figure in the middle — evolve into endless configurations of scribbles and shapes in a rainbow of subtly different tints. But very, very slowly. You hardly notice that each shape has changed until it's a completely different image that still works together with the others as a complete piece. The images work on the mind as much as they do on the senses, in the same way Eno's ambient music does, and together, the music and visuals constitute the perfect multimedia marriage for the screensaver era.

Eno obviously didn't paint 77 million different pieces. That would take some 42,000 years. "If I spent my whole life trying to make all these paintings as separate entities, I wouldn't have gotten through even one ten thousandth of the number that this thing can generate," Eno said in an Apple website profile. "It's very prolific and economical. For very little input I get a lot of output."

Programmer Jake Dowie helped Eno create software that would self-generate the different images from 300 of the artist's hand-drawn works. The exhibit consists of semitransparent image files superimposed over background images and randomly rearranged in an infinite number of ways. And yet each piece is clearly in Eno's style — the same style you see in the cover art of, say, Music for Airports.

The work is mesmerizing and calming. Eno himself is mesmerized by it. He said on the Apple website that he appreciates being able to sit still in a dark room and see things in his own work that he's never seen before. "And it does it all day, every day," he said. "It's creating combinations and clusters that are genuinely surprising to me and sometimes breathtakingly beautiful. It's fantastic."

At the Thomas Wolfe Auditorium, Eno told the audience, "It's a bit embarrassing to be such an unashamed fan of your own work." Actually, he didn't seem too terribly embarrassed.