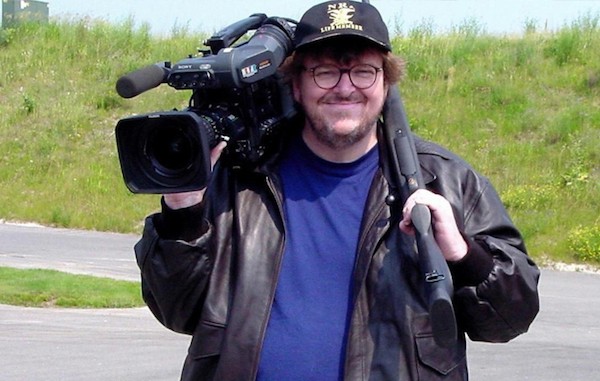 BOWLING FOR COLUMBINE (2002). An Academy Award winner for Best Documentary Feature, Bowling for Columbine remains a hard-hitting treatise that, in typical Michael Moore style, might stretch the facts in spots but continues to matter in a nation in which too many dolts place the welfare of their guns above the welfare of their own children. (And, speaking of that Oscar win, let’s not forget that many in the audience booed director Michael Moore as he accepted his award and denounced “fictitious President” George W. Bush for “sending us to war for fictitious reasons”; how idiotic do those cowards and sycophants look now?) Detractors will claim that this film, so skewed that Marilyn Manson ends up coming across as the most logical of all the interviewees, is nothing more than a typical liberal diatribe taking pot shots at easy targets — they’re right, but then again, so is the movie in its examination of American arrogance and idiocy. Moore takes exceptional aim at the satanic National Rifle Association: He allows goober members to ramble on until they hang themselves, and the picture concludes with him landing an interview with rabid NRA spokesman Charlton Heston, a legendary movie star but a somewhat reprehensible human being. The moment where Moore tries to get Heston (who passed away in 2008) to acknowledge a photo of a little girl killed by a single gunshot is particularly harrowing. Bowling for Columbine isn't a subtle film; instead, it makes its case with Magnum force.

Blu-ray extras include a retrospective making-of featurette; a discussion of Moore’s Oscar speech (complete with the actual footage from the broadcast); and Moore’s 2002 appearance on The Charlie Rose Show. 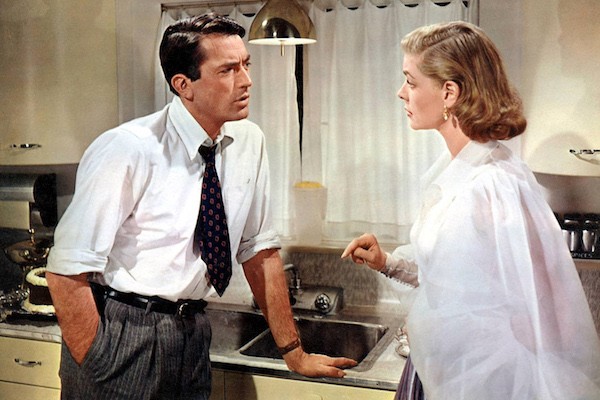 DESIGNING WOMAN (1957). Designing Woman earned George Wells the Academy Award for Best Story and Screenplay Written Directly for the Screen, and it’s interesting to note that 1942’s Woman of the Year similarly won a scripting Oscar (Best Original Screenplay) for its wordsmiths, Michael Kanin and Ring Lardner Jr. After all, director Vincente Minnelli’s 1957 comedy initially plays like a remake of the earlier picture, a Spencer Tracy-Katharine Hepburn vehicle in which a sports writer and a political columnist get married despite their differences and then wonder if they acted too quickly. In Designing Woman, Gregory Peck plays the sports writer while Lauren Bacall is provided a different vocation, that of clothing designer. Peck’s Mike Hagen is happy attending boxing matches and playing poker with his friends, while Bacall’s Marilla Brown hangs out with creative types and is thrilled to be designing the costumes for an upcoming stage musical. What Marilla only discovers too late is that the production will star Lori Shannon (Dolores Gray), Mike’s former girlfriend; for his part, Mike keeps trying to cover up his amorous past while also contending with a corrupt fight promoter (Edward Platt) who’s not thrilled with the accusatory articles Mike’s been penning. The uproarious “ravioli scene” is the movie’s most famous interlude (Peck tribute shows often would employ it to demonstrate the actor’s underrated comic chops), but there are plenty of memorable set-pieces in this effervescent effort that also includes a choice role for Mickey Shaughnessy as punchy ex-pugilist Maxie Stultz.

Blu-ray extras consist of an interview with costume designer Helen Rose and the theatrical trailer. 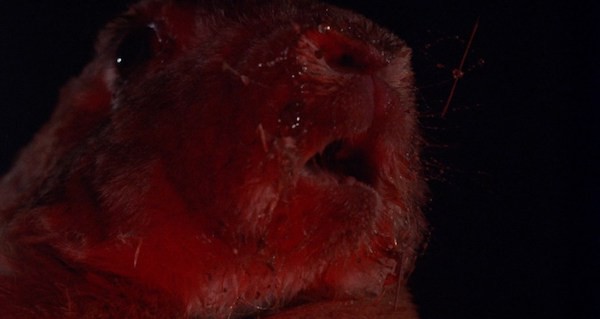 NIGHT OF THE LEPUS (1972). In the Medveds' 1980 book The Golden Turkey Awards, Night of the Lepus was one of the five nominees for The Worst Rodent Movie of All Time, along with The Killer Shrews, The Mole People, The Nasty Rabbit and the wholly deserving winner, The Food of the Gods. It's certainly one of the silliest movies of all time, since the monsters terrorizing the good citizens of an Arizona town turn out to be bloodthirsty, oversized ... bunny rabbits. It's up to a husband-and-wife team of scientists to stop the vicious critters, although it's hard to take anything seriously after a rancher (50-year-old Rory Calhoun) describes the pair (44-year-old Stuart Whitman and 45-year-old Janet Leigh) as "that young couple." Still, the dialogue comes across like vintage Woody Allen when compared to the quality of the visual effects, which basically consist of smearing some ketchup on the rabbits' choppers and having them hop around miniature sets (for a few scenes, the makers did break out the wallets to hire a guy dressed up in a bunny costume). Night of the Lepus was based on Russell Braddon’s novel The Year of the Angry Rabbit — Braddon wisely penned his tale as a comedy, which makes it even more amusing that director William F. Claxton and scripters Don Holliday and Gene R. Kearney attempted to make a serious horror movie about wascally wabbits. Clearly, Night of the Lepus is awful, but it deserves an extra half-star for its glorious kitsch value. And, yes, that's Star Trek's Dr. McCoy, DeForest Kelley, in a supporting role, frantically looking around for a transporter to whisk him off the set.

PACIFIC RIM UPRISING (2018). The sequel to Guillermo del Toro’s 2013 sorta-hit Pacific Rim, Pacific Rim Uprising really isn’t any worse than its humdrum predecessor and in some ways manages to even top it. Hence, if you enjoyed the first film, you’ll likely enjoy this one, and if you didn’t ... well, you know the routine. Despite del Toro’s efforts to make the first picture in the grand tradition of Ray Harryhausen and Ishiro Honda, the overwhelming clutter and drab characters skewed a little too close to Michael Bay movies. Pacific Rim Uprising offers more of the same, with one notable exception. Instead of deadwood Charlie Hunnam as the lead, we now get charismatic John Boyega as the heroic pilot who returns to the military-industrial world of the Jaegers just in time to tackle a new Kaiju threat. Inspiration appears to have taken the week off in the scripting department — the characters are flavorless and the plotting repetitive — but on the bright side, newcomer Cailee Spaeny shows promise as an orphan who has built her own mini-Jaeger named Scrapper (this franchise’s marketing answer to Porgs, Ewoks and Bumblebee). As for the marquee attractions, the Jaegers and the Kaiju, they engage in some battles that are sure to titillate the faithful. Like del Toro (and unlike Bay), director Steven S. DeKnight at least can stage action scenes that are accessible rather than incoherent, although a little of them goes a long way. There’s about as much entertainment value in watching two Rock ‘Em Sock ‘Em Robots pummel each other on the kitchen table as in watching these monoliths monotonously mutilate each other on the screen — and the battles are a lot shorter, to boot.

Blu-ray extras include audio commentary by DeKnight; deleted scenes; and various making-of pieces discussing both the human characters and the Jaegers.

UNDER CAPRICORN (1949). Aside from raves from the leading French critics of the day (see the Blu-ray extras section below), Under Capricorn has long been considered one of Alfred Hitchcock’s weakest features, even by Hitchcock himself. While the film does include several elements that link it to The Master’s more accomplished works (indeed, the married couple at the center might well have been Rebecca’s Mr. and Mrs. de Winter stripped of a happy ending but retaining a frightful housekeeper), it’s at heart a period melodrama, a genre that proves to be an ill fit for the director. Ingrid Bergman, superb in Hitchcock’s Notorious, and Joseph Cotten, excellent in his Shadow of a Doubt, are less impressive in this languid picture set in 19th century Australia, with Bergman playing the frail wife of a local bigwig (Cotton). Both share a dark secret from the past, and it takes the arrival of a jovial gentleman of little means (Michael Wilding) as well as the dastardly machinations of their housekeeper (Margaret Leighton) for the truth to bubble to the surface. With Under Capricorn, Hitchcock continued the innovative camera techniques he explored on the previous year’s excellent and underrated Rope, but in this instance, the experimentation adds little to the finished picture, as nothing could distract from the ponderous storyline. Or, as leading Hitchcock scholar Donald Spoto once astutely observed, “Too often motionless, the camera seems indifferent, as if actors had to keep talking until the film ran out.”

Blu-ray extras consist of audio commentary by film historian Kat Ellinger; audio excerpt of the legendary Hitchcock/Truffaut interviews; a 2006 documentary short in which French director Claude Chabrol (Story of Women) discusses his days at Cahiers du Cinema and the opinions of the various writers (including Truffaut and Rohmer) regarding Hitchcock; and the theatrical trailer. 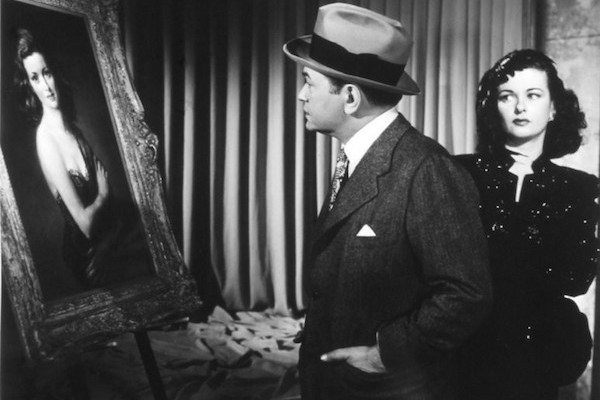 THE WOMAN IN THE WINDOW (1944). One of the best of the approximately two dozen films directed by Fritz Lang during his two-decade stint in Hollywood, The Woman in the Window stars the great Edward G. Robinson as Richard Wanley, a respected professor who’s home alone as his wife and kids are out of town on vacation. While admiring a storefront portrait of a beautiful woman, he’s startled when said model, Alice Reed (Joan Bennett), appears in the flesh and introduces herself. This chance encounter eventually leads to Wanley accidentally killing Alice’s enraged and abusive suitor (Arthur Loft) — aware of Wanley’s prominent position, Alice helps him cover up the crime. But it’s an impossible situation, since Wanley’s best friend (Raymond Massey) is the district attorney who’s leading the investigation and since the victim's bodyguard (Dan Duryea, wonderfully oily) knows the score and attempts to blackmail Alice. Adapting J.H. Wallis’s novel Once Off Guard, screenwriter Nunnally Johnson presents a particularly tasty slice of film noir, and Lang ratchets up the suspense until a beauty of a twist ending. (The twist has since been done to death in movies and on television, but when I first caught this film on TV as a kid, it blindsided me, as I suspect it did to moviegoers back in ’44.) The success of The Woman in the Window convinced Lang to reunite Robinson, Bennett and Duryea for the following year’s Scarlet Street; that one (reviewed here) is almost as excellent.

Blu-ray extras consist of audio commentary by film historian and author Imogen Sara Smith (In Lonely Places: Film Noir Beyond the City) and the theatrical trailer. 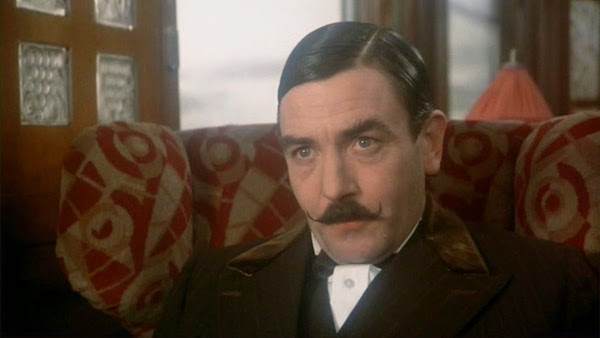 MURDER ON THE ORIENT EXPRESS (1974). A year after helming Serpico, director Sidney Lumet returned with a different type of crime flick, an engrossing adaptation of the Agatha Christie novel which proved so popular that the ensuing years saw other filmmakers helping themselves to Christie properties. In this one, Belgian detective Hercule Poirot (Albert Finney) finds himself surrounded by 13 murder suspects after a vulgar American millionaire (Richard Widmark) gets stabbed to death in his train compartment. Could the assailant be the victim's nervous assistant (Anthony Perkins)? The quick-tempered military man (Sean Connery)? The meek missionary (Ingrid Bergman)? Or did the butler (John Gielgud) really do it? Nominated for six Academy Awards, this snagged the Best Supporting Actress statue for Ingrid Bergman, surely one of the most blatant examples of the award being given for career longevity rather than quality of performance. She's not bad in the film, but she's no better than any of the other supporting luminaries in the cast (most notably Lauren Bacall). The real knockout performance comes from Finney, deservedly Oscar-nominated for an eccentric turn that's unlike anything else he's ever attempted before or since. Best to skip Kenneth Branagh’s recent lackluster adaptation and stick with this one. (Amazon Prime)