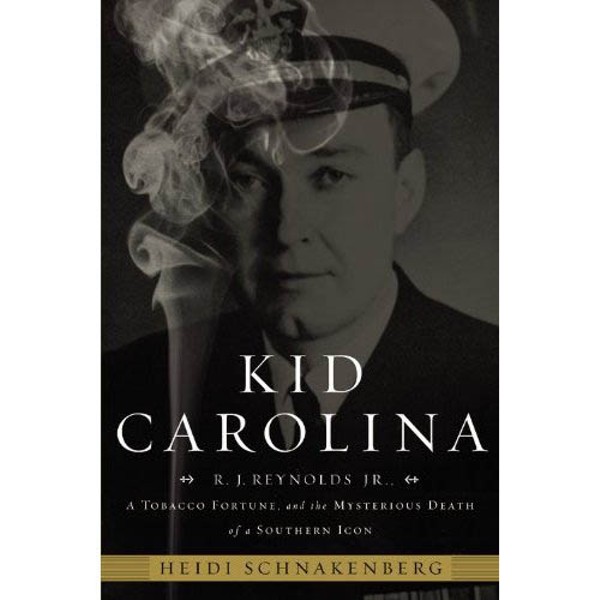 If any one person ever personified the adage "Money can't buy happiness," it was R.J. "Dick" Reynolds Jr., of Winston-Salem. An heir to one of the great tobacco fortunes, Reynolds spent a life surrounded by lots of money. How much money we're talking about can be surmised by this sentence regarding Dick's father, R.J. Reynolds Sr.: "By the turn of the [20th] century, R.J. was rumored to have single-handedly created thirty to fifty millionaires in North Carolina." Again, that's the book's subject's father.

Dick Reynolds, the heir, loved being rich, found new ways to increase his wealth, and did a great amount of good for many good people and causes while becoming a legend of American philanthropy and a familiar feature of American public life. But "happy" wasn't the first word that came to mind at the mention of his name. In this compelling, multi-faceted biography, author Heidi Schnakenberg details Reynolds' life as a bon vivant investor, chain-smoking drunk, poet, excellent sailor, businessman, philanthropist and philanderer. He was a driven man, and it drove him to do great things for others, while he made members of his family miserable and destroyed his own health.

In his heyday, news of Reynolds' activities, marriages, politics and increasingly eccentric behavior regularly entertained the masses, who were always ready to hear stories of a man who lived his life any old damned way he saw fit. It was an extraordinarily busy and interesting life by any standards, and the author's research has unveiled much new detail.

Still in his late teens, Reynolds developed an avid interest in aviation and earned a pilot's license. At 21, he gained access to a large trust fund, helped develop the first American amphibious planes, and founded Reynolds Aviation. During this same period, however, he launched his habit of living lavishly (some called it a dissolute lifestyle), of days and years filled with drinking, expensive cars, expensive gifts for a slew of women, only some of whom were his wives, topped off by nearly constant smoking, and yet more drinking. At 28, he killed a man while driving drunk, served five months in jail, then bought a steam freighter and piloted it around the world for three years. Afterward, Reynolds came home to Winston-Salem, married Elizabeth Dillard, herself an heiress to another tobacco fortune, had four sons, started a factory for making color motion picture film, and helped Delta Airlines survive against Eastern Airlines, which had angered him by refusing to make Winston-Salem its hub.

On and on Reynolds went, getting elected mayor of W-S in 1940, at age 34, where he rammed through one of the nation's earliest slum-clearing and public housing projects. The next year, he became chairman of the national Democratic Party's finance committee. Reynolds, though, was a true obsessive, on a constant quest for new ventures, so he quit politics and joined the Navy when the U.S. entered World War II, during which he earned a Bronze Star at Iwo Jima. Just to stay busy, we suppose, he also made time to amass another fortune, this one in the wartime ship-building business.

After the war, Reynolds divorced, married the actress Marianne O'Brien, whom he suspected now and then of trying to kill him, and started taking part in yachting regattas. The couple had two sons, one of which, Patrick, would later lead a national anti-smoking group, some say because he saw what cigarettes did to his father. Dick divorced Marianne in 1952 and quickly married Muriel Greenough of Georgia, with whom he'd been having a scandalous (for the time) affair. Muriel's point of view is often the primary one in this biography. This time, Dick stuck with marriage for eight years.

And we haven't even mentioned the philanthropy. Reynolds and his sisters were phenomenal givers away of family money. They founded the Z. Smith Reynolds Foundation in 1936, with Dick as president. During its illustrious history, the organization has funded a large number of crucial projects in the Carolinas and Georgia, including the creation of an anti-syphilis program that was so successful, the government later modeled the national program after Reynolds'. The chain-smoking, hard-drinking multi-millionaire also founded an important marine research facility in Georgia, donated land for Wake Forest University, funded numerous parks, hospitals and an airport in Forsyth County, and even donated the family home for a library.

In 1960, Reynolds divorced Muriel, who had grown tired of his marriage "style," which involved lots of screaming, angst, and flying objects. He re-married a year later to Annemarie Schmitt, who, it seems, convinced him to disinherit all his children and leave everything to her. Soon after changing the will, he died of acute emphysema. Reynolds' was an astonishingly full life, and Schnakenberg does a good job, although not a particularly lyrical one, of capturing that life in all its glory, accomplishment, self-destructiveness and dysfunction.