The exterior of La Madeleine in Charlotte.

On Monday morning, folks gathered in the parking lot of La Madeleine Country French Café in anticipation for the chain's grand opening in Charlotte and ... for bread. The restaurant gave cards out with monthly slots for free bread for a year to the first 100 people to walk through its doors. "Rompre le pain," or as the French phrase goes "breaking of the bread together," goes just fine with one of the restaurant's signature jams — including, strawberry rhubarb and blackberry. 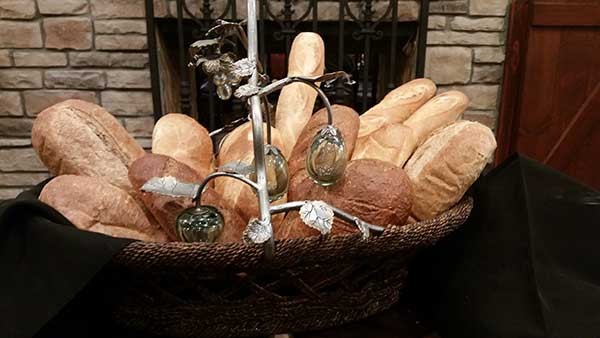 Located directly across from Northlake Mall — where Mimi's Café was before shutting down due to a fire — La Madeleine brings something different to the table. The 7,500-square-foot space has a country feel with vaulted ceilings, wood frames, a fireplace and cozy nooks with personal touches. It's a chain, headquartered in Dallas, Texas, and expanding fast through franchising ops. For Kyle Hakim, who is operating the new Charlotte location as a franchisee via his vice president title at R. Hakim Corp., it's a dream in the making. He's been eating food from La Madeleine locations in Texas, where he grew up, since he was a kid. The Charlotte location is his company's third venture — they opened La Madeleine's in Atlanta, Georgia in March and Cary, North Carolina in July of this year.

The first La Madeleine, named after the historic church in France, was established in 1983 by Patrick Esquerré, who deems himself a "French country boy." Over the years, dishes have been added to the menu and cooking has been fine tuned for expansion. Open for breakfast, lunch and dinner, Monday-Friday from 6:30 a.m. to 10 p.m., it's a different kind of French experience. This is no Amelie's French Bakery and it's no Lumiere French Kitchen either.

"It's more comfort type French food," says Hakim. "There are sandwiches, soups, pastas, salads. For any new guest coming in, I'd suggest trying our café sampler, which includes three items — a soup, a salad, and a hot plate — from our café line."

The Chicken Friand la Madeleine is listed under the "café classiques" section of the menu and is comprised of tender chicken, mushroom, onion and Swiss filling in a flaky puff pastry shell that's topped with a creamy wild mushroom sauce. It's Hakim's favorite item on the menu and having tried it, I can see why. Though it's not quite a casserole, it has the feel of a hearty, chicken pot pie. Breakfast is made from scratch anytime of the day and includes savory options like quiche. The Lorraine features ham, bacon and Swiss custard and the Florentine features spinach and Swiss custard. Both come in a flaky, savory pie crust. Homemade soups include options like country potato and tomato basil. Served in tiny shot-like cups during a recent media night, these are surely a go-to as winter weather approaches. The Pasta la Madeleine is a penne pasta sautéed in a creamy wild mushroom sauce with balsamic marinated chicken or shrimp. There's also broccoli and diced tomatoes giving the dish a fresh, light feel despite being heavier with the starchier counterpart.

As cafeteria-style eateries grow more infrequent, La Madeleine brings something different to the tray as well. Growing up on K&W Cafeteria, a small NC-based chain of Southern comfort foods, there's a sense of nostalgia in the serving line at La Madeleine. But the "eyes are bigger than your stomach" rule applies as you pass by the many tempting food items this new café has to offer. La Madeleine's also offers catering — from croissants and sandwiches to pastas and other menu items. All in all, this new Charlotte restaurant is worth visiting. And while it's not your classic and sometimes snooty French cuisine, it's got good food in a laidback atmosphere. There's something for everyone. You can come hungry and leave filled or, if that's not enough, take some of the store's bottled goods with you.