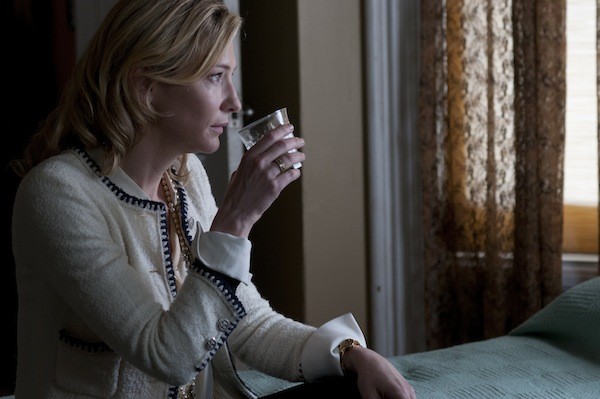 Over the span of approximately four dozen motion pictures, Woody Allen has funneled inspiration from such literary and cinematic giants as Leo Tolstoy, Ingmar Bergman, Federico Fellini and even Bob Hope. With Blue Jasmine, he has opted to go full-on Tennessee Williams.

In Allen's latest picture, Jeanette "Jasmine" Francis (Cate Blanchett) is the 21st century reincarnation of Blanche DuBois, the tragic figure at the center of Williams' enduring masterpiece A Streetcar Named Desire. The tale begins as Jasmine moves from New York City to San Francisco to stay with her sister Ginger (Sally Hawkins). The siblings couldn't be more different: Whereas Jasmine is used to wealth and prone to flights of fancy, Ginger operates in a working-class milieu and tends to be a pragmatist. But because Jasmine's Bernie Madoff-like husband Hal (Alec Baldwin, seen in flashbacks) turned out to be a crook, a financier living off the funds of his clients until he was caught, Ginger has taken pity on her now-homeless sister and has invited her to stay with her until she can get back on her feet. It's a situation that proves stressful for everyone, including Ginger's uncultured boyfriend Chili (Bobby Cannavale). Compounding matters is that Jasmine has always been a trophy wife and thus is totally unprepared to live in a real world that requires her to have skills of some sort. She does find employment working as a receptionist for a dentist (Michael Stuhlbarg), but most of her time is spent guzzling booze and complaining about her lot in life.

Allen makes no apologies for his lead character's infuriating behavior, and neither does Blanchett. Jasmine Francis is the sort of person who causes acquaintances to cross the road to avoid talking with her — she's obnoxious, overbearing, self-centered, conceited, vapid and deceitful — and yet, miraculously, we sympathize with her more than expected, thanks to Blanchett's intuitive performance. It's a superb turn, though it would be neglectful to overlook the contributions of Hawkins, Cannavale and, shockingly, Andrew Dice Clay. Clay, a vile stand-up comedian and failed movie star back in the day (anybody remember the 1990 bomb The Adventures of Ford Fairlane? I do, unfortunately), seems to have had his name plucked from a dusty Rolodex by Allen — it was a good call, though, as he draws a lot of emotion out of his role as Ginger's ex-husband Augie, a working stiff whose life was ruined by Hal's Ponzi scheme.

The Blanche-Stella-Stanley triumvirate channeled through the characters of Jasmine, Ginger and Chili keeps the film rooted in the Streetcar district (and interestingly, two of the cast members starred in stage versions, with Blanchett playing Blanche in an Australian production and Baldwin portraying Stanley on Broadway and in its subsequent TV-movie adaptation). Yet in addition to paying tribute to Williams, Allen also seeks to comment on the repeated financial crises that have shattered this nation, showing that while they may have further divided the haves from the have-nots, they've nevertheless managed to claim victims from every tax bracket. It's in this light that Jasmine Francis emerges at her most sympathetic: Like the title figure from last year's The Queen of Versailles, an excellent documentary about a wealthy family losing it all, she's idiotic rather than evil, and in the final count, that does make a difference.